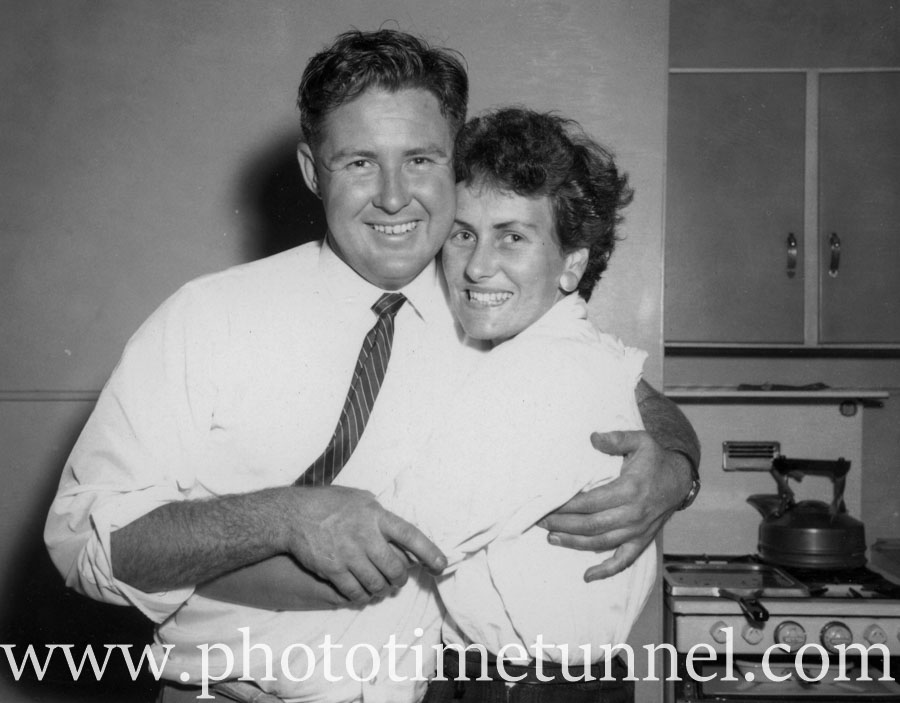 BECOMING a photographer was Ron Morrison’s second choice of career.

He’d have preferred to be a teacher, but a combination of lack of self -confidence and chance led him to the lens. ”I wasn’t sure I’d get the marks I needed to become a teacher, so in 1948 I took a job as an assistant in a photographic studio in Newcastle,” Ron recalled. A man from Tindall Studios in Hunter Street had visited Ron’s school to sing the praises of photography as a career, and Ron, who had mucked about taking photos with a box Brownie since his childhood, went for an interview and got the job. He didn’t enjoy it. Turning prints in the dark room and taking random photos of beachgoers didn’t appeal to the 14-year-old. But friend Roy Cotterill at The Newcastle Morning Herald and Newcastle Sun opened a door to a cadetship as a press photographer. Ron was hired by the paper’s chief photographer and legendary lensman Milton Merrilees, and he started work just before Empire Day in 1949. The two papers had four photographers already: Arch Miller and Tom Hall on the Herald, and Cec Piggott and Milton Merrilees on the Sun.

These were the golden years of the press, with newspapers the largely unchallenged bringers of news to the population. In Newcastle The Herald and Sun fought for scoops against the Newcastle bureaus of The Sydney Morning Herald, The Daily Telegraph and The Mirror. Ron recalled travelling to jobs by bicycle or, more often, on buses, with his cumbersome camera gear advertising his business to every other passenger. One of his very earliest jobs – at the tender age of 15 – was to photograph prizewinners at Newcastle Home Science High School. Unknown to the young photographer, the excited dux of the girls’ school was his future wife, Elizabeth. ”We met up again a few months later at the school dance. She mentioned that she’d been photographed by the paper and it turned out I was the photographer,” remembered Ron. He gave her a print of the photo and romance blossomed. Five years later the pair were married, formalising what became an exceptionally productive lifelong partnership.

Before the wedding, however, there was the matter of National Service. Ron served six months with the 87th Photographic Squadron of the RAAF, starting in March 1952 in Canberra but serving most of his time at Townsville. The aircraft their squadron used were Mosquitoes. “I went back to work after six months and the editor didn’t even know I’d been away,” Ron laughed. Even though Liz duxed her year, her parents wouldn’t let her continue her education, a fact she always resented. After school she worked in a building society office across the road from the Herald. She paid board at home and saved money so she could pay for her own wedding. “My family was a little odd,” said Liz. “My father was an English sailor who jumped ship and met my mother, whose parents were Scottish. My mother’s parents disapproved very strongly of my father because he was English, so they had a registry wedding. My father needed a witness for the wedding, so he went out onto the street and offered 10 pounds to anybody who would do the job. That was a lot of money then,” she said.   “During the war, when there was a fear that the Japanese would invade, my mother took my sister and I into a bedroom, opened a drawer and showed us a gun. If the Japanese came, she said, she would use the gun on us. It was a traumatic thing to be told,” Liz recalled.

Shortly after their marriage, Ron was sent to Singleton to cover the destructive 1955 floods. It was a frightening assignment, and Ron was lucky that – as he was leaving – he grabbed a little Retinette camera and some 35mm film to supplement his usual kit. As it happened he ran out of film whilst away on the job and the spare camera saved the day. “I had been scheduled to take aerials from an RAAF helicopter,” Ron said. “I had signed a waiver accepting the risk but before I could take the flight the chopper crashed at Maitland while trying to rescue two men.” In an army DUKW (amphibious vehicle) at Singleton there was another scare when the vehicle approached power lines trailing in the water near the Dunolly Bridge. “We knew people had been electrocuted in Maitland, we had a woman and two children aboard, and we didn’t know whether to stay aboard or jump out. Luckily the lines weren’t live,” he said. During the days Ron was away on this assignment his new bride, Liz, had no idea where he was or how he was faring. Liz, a good typist and shorthand note-taker, was to become a prolific freelance writer as well as a photographer in her own right. She was, in fact, to become Newcastle’s first female press photographer. In 1959 the pair established their own press agency, supplying photographs and articles to a variety of  markets. This came about when Newcastle Herald and Sun management banned their photographers from moonlighting for the Sydney papers. Ron calculated that there was enough press and commercial work available in Newcastle to support an independent press agency, so he quit The Herald.

The pair had a close relationship with the short-lived Newcastle Sunday Mirror, the city’s only Sunday paper to that point, which lasted just 80 issues. The paper was to become the subject for Ron’s PhD in later years, and he recently sold his complete run of the now-rare publication to a major Sydney library. Big stories covered by the agency included the 1959 visit of Princess Alexandra, the double-headless murder in Maitland in 1960 and the capture of fugitive killer Kevin Simmonds. It was possible to “gram” photographs across the country via the Post Office. Using this system, a photo could be sent from Newcastle to a capital city in six minutes, so Ron often used Polaroid equipment on fast-breaking news jobs to get pictures to customers in time for next day’s issue. Liz recalled one occasion when Ron had arrived late to a sporting fixture and had to make do with a dressing room shot. Liz rushed the shot to the post office but was told the photo couldn’t be sent because it showed one of the sportsmen naked below the waist. “I’d been in such a hurry I hadn’t even noticed,” Liz laughed. I moved the typed caption from below the photo and stuck it across the problem part and they sent the photo for me.”

By 1963 Ron and Liz wanted to start a family and decided to sell the agency to fellow photographer Roland Bryant and head to England to further their careers. The move wasn’t a huge success. Ron wanted to become a reporter and tried to learn to type. He applied for a job as a photographer on The Guardian, but didn’t get it. He took a job as a reporter on a little weekly paper, but Liz had to type up his stories for him and he became a sub-editor instead. The couple came back to Australia where Ron worked briefly on The Mirror in Sydney before heading out to Forbes for a country newspaper job. Liz had got a job there with a solicitor, and the plan was to put down roots for a while. It was Anzac Day, and Ron offered a piece about veterans playing two-up, only to be told that the town wasn’t ready to read such material. “I was shocked at how conservative the place was, so we turned around and left,” Ron said. “We arrived on Tuesday and were back in Newcastle by the weekend.”

Ron got a job as a court reporter, a massive ask for somebody without shorthand or typing skills, and he eventually managed to beg his way back into the photographic department in about 1965. Meanwhile, Roland Bryant invited Ron and Liz back into their old agency, even offering vendor-finance to entice them. They accepted, but the partnership was a failure. Ron and Liz again set up their own business – Press Photographs Newcastle – which they ultimately sold in 1970 to another press photographer, Ron Bell. (Ron Bell famously won a Walkley Award in 1979 for his coverage of the Star Hotel riot.)

Ron said the lowest point in his newspaper career was covering the story of two children drowned in a canoe accident at Raymond Terrace. Getting to the job was dangerous and uncomfortable and the boat in which he was travelling had to be rescued by the air force, whose personnel on the spot forbade him from talking about it because of its risky nature. “When I got back to the office I had two photos: one of people in the boat and one of a helicopter flying overhead,” Ron said. “I was asked to superimpose the two shots to put the helicopter and the boat in the same frame. I tried to refuse but in the end I did it. I was really ashamed of myself and that helped me decide to quit for good.”

Liz graduated in arts at the University of Newcastle in 1972 and began teaching history. She was a convocation member of the university council for six years. Ron did an MA in graphic design 1981 at the University of Central England, and a PhD at the University of Wollongong in 2001. Both have had extremely active careers in the arts and academia. Ron taught at the National Art School in Sydney in the 1970s and was head of the department of visual arts communication at Newcastle College of Advanced Education for three years from 1985 to 1987. Liz taught professional and media writing in the school of communications at Charles Sturt University. The pair has collaborated in numerous books, not limited to the Newcastle area. Ron published many of his books with journalist Alan Farrelly.

Ron and Liz donated a large collection of negatives to Newcastle Region Library, and in 2017 transferred another large batch of material to Greg and Sylvia Ray, following collaboration on the book, Newcastle in the 1960s.

Ron Morrison passed away on July 29, 2022. His last year of life was punctuated by his second major flood experience. The house he was occupying with his son and family at Woodburn, near Lismore, was inundated and many of his personal records and photos were destroyed.