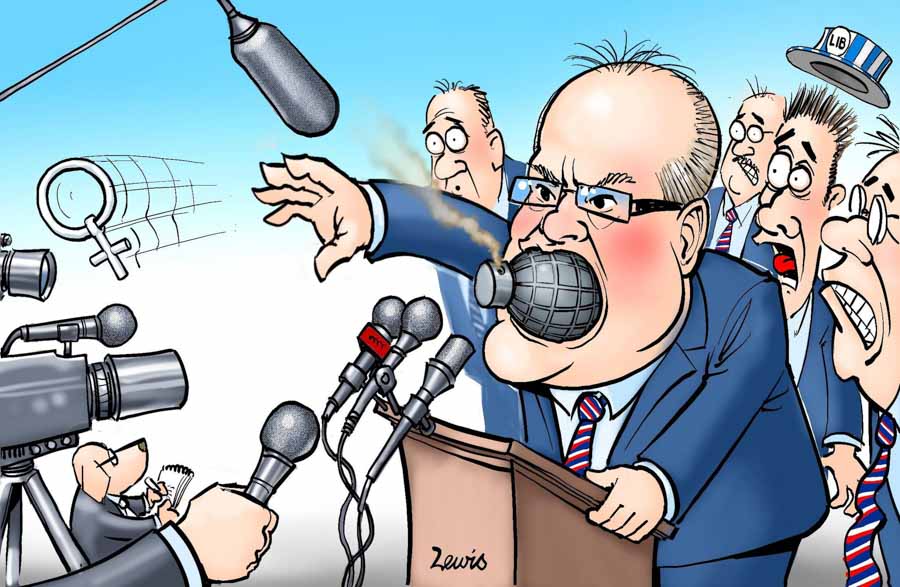 You would have to be an idiot to do what Scomo did yesterday.

Our cardboard cut-out alleged prime minister used a press conference on the subject of serious sexual misconduct by male Liberal Party staffers in Parliament House to attack journalists for asking questions. That’s not the idiotic bit. That’s just standard Scomo: avoid the question, walk away, bluff and bluster. The idiotic part was where he accused journalists working for the Augean Murdoch news stable of “sitting in glass houses”. The alleged prime minister alleged that News Limited’s Sky News outfit was facing its own internal investigation of a matter allegedly involving a woman being harassed in a toilet.

Except it isn’t. There is no such investigation. The PM got fully briefed on a non-existent dunny harassment inquiry relating to a Sky News employee, but never heard a whisper about a full-on alleged rape in Parliament House? This bloke should let go of the hose.

I also don’t know what it is about the men in this alleged Government that brings them to tears when their attitudes to women are questioned. First we had the Attorney-General, Christian Porter, weeping as he fronted the press to deny historical rape allegations against him. And now the prime minister fights back tears as the steam roller of Canberra sleaze looms large before him.

Fighting back the tears

Did he fight back tears when discussing his wife-induced epiphany about the wrongness of a woman being allegedly raped in Parliament House? No, he didn’t. Did he struggle to control his emotions when contemplating the possibility that one of his front benchers might have raped a woman a long time ago? Didn’t look that way, although he declined to read the allegations so perhaps that helped shield his feelings.

But when he’s under the gun for allegedly misleading Parliament about what looks a lot like a sloppy half-arsed attempt to cover up his government’s failure to respond in an adequate or humane way to the alleged rape in Parliament House, the poor chap gets weepy. How does he reckon that looks? Naturally he explains his teariness by reference to his wife and daughters, who always get a mention when the going gets tough. I assume he imagines that evoking his innocent female family members will buy him some sympathy and, I think, in the beginning it probably did. But the routine is wearing thin.

Frankly, Scomo has been out of his depth from day one, and now he is seriously up Shit Creek. If there was such a thing as a Federal Opposition he would be on the ropes and close to finished.

The steam roller that made Scomo cry, in my opinion, consists essentially of the unravelling of some of his lies and obfuscations over the Parliament House rape allegations. Just last week the alleged prime minister told Parliament that his loyal minion Phil Gaetjens, Liberal Party faithful and head of Scomo’s department of prime minister and cabinet, was pushing ahead with an alleged inquiry into the handling of the rape allegations.

Gaetjens, readers might recall, was the same person appointed to “inquire” into the so-called Sports Rorts scandal, where the Morrison government perverted a program that was supposed to help sporting groups across Australia, turning it into a massive political bribe fund. Mr Gaetjens “inquired” into the matter and found everything was mostly fine. Of course it was outside of the terms of reference he wrote for himself to ask whether the apparent chief political operative in the affair, Bridget McKenzie, had acted within the law when she helped direct money to marginal Coalition seats at the expense of more deserving applications from other areas. It turned out he spoke formally to exactly two people, and he didn’t examine any role in the scandal that might have been played by Scomo or any of his staff or advisers.

Naturally Scomo would be quick to appoint a man of such talents to the vital inquiry tasked with finding out who knew about the Parliament House rape allegations.

It turns out that when Scomo was telling Parliament how his old mate was pushing ahead with this important inquiry, he’d already been assured by old mate that the inquiry had been “paused”. We know this because old mate Gaetjens told senators in estimates who asked him the question. And old mate followed up by explaining that the Australian Federal Police had told him to pause his “inquiry” because the AFP was having an “investigation” of its own and didn’t want wires getting crossed.

I pause here to observe that this is the same Australian Federal Police force that goes rifling through the underwear drawers of journalists who offend the government, but was unable to find out what happened when federal minister Angus Taylor trumped up claims that Sydney City Council had spent irresponsibly large sums of money on travel. Remember that? Taylor got stuck into Sydney Lord Mayor Clover Moore (who is hated by the Liberal Party) on the basis of a document that turned out to be fake. He claimed when challenged that it had been downloaded from the council’s website, but this was quickly shown to be false.

Asked to investigate, the AFP quickly announced that there was no evidence of wrongdoing – nothing to see here, move along – and dropped off the case. It then emerged that the AFP “investigation” failed to interview either Taylor or Moore.

So good luck hoping that either “inquiry” into the rape matter produces anything. On past form the diligent investigators will either forget to interview any witnesses, or perhaps follow the lead of the NSW Police in the matter of the Porter rape allegations. In that instance Constable Plod cited COVID-19 fears as a reason for not interviewing the key complainant before her untimely death. Old mate Gaetjens admitted his own inquiry would be useless when he told senate estimates that he wasn’t even planning to interview the rape complainant, Brittany Higgins, because he wanted to respect her privacy. Oh please.

What happened when old mate Gaetjens blamed the AFP for making him pause his “inquiry”? The AFP commissioner, Reece Kershaw, denied doing any such thing. Luckily for everybody commissioner Kershaw later remembered that he did actually ask old mate to drop off the case, more or less, which certainly saved face for old mate.

This is your vibrant Liberal democracy, folks. I hope you appreciate it.

Just to help you appreciate it even more, Scomo and Co this week appointed former Liberal MP Sophie Mirabella to the Fair Work Commission, on a salary of no less than $387,000. Ms Mirabella was a big fan of John Howard’s WorkChoices, so we know how this is going to play.

You love this stuff, don’t you?

Your future may depend on READING “the news”.