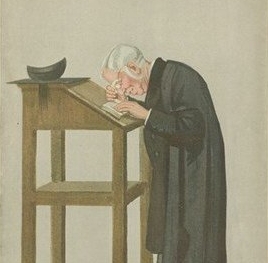 My problem with spoonerisms started a long time ago. Once I heard about poor old Reverend Spooner and his habit of accidentally transposing the first letters of words in an expression I started doing it myself – deliberately. Once I started I didn’t seem able to stop, and now they tend to spring automatically into my head.

Somebody tells me that it’s pouring with rain, for example, my brain does the transposition and, hey presto, it’s roaring with pain instead. Years ago when my daughter made a sticky date pudding I couldn’t help instinctively renaming it a dicky state pudding and mentally proposing it as the ceremonial dessert of the state of NSW.

An old nickname of mine was a spoonerism: instead of calling me Greg Ray, some wag devised Reg Gray and for some time it stuck. I didn’t like it much but hey, it was better than Grey Rag.

As soon as they were old enough I bought my kids that great book, Spooner or Later, just to get them on the right track. It’s a picture book by Paul Jennings, Ted Greenwood and Terry Denton and it’s full of preposterous illustrated spoonerisms. Around the borders are the original versions, such as “a pocket full of rye”, while somewhere on the page you have to find a picture representing the spoonerism: “a rocket full of pie”. It’s very funny, but when the original is “not out of the snows” you can imagine the picture of the spoonerism. Same with “a shoe on the paw”.

From time to time in our house, while the kids were growing up, we had days when a person about to have their daily wash might announce their intention to shake a tower. A half-formed wish was likely to become a half-warmed fish and instead of doing the chores you might find yourself chewing the doors. A person accused of nicking their pose was likely to protest that they were just nubbing their rose.

Rude spoonerisms abound. Remember the Pheasant Plucker’s Song that was so popular a few years ago? Apparently that had a spoonerism hidden somewhere in it. If you have a spooneristic mind you inevitably balk at asking to see anybody’s tool kits and similar inhibitions might prevent you from recommending Dickens’ otherwise interesting book “A Tale of Two Cities”.

On camping trips it is unwise for compulsive spoonerisers to ask married acquaintances if they’ve brought their sleeping bag. You don’t advise drug-addled acquaintances to have a hot pie and you should be careful who you call a shining wit.

For a while I was in the habit of talking to our dog in spoonerisms. Instead of telling him he was a smelly dog I’d say he was a deli smog, which connoted interesting pongs of cheese and cured meat. Or he might be a dunny fog, which makes me think of opening the toilet door after somebody else had recently been there. Occasionally he was a dairy hog, which I suppose suggests a pig with a liking for milk.

When playing cards you must take particular care. The eight of spades can become a fatal epidemic and the eight of hearts betrays a dislike of aesthetic display. The four of hearts should be removed from the pack for obvious reasons and put to one side with the six of diamonds.

Bleak reflections on 9-11 and after