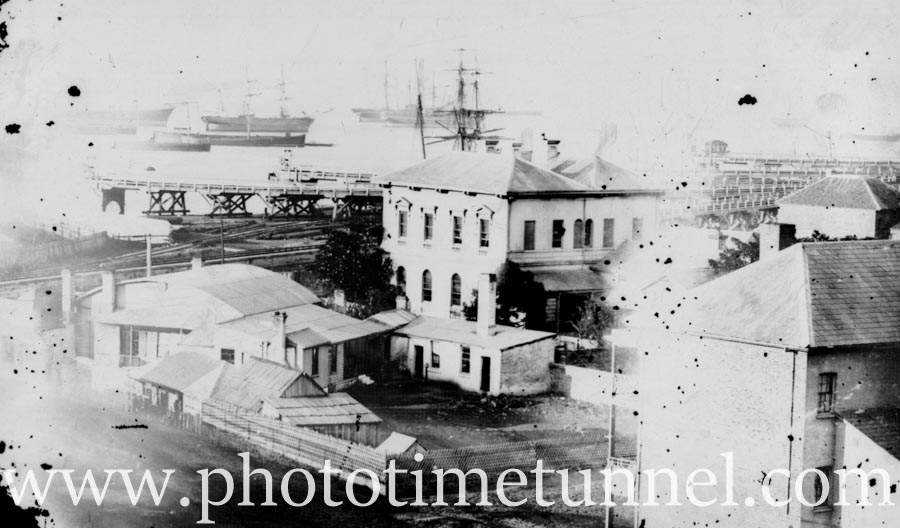 Tracing advances in the technology of recorded images is fascinating, particularly in relation to specific places. Not only does the place change over time, but the nature of the images changes too.

In the period since European settlement of Newcastle, NSW – originally a prison-labour camp for political and intransigent convicts – one can trace the evolution of images from freehand sketches, to engravings and then to photography. Early photographs are predictably rare. Newcastle was not a prosperous or appealing place at the time that photography was being born. Nevertheless, some quite old photographs (or images derived from photographs) are known to exist.

This rare and wonderful view of the old town, which perhaps dates to 1862, is certainly among the oldest images of Newcastle of which I am aware.

This image, which may have been derived from a photograph, appears in a series of postcards produced by the printers Davies and Cannington. In some versions the date is suggested to be 1870.

Another view in the Davies and Cannington postcard series, said to be 1870.

A view of The Hill, above King Street, Newcastle, 1870, as depicted on the postcard (above) and the photograph from which it was derived (below).

Perkin Street, Newcastle, 1870. Postcard above, original photograph below. At the top of the winding goat-track of a street are the Catholic church of St-Mary-by-the-Sea and the Wesleyan Methodist church. When the Wesleyan church was demolished a small house was built nearby for the caretaker of the tower-like harbour leading lights, one of which can be seen in front of the church.This light was demolished in 1918, leaving only one of the two.

The above two photos come from an album once owned by the Scott family, now in Sydney’s Mitchell Library. Thanks to Michael Sternbeck for drawing my attention to them. They can be seen here. Michael’s blog on Australian Catholic history can be seen here.

A delightful real-photo postcard of Newcastle Harbour Regatta, 1875. From our Norm and Daphne Barney collection.

The photo above is said to have been taken in 1865, to mark the opening of the new iron bridge across Hunter Street. The bridge was built by the all-powerful Australian Agricultural Co to carry coal to the waterfront for loading. Long-promised but slow to materialise, the bridge replaced the old wooden structure seen in front. The photo belongs to Mrs Daphne Barney, whose great-grandfather (one-time Newcastle Mayor Colin Christie) is believed to be one of the foreground figures. The gathering on the bridges included some of Newcastle’s most powerful men, as the caption shows.

For an excellent article about the Hunter Region’s earliest photos, click here.

A trip to “Town”: Newcastle as I remember it