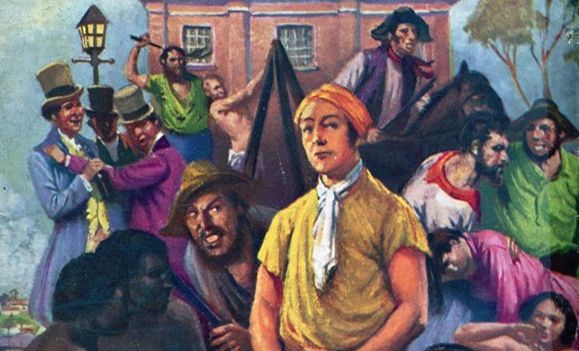 When the book The Adventures of Ralph Rashleigh was first published in England in 1929, it was assumed the tale was a straightforward autobiography by a convict in the British colony of New South Wales. Its descriptions of life in the colony, and especially the miseries of convict existence, were so vivid and plausible that it wasn’t hard to believe it might be a first-person account.

But though the book was based on a manuscript that was certainly produced by a New South Wales convict, the truth was more complicated that it had seemed at first. The manuscript, titled Ralph Rashleigh or the Life of an Exile, was written on colonial government paper, with a watermarked date of 1840, and signed “Giacomo di Rosenberg”.

The manuscript was “discovered” by contemporary historians in 1920 when the Royal Australian Historical Society held an exhibition of rare books and manuscripts. An elderly man named Robert Baxter attended the exhibition, bringing with him four old manuscripts which he said had been left to his wife, Margaret Burnett, by her father who had received them from their author decades before. One of the manuscripts included a piece of paper that had been torn from the register of assignment of convicts at Port Macquarie and in 1949 Colin Roderick, an editor with the Australian publisher Angus and Robertson, decided to research the manuscript and learn whatever he could about its origins.

It took two years of intensive research for Roderick to discover that the author of the manuscript was a convict named James Tucker, whose handwriting appeared on colonial documents at Port Macquarie, where he had been employed as storekeeper to police magistrate William Nairn Gray. The more Roderick dug into Tucker’s history, the more evidence emerged to support his conclusion. Tucker had, for example, used the pseudonym “Rosenberg” in the blackmail letter that led to his original conviction. It was also clear to Roderick that the work was not intended by Tucker to be an autobiography but rather a novel.

Tucker spent some time in the Maitland district where he presumably gathered some of the material he used in his writing. Although he was not personally assigned to the harsh penal settlement of Newcastle he evidently gathered plenty of first-hand material from men who did spend time there. Indeed, those interested in Newcastle’s colonial history have long enjoyed the descriptions in Ralph Rashleigh of the awful conditions endured by convicts assigned to the coalmines and to lime burning.

Tucker squandered many chances at rehabilitation, re-offending or falling foul of petty tyrants in the colonial system. His productive heyday, it seems, was during his period at Port Macquarie where he appears to have written a number of manuscripts – mostly plays. William Nairn Gray was probably his “patron”, having helped establish the Port Macquarie Literary Club.

Roderick was instrumental in the publication of an unexpurgated version of Ralph Rashleigh in 1952. For those interested in the story of the manuscript the 1953 third impression is probably the preferred edition because of its updated foreword in which Roderick provides a good history of Tucker’s career.

Roderick also had published Tucker’s play Jemmy Green in Australia, providing in the volume a comprehensive background to this interesting document and its relationship to the Hunter Region of NSW.

Sadly, much of Tucker’s literary output has been lost, though hopes remain some manuscripts may emerge from obscurity. Roderick mentioned skits entitled Old Tumbledown (about the dilapidated “theatre” in which the Port Macquarie plays were staged), Makin’ Money (about the Rum regime in New South Wales) and Who Built That Cosy Cottage? (about the colourful North Coast identity Major Archibald Clunes Innes). Two lost prose works are The Life of Mary Nailer and Fearless Frederick Fraser.

Chapter 24 of Ralph Rashleigh offers a glimpse into what it might have been like for a convict from Sydney, condemned to Newcastle for extra-severe punishment:

Accordingly, one day . . . about 130 miserable beings . . . were linked to a long chain and marched through the streets, heavily ironed and strongly guarded, until they reached the public wharf, where a small colonial coasting vessel called the Alligator was then lying in readiness to receive them.

They were duly marched on board and were stripped quite naked before they were permitted to descend into the hold, that appeared to have been prepared for their reception, a rough floor having been laid over the shingle ballast. As fast as each man got below he was secured by his fetters to a chain, which in its turn was strongly fastened to the planking beneath, so that it was absolutely impossible for him to walk, even if the height of their place of confinement had permitted such a motion. But this was by no means the case as . . . the distance from the floor to the upper deck could not have been more than three and a half feet at the furthest, and the vessel being very small, the number of men referred to were actually squeezed in so tight that it was perfectly impossible for them to lie in any position other than on their sides, while from their close proximity one to the other, they quickly began to perspire so profusely that reeks of vapour almost as dense as smoke could be perceived rolling up the hatchway, the closing of which, if it were but for half an hour, must have resulted in inevitable suffocation for the whole herd of hapless wretches.

In short time the vessel unmoored and, the wind being fair, soon cleared the harbour and got out to sea, where a fresh gale appeared to be blowing, for the Alligator pitched heavily and shipped many billows, which, of course, making their way through the open hatchway in the hold, were at first hailed with delight by the parched sufferers below . . . But in a little while the water increased in their prison to such an extent that they were obliged to adopt very painful positions in order to keep their heads above it. For several hours did this continue, until the captain was obliged by a shift of wind to put into a haven under his lee called Broken Bay; and then the unhappy convicts thought themselves fortunate in having the water pumped off, leaving them the wet floor to repose upon.

In brief, their voyage lasted forty-eight hours, during which period they were parched with thirst, very few being so fortunate as to obtain a single drink of water. Half a rotten and mouldy biscuit to each man formed their sole sustenance; and to crown all, they were cramped into a noxious hole . . . where the mephitic vapour arising from the breath of 130 men was increased by ordure, urine and excrement of every kind, among which the sufferers lay perforce.

This scene of complicated horrors, the intensity of which was in no whit lessened by the ruthless character of the inmates of this floating hell, was at length brought to a close by their arrival at Newcastle, where they shortly afterwards landed, naked as they were, upon the beach, and were compelled to perform sundry very necessary ablutions before their clothing was returned to them.

. . . it fell to the lot of Rashleigh, with seventeen others, to be drafted for employment in the old coal mine, so called to distinguish it from another shaft which had been recently commenced. At the mouth of this work they were received by an overseer, the natural fierceness of whose physiognomy was not lessened by a plentiful griming of coal dust. He quickly called his clerk to take the likenesses of those whose ill fortune had newly subjected them to this oppression. The clerk, a miserable, half-starved, downcast-looking ragged being, soon performed his avocation with fear and trembling at the oft-repeated rude threats of his stern superior, and the men were lowered consecutively into the darksome orifice that appeared to gape for them.

On their arrival at the bottom of the chasm, a scene that had at least novelty to recommend it to our adventurer met his wondering gaze. Seven low passages appeared, that opened into the space around the termination of the shaft. They were dimly illuminated by small lamps; but at the farther extremity of each avenue there was a perfect coruscation of blazing lights, in front of which various groups of men were plying different branches of their thrift in toilsome haste, their extra diligence being apparently occasioned by the presence of the superior who had received the new-comers, a specimen of whose brutality they had an early opportunity of witnessing, for no sooner had he landed from the skep (bucket) in which he descended, than his vigilant eye rested on one of the waggons that a party of prisoners had dragged along one of the passages. This not being filled to his liking he, without any ceremony but with many distasteful terms of abuse and energetic oaths, began to lay about him with a stout cudgel he carried and dispensed his forcible favours so heartily that in a few seconds not one of the luckless gang belonging to the waggon in question was standing erect. After having thus knocked them all down he began next to beat them until they rose again and fairly cudgelled them off out of sight with the waggon.

On his return after this agreeable exercise, rather out of breath, he turned his attention to the newcomers and, dividing them into parties of six, he gave each subdivision charge of a waggon and these led the way through one of the long galleries followed by the waggons until they all arrived at the end, which was an open area of considerable extent where two or three large fires of coal were burning, by whose light, aided by that of their lamps, the miners were delving out masses of coal, at an immense heap of which he finally paused, directing a man who appeared to be overseer of this part of the work to “take the new chums in charge and set them on”. This was quickly done. They were told to fill their waggons with coal, to draw them back to the opening and there to upset the contents as the man at the shaft should direct them.

They continued to do this, stimulated by the blows and threats of their harsh taskmaster, until night when each received a small portion of boiled grains of maize and much less rotten salt beef which, with water, formed their whole food. The wretched miners soon after lay down in any part of the works they thought fit, bedding being here totally unknown except to the deputy overseers and clothing of any kind whatever unworn by the workmen. In fact, the extreme heat of this subterranean place of abode – arising from want of air and enhanced by the numerous fires maintained – would have rendered the lightest apparel an encumbrance. As for beds or blankets there were various heaps of sand which, being loose, were soft enough and on these such of the convicts as were curious about lying luxuriously used to repose themselves.

The luckless wretches condemned to this kind of labour only left the mine once a week, on Saturday afternoons, when they were all drawn up and compelled to wash themselves and their clothing in the salt water and after the latter articles were dry all were marched to the convict barracks where they abode until daylight on Monday morning at which they resumed their labour.

More graphic descriptions of life at the Newcastle settlement follow, making the book an interesting read if only for these portions.

By steamer overnight to Sydney