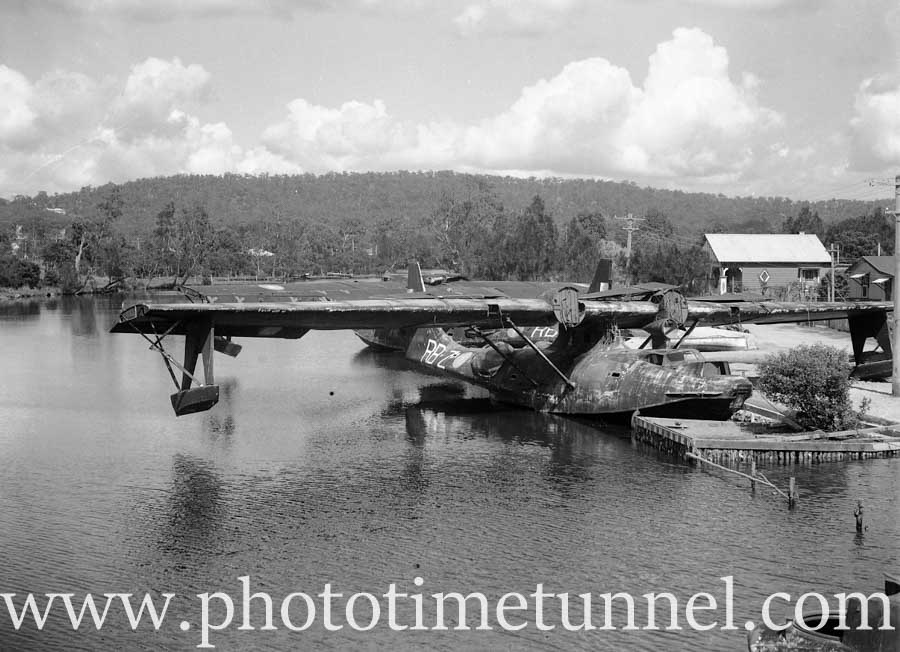 A Catalina flying boat at Stoney Creek, near Toronto, NSW, in 1947.

JOHN Cain was with his father, not long after the end of World War II, when surplus Catalina flying boats from the RAAF base at Rathmines were auctioned by the Australian Government’s Disposals Commission. “I think it was Newcastle auctioneer Don McHattie who was working his way along the rows of planes and calling the auction from the back of a T-Model truck,’’ John recalled. He said his father, also named John, bought the planes with an idea to turn them into accommodation at Stoney Creek, near Toronto. ‘‘At the time he bought them, people said he’d never get them across the lake and under the old Fennell Bay bridge without taking the wings off, but he did it, with the help of a bloke from the Royal Motor Yacht Club who owned a speedboat called ‘Pallsie’,’’ John said. ‘‘We used to play in the planes as kids. It was amazing what they left in them. They took out the engines and the armaments, but they left flare pistols, smoke bombs, maps of the Coral Sea and tins of rations that I used to take to school and share with other kids.’’

According to a report in The Newcastle Herald of March 26, 1947, Mr Cain bought 19 Catalinas all up, but at that time had only moved four to Stoney Creek. “He plans to let down awnings from the wings and cut a flooring space through them,” the report stated. “Eventually he will drag the seaplanes on to the land, placing them on slips so that they can be let down into the water if desired.” Mr Cain told the paper that although the planes carried a crew of nine or so during the war, he believed they would comfortably accommodate a family of four. He said he already had an Easter booking for one of the planes.

John Cain snr was a fiercely independent character who didn’t much like authorities trying to tell him what to do. Maybe that was because of what happened in the war, when the government confiscated the stock of his tyre business that once operated at the corner of Wood and Parry streets, Newcastle. ‘‘Dad was so pissed off about that, he up and shifted us all out to Stoney Creek. That was about 1945,” John said.

Out at Stoney Creek, John’s dad built a 23-cabin holiday park and a zoo. The cabins were all lit by electricity, supplied from army surplus equipment. Each had showers, toilets and iceboxes. They even had piped music and a PA system set up in every one, controlled from the ‘‘front office’’. ‘‘Actually, our house stayed half-built. The cabins were great, but we lived like paupers,’’ John laughed.

The holiday park had ex-army Nissen huts and old buses where people could stay, and there was an outdoor movie projector, a hand-cranked 35mm machine that screened reels of Felix the Cat and other cartoon favourites.

John Cain senior was extraordinarily resourceful, even by the standards of a time that obliged many to be that way. During wartime shortages, he was able to produce his own petrol in the backyard behind his tyre shop from eucalyptus leaves and from oil shale that he dug from somewhere down Lithgow way – until the authorities put a stop to it.

A flood tore through the holiday park in the early 1950s, ruining everything and washing the Catalinas away. Authorities complained that the wrecks were a hazard, and John and some friends had to go and cut them up with axes, selling the aluminium for scrap. One of the big floats from one plane was turned into a canoe for John jnr, and his dad wired up a converted starter motor to a six-volt battery, fitting a propeller so his son could motor around the creek, until the battery went flat.

After the flood, the Cains moved over to Charlestown, shifting the zoo and animals. ‘‘I rode a camel from Stoney Creek to school at Toronto one day. That surprised them,’’ John recalled. But one day somebody poisoned the animals and the zoo days were over.

What became of John Cain senior, visionary and anti-authoritarian? ‘‘Well, he ran for politics once, but that didn’t work out,’’ John said. He ended up at Islington, in another tyre shop, alone and reclusive. John said his father died at the shop in 1986, in a blaze that carried off swathes of family records and memories.

‘‘I hear a lot of stories about my father. A lot of them are total nonsense and I think some day I should set the record straight. The old man did a lot of things, and maybe he didn’t finish a lot of what he started but he was remarkable in his way. ‘‘With a lot of his plans and ideas he was certainly a long way ahead of his time.’’