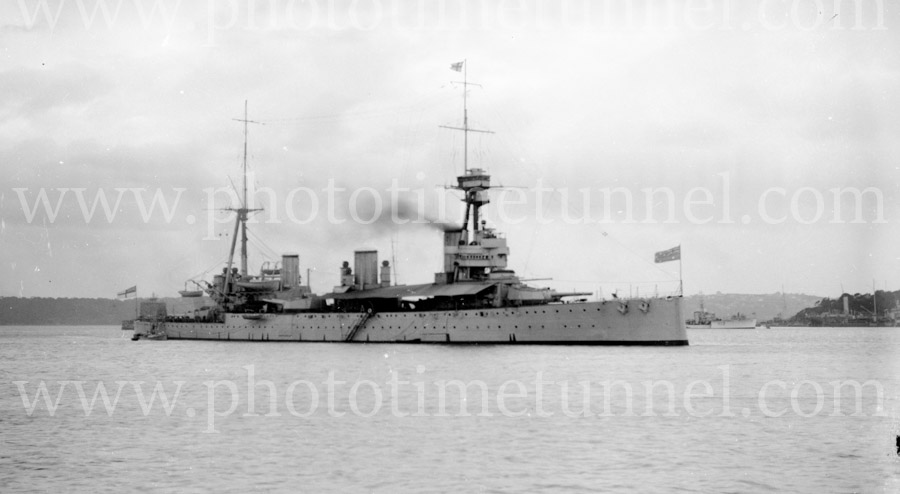 HMAS Australia in Sydney Harbour in 1920

The Indefatigable class battlecruiser HMAS Australia was the Australian Navy’s first flagship, whose arrival in Sydney in October 1913 is popularly regarded as marking the coming of age of the nation’s naval service. In fact, it might be said that the acquisition of the expensive capital ship by Australia was mostly a way of inducing the dominion to contribute to Britain’s naval arms race against Germany, with the knowledge of a war fast approaching.

The ship had been ordered from the British firm John Brown and Company in March 1910, with £2 million budgeted for its construction. It was actually delivered under-budget, and sailed from England to Australia with the new light cruiser Sydney. Its public reception was euphoric, with the press and politicians enthusing over this new expression of Australian power.

When World War I broke out, HMAS Australia was involved in the seizing of Germany’s Pacific colonies and the capture of the German ship Sumatra before the British ordered the Australian flagship to leave its home waters at the end of 1914 to join the British Fleet. On the way north it sank the German supply ship Eleonore Woermann off South America. HMAS Australia did convoy and patrol work for the duration of the war, with its routine broken by two collisions – one with the New Zealand in April 1916 and another with HMS Repulse in November 1917.

Back in Australia the costly-to-run battlecruiser was converted to a gunnery and torpedo drill ship before being paid off into reserve in late 1921. The terms of the postwar Washington Naval Treaty of 1922 required the fighting nations to reduce their naval firepower and HMAS Australia was earmarked for scuttling. Over the next two years the ship was stripped of valuable and useful items. It was decided that the cost of dismantling the ship was too great, so the cheap option of scuttling was chosen, against considerable public protest.

On April 12, 1924, the ship was towed out to sea by tugs, seacocks were opened and a charge detonated at about 2.30pm, sending HMAS Australia to the bottom. In recent years underwater surveys have located the wreck, about 400m below the surface, resting upside down on a gentle slope.