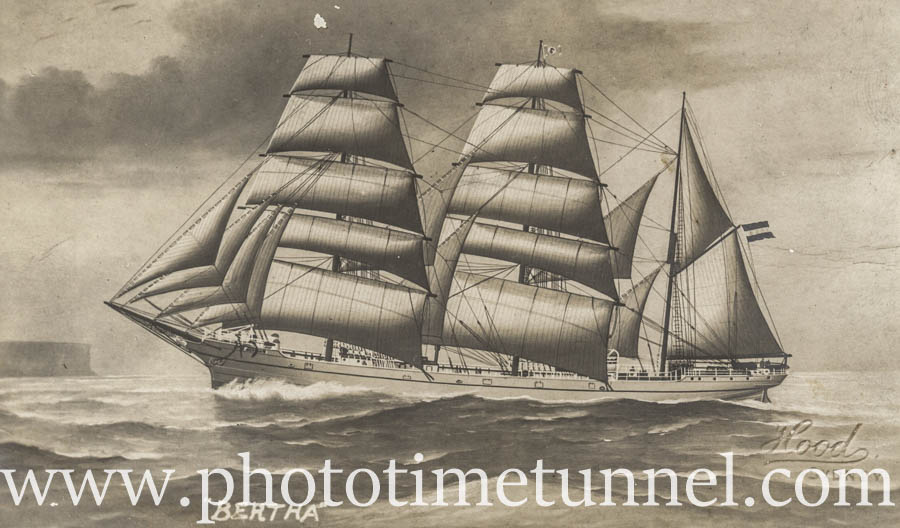 The Bertha in full sail. Postcard by Hood, Sydney.

MAYBE young German sailor Adolf Nordman dreamed of being more than friends with Nellie Shephard, the tailor’s pretty young daughter whom he met in the port of Newcastle, NSW, in 1909. His postcards, written in the years before the outbreak of World War I, hint that way. If so, his hopes were unrequited.

Nellie became the wife of an Australian artillery officer who fought against Adolf’s countrymen in the war, and Adolf’s lovely ship, the Bertha, met a terrible end in the Shetland Islands in 1924, where her figurehead now stands on the shore, looking out to sea, and where the local islanders call her the Wooden Wife, or, the White Wife of Otterswick.

The Bertha had been built in Grangemouth, Scotland, in 1892 for German owner J.H. Soost, and was named for his eldest daughter. Perhaps the figurehead, a stern and bookish lady, was modelled on Bertha Soost.

In 1909 ships came from all over the world to load Newcastle coal, but the loading facilities were notoriously limited, so crews often found themselves with time to spend in the port. Sometimes they got to know local families. When she came to Newcastle in about September, 1909, to load 2500 tons of Caledonian coal for Carrizal, Venezuela, Bertha was carrying some cheery sailors named Adolf Nordmann, Otto Krull and August Hinricks. How the trio came to befriend the family of Hunter Street West tailor J.R. Shephard isn’t clear, but perhaps they bought some clothes, struck up a conversation, got invited to dinner and wound up sharing picnics and boat trips up the river with the tailor and his pretty young daughter, Nellie. We know they became friendly because one of the sailors, young Adolf, sent postcards to the Shephards for a few years until the outbreak of World War I, when cordial relations between Germans and Australians were generally at an end.

Bertha left Newcastle on October 1, 1909, but quickly ran into serious trouble, striking a coastal gale that badly damaged her rigging, knocking down her topmasts and leaving her wallowing in the sea south of Sydney.

The Adelaide Advertiser of October 9, 1909, reported the following:

The German barque Bertha is knocking about off the coast in a dismantled condition, on the look-out for a tug to bring her into port. News of the vessel’s plight was brought to Newcastle today by the barque Conway Castle, the captain of which reported on arrival at Newcastle from Santos that he spoke the Bertha on Thursday morning last 90 miles south of Sydney. Her foretopmast and fore-topgallant mast, and all the gear attached had gone, only the foremast and fore lower yard standing. When sighted there was still a lot of wreckage hanging from aloft. The main and mizzen appeared to be intact. The wind when the Conway Castle signalled the Bertha was west-north-west, and the crippled vessel was standing off the land to the eastward. She was soon lost sight of from the decks of the Conway Castle. At 5 p.m. the same day, however, the Conway Castle got a southerly blow, which brought her to Newcastle, and this favourable slant would be taken advantage of by the captain of the dismasted vessel. Signals were made from the Bertha to the Conway Castle, showing that the dismasted barque was making for Sydney for repairs, and requesting the captain to send tugs to her assistance. Upon the receipt of the news in Sydney to-night the tugs Hero and Champion proceeded to sea to search for the dismasted barque.
The Bertha came to Sydney from Hamburg, and upon discharge of her general cargo proceeded to Newcastle, where she loaded 2,558 tons of Caledonian coal, on behalf of the Caledonian Coal Company, for Carrizal. She sailed from Newcastle on October 1, and doubtless her dismantled condition is the result of the cyclonic storm which swept along the coast on Sunday last.

Adolf sent Nellie a postcard from the Sydney Seamens’ Institute on November 5, showing the crippled ship. “This is a snap-shot from our Bertha. How do you find her? She has pretty well lost of her beauty,” he wrote.

Adolf wrote from Morts Dock, Balmain, where the ship lay whilst under repair, inviting the Shephards to visit. It doesn’t appear they took up the invitation.

A year later he wrote another card to the family of the Hunter Street tailor: “How are you going on, and your dear family? Often I remember the happy hours we spent together and I do wonder when we shall meet again. Those beautiful trips up the Hunter River. Is the parrot still crying ‘Halloh Coockee?’ What about dear Nell, does she remember the jolly hours we spent together, and how is Tom going on? Write soon and often to yours thankfully Adolf Nordmann. PS: Send me some Newcastle newspapers and some stamps for my collection.”

In May 1912 he wrote again, from Heligoland: “Often I remember the happy hours we spent together and I do wonder when we shall meet again. Those beautiful trips up the Hunter River. My dear good Nellie, it’s a long, long, long, long time I have been without news from you. How are you going on dear Nell? Do you still remember the pleasant hours we spent together with your dear family at home as well as abroad on the pretty resorts Raymond Terrace etc. whereto we went by the funny steamer, Guthrey? I am now serving to the king one year until the end of this year in the German navy being now near Heligoland. Next year I shall enter as an officer the Hamburg-American Line from Hamburg. Now dear Nell give my best love to your dear parents and write soon a nice letter to your loving Adolf Nordmann . . . on board SMS Pommern, Kiel, Germany.”

The last postcard that fate has preserved from Adolf to Nellie was posted from Rio de Janeiro in March 1914, shortly before the outbreak of World War I made friendships between Germans and Australians difficult to maintain. “My dearest Nell, I am now on board the Passenger Steamer Konig Friedrich August, Hamburg-American Line, running to Bs Aires & vice versa. I’ll arrive at April 26 again at Buenos Aires (Argentina) so you may write in time thither. I’ll send you my photo with letter next post, hoping to get yours too soon. Send pray some illustrated weeklies and a song booklet. Hoping you and dear parents are enjoying the best of health. Believe me your affectionate, Adolf Nordmann, Officer of the H.A.L. [Hamburg American Line]”

Ellen Shephard (Nellie) kept Adolf’s postcards all her life. It isn’t known whether she ever replied to him, although she probably did. She married Robert Cudden, who went away to fight in World War I and returned in 1917, badly affected by his experiences on the battlefield. The two lived in a house in Parry Street, Newcastle West, and after their deaths their children Tom, Bob and Margaret continued there, unmarried, until they too passed away. The house, named Wara Mooloo, became the centre of several enterprises. Captain Cudden tried to set up a convalescent home and published some short-lived newsletters on health and political matters. Nellie was an enthusiastic amateur artist and sculptor. One of her sculptures, a near life-size wooden image of crucified Christ, could be seen through the front window of the Parry Street house until the last of her children passed away.

I don’t know what became of Adolf Nordman. Perhaps the war swallowed him up, as it did so many young sailors and soldiers. After he and his friends left the Bertha she was sold to Swedish owners in 1912 who renamed the ship Bohus. She traded in northern waters until, in 1924, she was sold back to German owners who planned to use her as a training ship for young cadets in sail. She sailed from Gothenburg for Taltal in ballast under command of Captain Hugo Ferdinad Blume but was wrecked on the trip. The Bohus ran aground on the Otterswick rocks off the island of Yell in the Shetlands group during the night of April 26, 1924. Four young sailors lost their lives in the wreck.

Her wooden figurehead, that once preceded Adolf and his shipmates to Newcastle, now stands on a hill on the island of Yell, overlooking the scene of the disaster. Locals call her the White Wife of Otterswick, and to them she is a beautiful but stark symbol of a tragedy. To me, she’s a symbol of all those pretty springtime dreams, never to be requited, recalled in the later years of all our lives.

An interesting article about the wreck can be found here: https://www.northlinkferries.co.uk/shetland-blog/the-white-wife-of-otterswick/

The runaway plane and a midair collision: a bad month at Bankstown Airport, August 1955