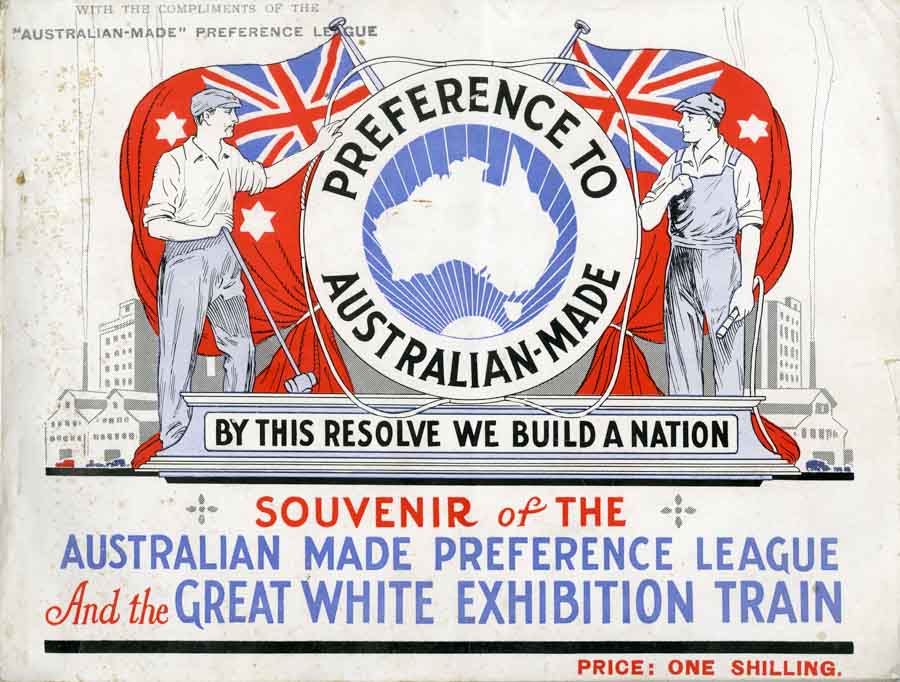 “Buy Australian” movements are nothing new. They’ve been around as long as Australia has had any sort of industry to protect.

But there have seldom been any efforts of the sort as spectacular as the Great White Exhibition Train that made a grand tour of NSW in 1926, designed to encourage people to buy products made in Australia.

The Great White Train – pulling 20 carriages showcasing the best in Australian manufacturing and commerce – was the most visible enterprise of a group of businessmen and patriots who called themselves the “Australian Made Preference League”.

The league’s founder was Fred Burley, whose name in Frenchified form was attached to the firm of Berlei, which made and marketed women’s underwear. (Perhaps ironically, Fred found that Australian women found a French-sounding lingerie brand-name more appealing than plain “Burley”.

Slumping towards The Great Depression

World War 1 had isolated Australia from the reliable supply of many overseas products, giving the country an opportunity to develop its own secondary industries. But when the war ended these industries began to struggle as foreign factories began to send their goods back to Australia, often at cut-throat prices as the world economy began to slump towards the Great Depression.

Berlei and his colleagues complained that, by not supporting their own domestic industries, Australians were risking the country’s long-term prosperity. “Only by giving a continuous preference will we provide the stimulus that will multiply employment, prosperity, population and national security,” wrote one of the league’s directors.

The Great White Train was conceived as a travelling advertisement for what Australian industry could do. It had 15 exhibition coaches, two sleeper cars for its full-time staff, a dining car, kitchen car and a brake van.

The train had its own petrol generators to power its exhibits and it had a radio transmitter set (made by AWA in Sydney) from which it beamed broadcasts on its own station, 2XT, about the league’s aims and activities.

Powerful searchlights, mounted on the train, swept the skies at night, advertising the presence of the display. It showed films every night of its tours, in which “the intricate and highly technical processes of manufacture are made plain to the simplest minds.”

It is probably fair to say that the patronage of the NSW Government, under Labor Premier Jack Lang, made the project possible by tipping in £5000.

The train began its first six-month tour from Sydney on November 11, 1926 and travelled to Gosford, Newcastle, West Maitland, Cessnock, Singleton, Muswellbrook, Scone, Murrurundi and 50 other towns. Whenever it stopped, Buy Australian propaganda was distributed, speeches were made and leading citizens from each centre were invited to lavish dinners aboard the train. A special lecturer went out to schools to explain the thinking behind the exercise.

The companies represented among the train’s lavish and artistic displays ranged from multinationals with Australian manufacturing operations, like Nestle and Anglo-Swiss Condensed Milk Co, to small local enterprises like the Gosford cordial firm Jusfrute.

In every town visited an Australian Made Preference Shopping Week was organised, with the league awarding prizes to the best shop window displays. In Newcastle, stores like Sorbys and Winns dressed up their windows with Australian-made goods to mark the occasion.

Newcastle Lord Mayor Morris Light – the owner of a prominent retail chain – opened the exhibition in his city.

Sadly, though the Great White Train was a fine idea and very well executed, the timing was not so good. Within a few years the Great Depression had set in and the widespread national prosperity that the Buy Australian Preference League dreamed of was postponed for decades.

Some of the principles of the league still resonate today. Its “ten points for good Australians” are typical of its propaganda:

Presumably the league’s directors would be fascinated to see Australia in the face of globalisation. It’s hard to imagine what they’d say about the export of jobs to low-wage countries and the relentless closures of manufacturing plants, although one assumes they wouldn’t be impressed.

Director W.R. Bagnall wrote: “Unfortunately the parliaments of the Commonwealth are too heavily weighed down with the deadweight of party strife to be able to grapple with the task. Each year that passes sees them more handicapped in that respect.” “The mass of the people has only vague intuitions on national problems. It is mostly concerned about everyday hand-to-mouth problems with the result that political parties, to maintain their popularity, become politically waterlogged as useful instruments on vital questions.”

Some things, it seems, never change.

2020 has been bad for democracy, but look what might be coming next.