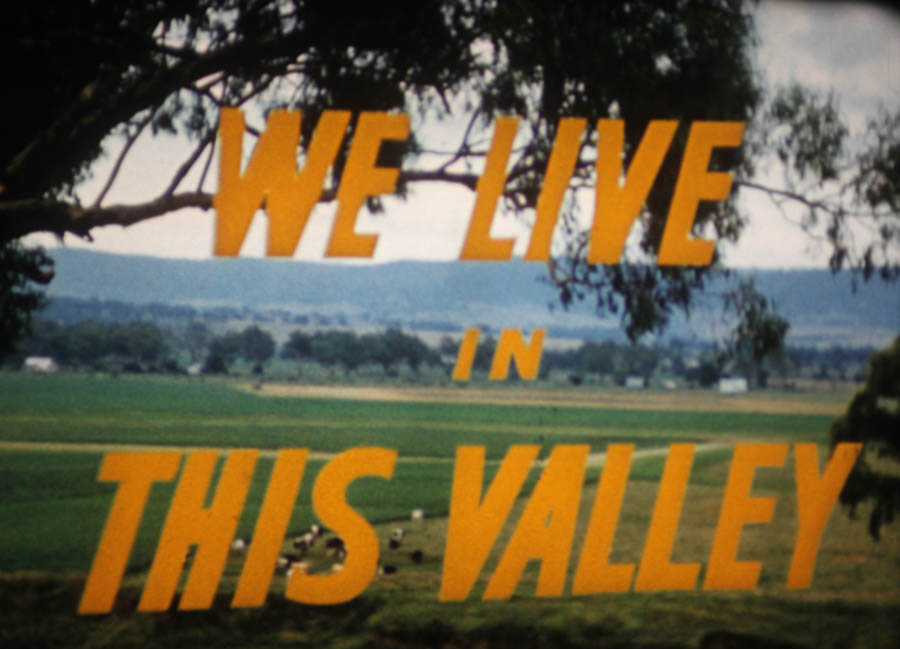 In 1961, when dairying was one of the Hunter Valley’s major industries and it seemed that the valley’s future would be as a food-bowl to the nation and perhaps the world, the Hunter Valley Co-operative Dairy Company Ltd decided it wanted to make a film about the wonderfully fertile and productive valley it called home. The idea came from company general manager Jack Scarr, who had attended a dairy congress overseas and was shocked at the lack of knowledge about Australia in general, and the Hunter Valley in particular. It was planned to use the film to market the Valley to the world.

Well-known photographer and film-maker, Douglass Baglin, was hired to produce the hour-long documentary. The result, We Live in this Valley, took two years to film, and appeared on television screens in 1963. The film, narrated by ABC identity James Dibble, surveyed the industries of the valley, with a particular focus on primary production, and emphasized the importance of rivers and water resources. It traced the Hunter River from its source in the Barrington Tops to Newcastle Harbour and presented a kaleidoscope of Hunter life, offering an optimistic view of a future in which farming, mining and other industries would combine to make a region of enviable prosperity and diversity.

The documentary makes fascinating viewing decades later. Many of the industries depicted have closed and what remains of the once proudly local dairy giant has been taken over by foreign interests.

Mining has displaced many other activities in the valley and it is not clear what will remain when the valley’s coal resources are eventually exhausted and the final voids of the giant open-cuts are left behind.

We learned of the existence of the documentary in 2012 when Pete Smith, of Maitland, contacted us to talk about photographic projects. Pete – who used to work for the dairy company – gave us a collection of negatives from a “clean-up” at the company’s Hexham headquarters some years ago. Pete told us that most of the pictures were taken by the late Mr Baglin in the course of the creation of We Live in this Valley. We mentioned that we’d be interested in seeing the film, and Pete departed with a thoughtful look on his face.

A fortnight later he was back, with a can containing more than 500 metres of 16mm film. We had this film digitised by Sydney firm DVD Infinity, and obtained permission from Mr Baglin’s niece, Ms Yvonne Austin, to use the film and the still photographs. Once the film was digitized, we had 10,000 copies stamped (along with a second documentary, Story of a City) and included them with our third book, Changing Places.

Pete then donated the film to the University of Newcastle, which has made the documentary available on-line. You can watch it here.

Our book, Changing Places, contains a DVD with two vintage documentaries including We Live in This Valley. See information about the book here.

My heart tells me we should change the date