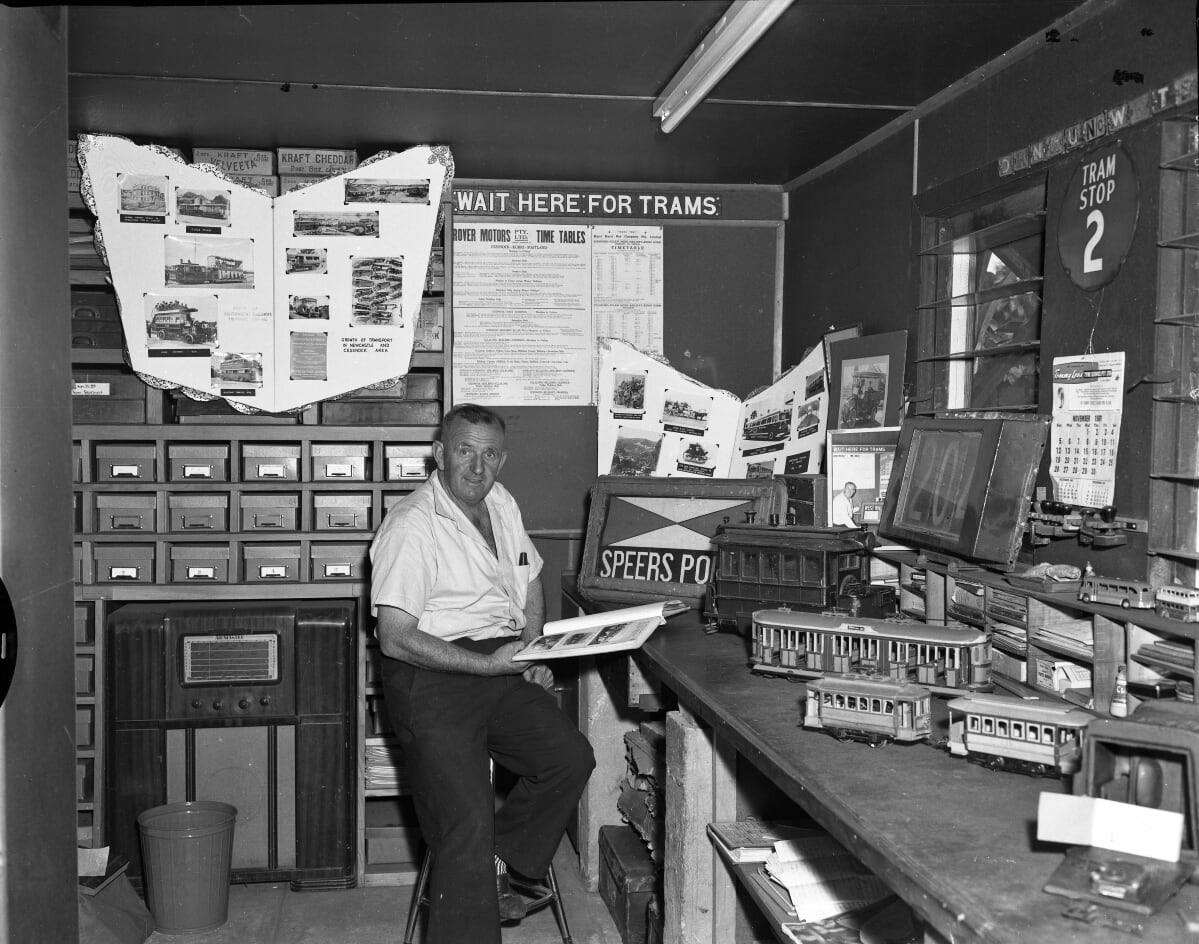 Ken Magor was a passionate Newcastle-based collector of transport and fire brigade memorabilia who, at the time of his death in 1993, had amassed about 250,000 photographic negatives, in addition to a huge collection of other items.

Having found it impossible to transfer the collection to Newcastle Regional Museum, Ken and his son Barry did their best to disperse it to smaller museums with special interests. Many photographs and negatives went to a bus museum in Sydney, and much of the fire brigade material was accepted by the Museum of Fire in Penrith.

After Ken’s death Barry sold much of the remaining material to Greg Ray – at that time a journalist at The Newcastle Herald with an interest in local history. Some other items from the same collection also came to Greg and his wife Sylvia some time later from Ken’s step-daughter Betty Mead and her husband Norman.

The portion of the Ken Magor collection now in the hands of Greg and Sylvia Ray is really comprised of a number of sub-collections.

One of these, which we have called the “Missing Years” collection, turned out to be negatives which had at some time in the 1960s or 1970s been discarded by the library of The Newcastle Herald. Ken Magor was a very frequent visitor to the Herald office, where he would scrounge “spare” negatives illustrating topics of interest to him. He also often managed to persuade the newspaper’s photographers to copy old photographs that he borrowed from the family collections of various people who knew of his collecting passion.

It appears that, when the newspaper library was obliged to “downsize”, many old negatives were discarded. Ken Magor was on the spot to eagerly add these choice items to his personal transport collection.

The non-transport “rump” of this mixed bag of about 4000 negatives was placed in some old shoe-boxes and largely ignored for decades until Ken passed away and they were sold.

The Missing Years collection mainly encompasses the 1930s to the early 1950s, and covers the Great Depression and World War II – periods of time that had been poorly represented in the photographic record of Newcastle until this collection unexpectedly re-emerged from obscurity.

The portion of the ex-newspaper negatives that depicted transport items was separated and placed with the second sub-collection, an indexed collection of negatives, prints and postcards depicting transport-related topics. This collection includes many photographs taken by Ken Magor himself, as well as items he scrounged, swapped and otherwise acquired from innumerable sources over his years of collecting. Ken painstakingly numbered these items and recorded their details in a series of school exercise books.

The fourth sub-collection consists mostly of ex-newspaper negatives – almost certainly from the same source as the Missing Years collection – from the 1960s and 1970s.

This material is just a portion of the enormous aggregation of material Ken Magor gathered during his lifetime. He was a collector on an extraordinary scale, and his efforts to preserve items that were otherwise likely to have been discarded or destroyed have proven to be of great value, especially to Newcastle and the Hunter Region.

Who was Ken Magor?

His lifelong love affair with transport started with his first job at a garage in Broken Hill, earning 10 shillings a week. Next, in 1928 he became a bus boy (conductor) earning 30 shillings a week on the Cock Robin, one of the hard-tyred buses that served the town in those days.

His dream was to join the fire brigade, but the books were closed in to the Great Depression and no new staff were hired until 1938.

Ken left the buses in 1936 and went to work in Broken Hill’s Zinc Corporation mine, leaving there to work as a warder at the town’s jail. On one occasion when he had to escort a prisoner to Orange, he kept going to Sydney and made a personal appeal to the president of the Board of Fire Commissioners. He was given the opportunity to become a temporary fourth class fireman, and from this starting point he built a career in the NSW Fire Brigade.

He transferred to the Newcastle suburb of Cooks Hill in 1941, beginning his long association with the city. In later years he worked mostly from Waratah and Tighes Hill stations.

He retired in 1972, aged 60, after 33 years’ service, during which he received the Queens Medal for exemplary fire service.

His great passion was collecting, and he travelled far and wide in pursuit of elusive items for his extensive collections.

Greg and Sylvia Ray and the Ken Magor Collection

Greg Ray’s purchase in 2010 of 20 kilograms of negatives from Ken Magor’s son Barry was a life-changing event for the newspaper journalist and his wife Sylvia.

At the time of the purchase neither Greg nor Sylvia was especially interested in photographs, but Greg had a “gut feeling” that he ought to buy these shoeboxes of negatives.

After some weeks of examining them, it suddenly dawned on him that he had seen some of the images before – in old copies of The Newcastle Herald that he had consulted for various historical stories.

The truth quickly became apparent: this was part of the former photographic archive of the Herald and Sun newspapers, discarded years before, apparently because of storage difficulties.

After consulting with then Herald editor Roger Brock, Greg and Sylvia partnered with the newspaper to produce a book – Newcastle, the Missing Years.

“But the yawning gap was the 1930s and 1940s, a time when the Depression and war put photography out of the reach of many people in the Hunter area. Very few good photos from that era were readily available, so the sudden reappearance of high-quality pictures by professional photographers on good medium-format film-stock was wonderful”.

The book sold quickly and has been reprinted seven times since its first publication in 2010.

Greg and Sylvia followed up with Recovered Memories, Newcastle and the Hunter Region, and then in quick succession with Changing Places, Destination Newcastle, Newcastle Slideshow, Images on Glass, The Way We Worked, The Hunter Region in The Great War and Newcastle in the 1960s.

Newcastle in the 1960s was assembled using photographs by Ron and Liz Morrison, who operated their own press agency in the city during that period. In 2018 Greg and Sylvia purchased the Morrisons’ remaining photographic archive, with the Morrisons generously transferring copyright along with the physical negatives and prints.

The 2018 book, Travelling Through Time, is a collection of photographs spanning the era of sailing ships, through steam and electric trams, to trains and buses up to the 1980s. Again, the photos are mostly drawn from the Ken Magor collection, but also included are many rarities acquired from a variety of other sources – including spectacular photos rescued from rubbish bins!

The nudes that started our publishing career