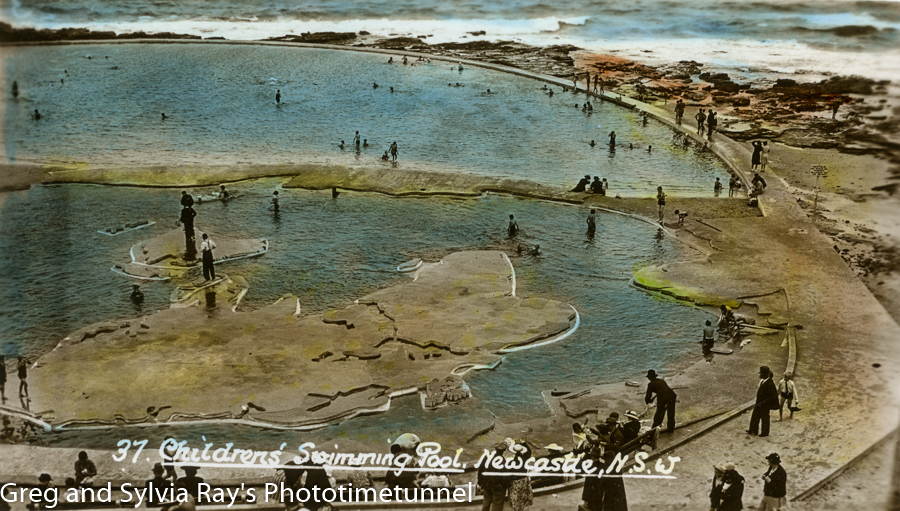 So many myths surround Newcastle’s lost and lamented Young Mariners’ Pool, with its legendary concrete map of the world. Many people believe the lost continents still lie beneath the sand, and that determined digging will reveal them in their former glory. Alas, the fact is that only some fragments of the map sections around the edge of the pool remain to be exposed from time to time.

Most of the concrete map was broken up by Newcastle City Council in the 1960s and the pieces were dumped off Nobbys breakwater to supplement the always-eroding wave barrier. The reason was that the pool had suffered some storm-damage, and also that it constantly filled with sand and needed excavation.

The pool was opened on Saturday, September 25, 1937, by the Lord Mayor, Alderman Fenton, as part of a £160,000 civic-improvement program that included upgrading the road through King Edward Park and installation of tiered concrete seating in the north-east corner of Newcastle Baths.
The pool was said to be the idea of city engineer, L. J. Price, who was inspired by watching the Lord Mayor’s son trying to sail a model boat in a rock pool. A 1937 report in The Newcastle Sun noted that “it was the juvenile yachtsman’s difficulties that gave the engineer the idea of constructing a pool”.
“The scheme for embellishing the expanse of water with the countries of the world, thus creating a ‘world in miniature’, around which children will be able to plan cruises for their model yachts, was worked out later.”

The geography master at Newcastle Boys’ High School, Edgar Ford, was consultant on the layout of the map, and a Mr Johnson of the city architect’s department took on the project as a personal hobby.
“Retired sea captains and seamen who have sailed the seven seas have sat on the slopes above for hours and watched the ‘world’ taking shape below them,” The Sun reported.
“When it is complete the pool promises to be one of the big attractions of the beach. Between its outer edge and the sea will be a lagoon in which older children may sail their tin canoes, and above it to the north is being constructed an elevated grassed area on which family parties may watch the children at play.”
The Young Mariners’ Pool was about 20 metres wide, elliptical, and its continents and islands jutted about 20 centimetres above the water. In common with atlases of the time, British Commonwealth countries were coloured red while the rest of the world was painted green.

The second stage of the development, the Canoe Pool, was created by the construction of a large, arc-shaped seawall that extended the elliptical wading pool into a great circle atop the rocky platform. The depth of water in the pool was controlled by sluice gates.
Old newspaper clippings suggest the Canoe Pool was being built in 1939 but it does not appear to have been fully completed until 1941 or later, with much debate in council over whether it was worth building at all.
From the start, both pools were subject to being filled up with sand and this was a major headache and expense for the council. In early 1941 the council actually found the pool a handy source of sand for covering garbage dumps, filling parks and top dressing lawns and gardens.

So persistent was the sand problem that it seems the pools were often more or less filled in, but during their heyday in the late 1930s through the 1940s the area remained a paradise for children.
One visitor, later to be famous, was America’s Cup legend Ben Lexcen.
Lexcen’s real name was Bob Miller, and as a youngster he indulged his lifelong passion for sailing by mucking about with model boats in the Young Mariners’ Pool.
Ben Lexcen nearly had his America’s Cup patron, Alan Bond, talked into paying for a reconstruction of the long-lost world map during the 1980s. Lexcen’s death and Bond’s bankruptcy and descent into ignominy put paid to such talk.
The map of the world was damaged by storms in the 1960s and the continents were broken up and dumped off Nobbys breakwater, opposite the searchlight bunker, and could be seen there for some time until they faded and weathered beyond recognition.

The story of the Young Mariners Pool is told in our book, Newcastle, The Missing Years.