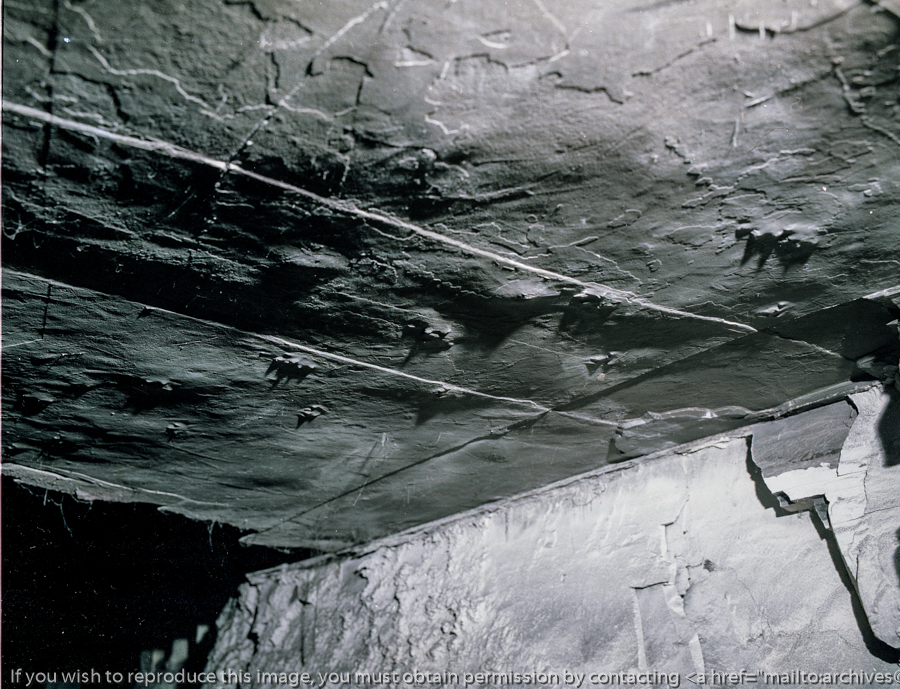 Lizard tracks on the ceiling of Wallarah Colliery, May 1979. Photo by Brian R. Andrews

MILLIONS of years ago, apparently, a large lizard or similar creature was taking a walk on some soft ground. Its feet sank into the mud, and it backed away. The ground hardened, preserving the tracks, which were later filled in with a different type of mud. The ground eventually turned into rock, and other layers formed on top, pressing those layers and the tracks of the creature deep below the surface of the earth.

In 1979, miners working the coal seam in Wallarah Colliery, deep beneath Catherine Hill Bay, south of Newcastle, looked up and saw the reverse impressions of the long-ago creature’s feet in the ceiling of the mine. The coal had been extracted, and the rock that had filled the creature’s footprints remained as the mine roof.

The miners reported their discovery, and Brian R. Andrews – who had begun to make a speciality of the tricky job of underground photography – was called in to record the find as best he could.

According to Brian: ” A platform was erected so that I could get up close to the footprints as the seam was about ten feet thick at that location. Due to the colour of the strata along with the height of the footprints it was difficult to capture on film what the eye could actually see. However, I managed to get a reasonable record of the foot prints, the best possible in the circumstances”

“It was intended to remove the section of roof containing the footprints and give it to a museum in Sydney. A number of holes were drilled around the section for shooting out. Sadly the deputy who was given the job of removing the section considered the amount of powder he was told to use was not sufficient and used extra resulting in the footprints being blown to pieces. At least photographs of the footprints exist today.”

According to former miner Tom Cowling, it was he who actually first spotted the tracks on the mine ceiling.

“I was leading hand fitter at that point in time,” Tom said. “We were doing a belt retraction, we had a breakdown and were reclining on the belt waiting for repairs to be completed. This occurred in July 1979. The tracks had been exposed for many years before I noticed them. As I remember each track was only about 50mm and there were no drag marks from a tail. When they were examined by geologists from Newcastle University they thought the tracks belonged to an early amphibian. I was studying at Newcastle Uni at the time and this helped me to notice the irregularity in the roof. They were in a high roof area and fairly indistinct: it was only the shadow from my light that highlighted them.”

The photos have been placed online by the University of Newcastle and may be viewed at this link:

To read more about Brian and the books he publishes, click the link below: