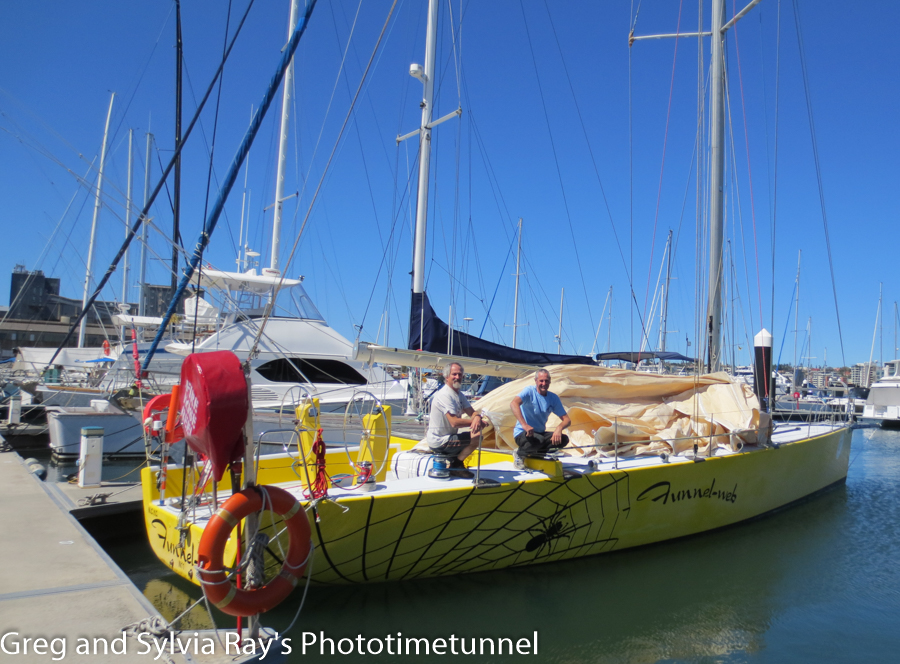 In September 2013, while working at The Newcastle Herald in NSW, Australia, I read an item in our paper about a yachtsman visiting Newcastle Harbour. The sailor, Ivan Macfadyen, noted in the brief article his shock and surprise at the state of the North Pacific Ocean after a recent voyage.

The article grabbed my attention, so I found Ivan’s contact details and asked him if I could do a follow-up interview. He accepted, and told me a little more about the experience that led to his comments. The reported remarks had followed his second Sydney-to-Osaka yacht race – the first having been a decade before. The apparent deterioration in the health of the ocean had affected Ivan deeply, and he wanted to tell the world what he had seen.

We arranged to meet on his yacht, Funnel-web, in Newcastle Harbour. On the day of the interview I did something I had never done before in 30 years of newspaper reporting; I called at my son’s high school and took him out of class to come with me. Jerry was (like his two siblings Lily and Oliver) deeply concerned about the environment and the welfare of non-human species of life. I had a gut feeling that the interview I was to do on this day might be more important than any lesson Jerry was likely to be learning in school.

When we turned up at the boat we were met by Ivan and his brother Glenn, who had accompanied Ivan on part of the voyage and added his own voice to Ivan’s concerns. Jerry and I listened sombrely to the story the two sailors told. As the interview progressed I was more certain than ever that the story was very important, but I felt unsure about my ability to do it justice.

As we drove away I told Jerry that the capacity of a regional newspaper in a small centre like Newcastle to provide the reach this story deserved was very limited. Also, the lack of good photographs seemed a critical problem. Ivan gave me a few photos on a flash-drive, but they went nowhere near illustrating the things he described to us.

“I’ll do the best job I can,” I said to Jerry (and to myself). “Without good photos or video the words are going to have to do all the work”. And since everybody I worked with seemed of the opinion that stories without photos or video were a dead loss in this day and age, I felt pessimistic.

Sitting at my computer I hammered out the words , trying to honestly capture the sense of loss, grief and horror that Ivan had described feeling during his long voyage across the post-Fukushima North Pacific. Contrary to the accepted rules of newspaper writing, I left Ivan’s most devastating quote to the tail end of the story: “The ocean is broken!” He had delivered those words with an anguished shake of his head, and they echoed in my mind long after the interview was over.

The story was easily good enough to be the cover story for the paper’s weekend magazine, and that’s where it was placed. But the critical factor proved to be a decision by sub-editor Louise Fraser, who was at that time responsible for the paper’s online content, to push the story on The Newcastle Herald’s Facebook page.

I’d never had a story go viral before, and the experience was amazing. After it went online, The Ocean is Broken struck a chord with readers all the over the world. We watched it being shared all over the web. Responses flooded in from all over the world – both positive and negative.

Here are some of the responses:

A week after the article was published, The Herald reported that: “The story smashed Fairfax Regional Media records, registering 620,000 unique readers on the Herald site by Tuesday afternoon. It appeared on the front page of Reddit on Monday, was trending in Melbourne early Monday afternoon, and was re-tweeted by, among others, Jack Dorsey, the founder and chief executive of Twitter, Jane Caro and Penny Wong. According to Google Analytics, 44.57per cent of readers came from the US, 13.31per cent were from Australia, 10.92per cent from Canada and 8.64per cent from the UK.”

The article resulted in interviews with global media for both Ivan and myself, and many articles and artistic responses were published in its wake.

Ivan and I talked about writing a book together, but it didn’t eventuate. Not yet anyway. But I was contacted by a UK-based publisher of school textbooks, asking for permission to use the article in one of its publications. According to the author of the proposed book, Emma Scott-Stevens: “The study guide focuses on the GCSE English Language course in England. For this specific paper students have to compare two different non-fiction articles, from different time periods, in a number of ways. I would like to use the first page and a half of your article as a practice paper. The second text would be an extract from ‘South’ by Ernest Shackleton. Your article would therefore be published alongside ‘South’ and would be accompanied by four questions in  the style of the exam paper and some model answers”.

I wonder how that worked out?

For me, perhaps the most gratifying aspect of the whole episode was talking to my son Jerry about the phenomenon, and considering how the article had actually succeeded in achieving exactly what we had hoped for, regardless of its humble origins. And all without compelling photos or video: all on the strength of words.

I hope it contributed a little to awareness of the destruction we are wreaking on our oceans, though I see little evidence of any major improvement.

As for Ivan, he’s more committed than ever to fighting for the environment and, in between campaigning on various issues, he operates an outdoor adventure and recreation business in the Hunter Region of NSW.