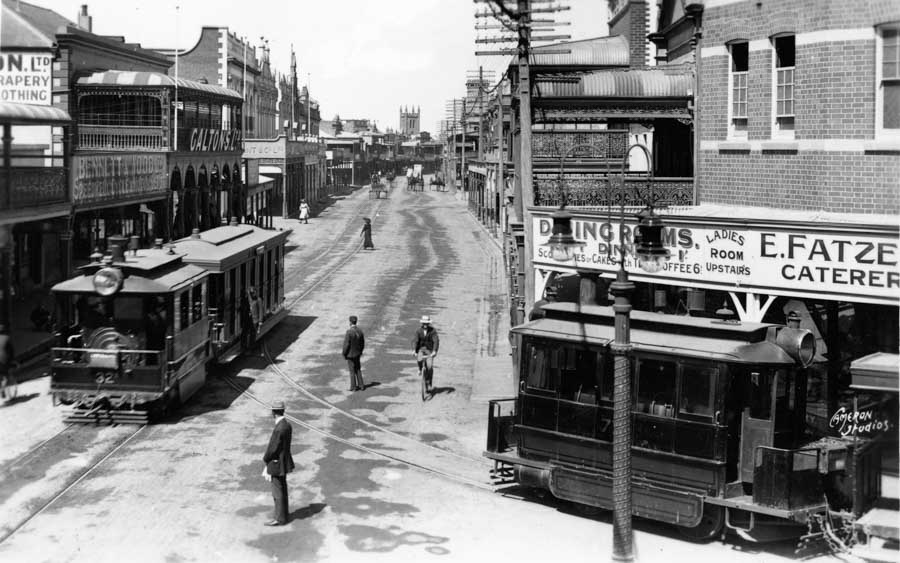 The steam trams of Maitland are fast vanishing from memory, but at one time there were high hopes that a tramway system might link Maitland, Kurri Kurri, Cessnock, Homeville and Rutherford. The government of the time, however, didn’t think the idea made economic sense, and nor did it want to invest in electric trams for Maitland, offering reconditioned ex-Sydney steam trams instead. The limited routes helped make the service unviable, of course, and competition from private buses eventually killed it. The following article was written by transport enthusiast Ken Magor.

From The Newcastle Morning Herald, February 7, 1959, by transport enthusiast the late Ken Magor

On February 8, 1909 the populations of East and West Maitland turned out in force to witness an event of great importance to both townships; the opening of the east-west steam tramway.

It was a great day for the district. The route, which then ran from Victoria Street, East Maitland, to Hannan-street, West Maitland, was bright with flags and the finery of fashion-conscious ladies. All vantage points were crowded, and thousands lined the footpaths.

The opening ceremony was performed by the Member for Maitland Mr John Gillies at the corner of Lawes and Victoria Streets where a big crowd had gathered.

After Mr Gillies had blown a gold whistle and cut a ribbon held by the Mayors of East and West Maitland (Mr J.F.H. Walker and Major Cracknell), the first steam tram (motor 80A), pulling a trail car, got under way.

The trail car was packed with officials who found it difficult to contain their enthusiasm. The tram whistle blew constantly, and the excited crowd threatened to swamp the carriageway. But the 22-minute journey was made without incident.

The opening of the steam tramway service, which operated for 17 years, followed years of agitation by a group of civic-minded Maitland citizens for improvements in district transport. While the townships and the surrounding areas were being served by horse coaches and cabs, a more efficient form of transport was in the minds of these people, and in 1901 a Tramway Act was drawn up to enable the boroughs of East and West Maitland to construct and maintain an electric tramway connecting the two centres. The electric tramway never came into being, but the idea served to arouse public interest in improved transport between the two towns, and in 1907 an Act was passed authorising the construction of the steam tramway. The Minister for Works (Mr. Charles A. Lee) turned the first sod on July 19 of that year. The successful tenderer for the line construction work was Mr. George Champion, whose price was £11,056. However, the final cost was estimated at more than £24,000.

The tram rails were laid to the standard gauge of 4ft 8 1/2 inches, and were of the 60lb girder type. A single line was laid with loops in Newcastle Road, East Maitland, High Street Railway Station and Bulwer Street, so that trams could pass when several were operating. On May 10, 1909, the tram route was extended from Hannan Street to Campbells Hill, increasing the length of the route to four miles five chains, and on October 10, 1910, the line was extended from High Street along Church Street to West Maitland Railway Station, a distance of 37 chains.

Rails in the form of a triangle were placed at the corner of Church and High Streets for the West Maitland Railway Station service – known as the shuttle service. It was also used for shunting trams at peak periods and for breakdowns.

There were three sections. The West Maitland service consisted of one section and stopped at Charles, Bourke, Bulwer, Church, Banfield and Olive Streets, and at West Maitland Railway Station. Running time from the Victoria Street depot to the Campbells Hill terminus was 25 minutes.The fare was originally a penny a section, but in 1914 this was increased to twopence for the first section and one penny each other section, while Sunday travellers were charged an extra penny a section.

Travelling west in Newcastle Road, the trams passed through open country under cultivation. Newcastle loop was reached soon after crossing Wallis Creek Bridge, and a short distance farther on the line turned into High Street, crossing the railway level at the eastern end of High Street Railway Station. An overhead bridge was built following the quadruplication of the railway lines in 1915, and the tramway was carried over the railway by this means.

The tram shed at Victoria street was built to house four tram motors and eight trail cars. All painting and rolling stock repairs were carried out there, and a coal stage and water column were provided. The shed is still in existence, and is to be found in the Kurri Kurri area where it is being used as a stable and store shed. [True in 1959, but status unknown in 2020. GR.]

The New South Wales Government tried out various types of tram motors on systems throughout the State. But Maitland saw only the standard Baldwin type which had a working steam pressure of 140lb to the square inch. In summer and at peak periods, two to four trail cars would be attached to each motor. The “dogbox” or “toast-rack” type of carriage was favoured by schoolboys who found them ideal for fare evasion.

Not a financial success

The tramway service was not a financial success, and as more and more motor-cars appeared on the roads the passenger traffic gradually fell off. It was closed on December 31, 1926. Just after 11pm on that New Year’s Eve the last official tram, carrying an enthusiastic crowd and driven by driver “Rube” Digby, made the last journey along High Street. “Rube” blew a cock-a-doodle-doo on the motor’s whistle and a procession of cars followed with their horns blaring. Near the High Street overhead bridge detonators were placed on the rails, causing minor explosions.

Following the closure, the rolling stock was sent to Newcastle where it was placed in service, or sold and broken up. Work started on the removal of the rails in 1927.

It is interesting to note that a steam tram goods and passenger service operated between East Maitland Railway Station and Morpeth before the re-introduction of the steam train service in 1915.

Postcards from the Past, by Greg and Sylvia Ray