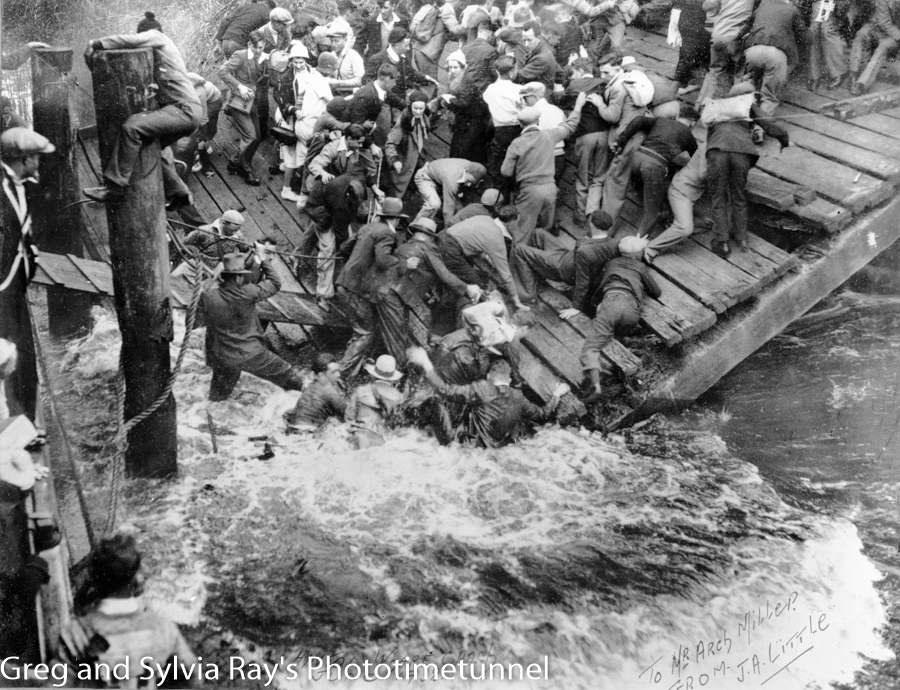 IT was a photograph that should not have been possible, considering the cumbersome glass-plate camera Jack Little was using.

Not only that, the assignment the veteran Sydney and Newcastle Sun photographer had been sent to cover on August 14, 1932 was the epitome of boring. And yet, by pure chance, Little took a photo that day that remains a wonder of news photography.

Little, who was working at the Newcastle Sun on secondment from the Sydney Sun, had been sent by his editors to cover the annual staff picnic of local department store, The Bargain Arcade. The store had hired an old Manly ferry, the Kurnell, to take the staff from Newcastle Harbour up to Hinton, on the Paterson River, for an overland hike to Seaham, on the Williams River.

“On weekends a couple of old ex-Sydney ferries worked the picnic trade, taking groups of employees from various shops and factories – and their families – on excursions up-river. They could only do about seven or eight knots, and on board they had music, ice cream, ginger beer, lemonade and boiled lollies.”

“As they started across the harbour it seemed they were headed out to sea, and the swell used to hit them and make everybody seasick before they turned back upstream,” Doug said.

“At the end of a picnic all the children who’d started out in the morning in their Sunday best would be a mess. Dirty, grimy, full of lollies and ice cream, happy and tired.”

A link to a program of a typical outing on the Kurnell in 1930 can be found here.

Not surprisingly Jack Little didn’t want the Bargain Arcades picnic job. It was a Sunday, and it was a dull assignment. But perhaps the Bargain Arcade was a good advertiser? At any rate, the expedition of 300 hikers set off up river with Little aboard to take photos for the press.

When they arrived at Hinton, it seems that the hikers were eager to get ashore, and many of them climbed down onto the elderly timber wharf that jutted into the river. Little, who was planning to stay on the ferry rather than join the hike, took a first photo of the hikers on the wharf from his spot at the rails of the boat, then prepared to take a second shot.

Interviewed years later for People magazine (September 10, 1954), Little recalled the incident: “When I was pulling the plate across I heard a crash,” he said. “I looked up to see the whole wharf falling towards me, spilling people off the sides and catapulting others into the water. Thanking my lucky stars that the wharf had fallen my way, I shot the scene. It was only after I was sure of that that I started to worry about how those in the water were getting on. Fortunately no-one was injured. Then I could hardly wait to get back to Newcastle to develop the picture,” he told People.

Perhaps surprisingly, it seems the hike went ahead as planned, at least for some of the hardy group. Hinton resident John Coombs said in 2018 that it was his father, Greville Coombs, and uncle Eric who were in charge of the “boat-hike” on the day of the wharf collapse. These hikes generally involved the hikers being dropped off at Hinton, having a picnic and then hiking about 10km to Seaham. The boat would by then have worked its way around to Seaham to collect them and take them back to Newcastle.

According to John, his Uncle Eric is clearly visible in the photo. He is said to be the man in the hat and waterlogged suit with his back to the camera near the gangway in the bottom left of the picture, holding onto a cable. John also says he can see his father’s white sandshoes somewhere in the top of the photo.

“Dad warned the people on the boat that the wharf wasn’t as strong as it should be,” John said. “Uncle Eric got a cut leg from the collapse and he came home and got his mum to put kerosene on it to stop the bleeding.”

More excitement awaited at Newcastle Harbour. A woman slipped and injured her head. An ambulance was called to take her home. Her injuries were not severe.

Interestingly, the photo was used on the back page of the Sun and not at all in The Newcastle Herald. Over the years the extreme rarity of the shot made it tempting for editors all over the world to use it, often claiming it had been taken in different countries and at different times. Even in the Hunter area, over the years, the dates and locations have been bewilderingly misquoted until photographer Ron Morrison took the trouble to publish a paper correcting the mounting errors.

Premonition of disaster: the Meeinderry sinking

Woodlands and Ellimatta homes for boys and girls in the 1940s