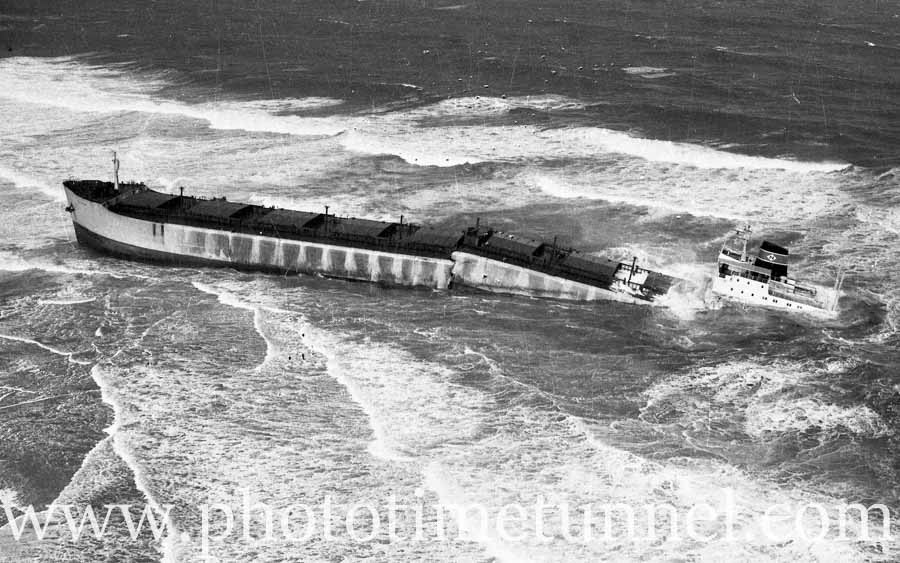 Aerial view of the Sygna aground in May 1974.

Long after the storm had gone and the most of the painstaking cleanup was over, the question of what to do with the giant steel hulk lying broken and leaking oil on Stockton Beach remained. The man who won the right to salvage the ship (nobody else wanted the job) was an incredible character named Kintoku Yamada, of Japan. Apparently, Mr Yamada reckoned he had a debt of honour to pay to an Aussie ex-serviceman named “Harry”.

A teenage survivor of World War II, Yamada had lost his father at the end of the war and he had been seriously weakened by recurrent bouts of tuberculosis. All his life he remembered the kindness of Corporal Harry, a member of the allied occupation force, who gave him $100 and urged him to get an education. Taking Harry’s advice, Yamada studied economics, set up a salvage business and made himself a reasonable fortune. He came to Australia a number of times to try to find Harry, but when he finally discovered the man’s identity he learned that Harry had died five years before and was buried in country Victoria. While in Australia on the Sygna job, Yamada did manage to renew an old friendship with another Australian member of the former occupations force, Guy Carter, of Tumut. A captain during the occupation, Mr Carter remembered Yamada by his nickname – “Kelly” – and recalled how he had applied for work with the Australians on the basis of his excellent English. He was employed by the Australians as a librarian.

At any rate, if Yamada owed any sort of debt to Australians, he paid it back with interest on the Sygna job.

Yamada’s plan was to float the Sygna off the beach in two sections and tow them back to a Japanese shipyard to be rejoined and turned back into a useable ship. It was a good plan and if it had worked he’d have made money. But fate was against him from the start.

Standing just 1.5m tall, the feisty, jocular Yamada spoke fluent English and drank Aussie beer. The first thing he did on the Sygna when he arrived in August 1974 was to place a bottle of sake (Japanese rice wine) on a mast on the ship as a sort of good luck charm. It didn’t work. Yamada knew time was his enemy and he and his 23-man Japanese team of divers and engineers worked flat-out, around the clock, on the Sygna job. They never walked if they could run and they never slept unless they had to.

They were acutely aware that the longer the ship stayed stuck on the beach, the greater the damage to its steel plates and the smaller the chance of Yamada’s gamble paying off. He knew immediately that Australian workers would never put in the same effort that he and his team were prepared to and he made a decision to pay whatever he had to pay to guarantee industrial peace and some measure of moderate efficiency.

The result was a massive workforce of Aussies – most of whom Yamada considered unnecessary but all of whom were paid very high wages. He only wanted five Australians to work on board the ship with his own team and by all accounts the two groups built up a tremendous rapport.

It was the army of fetchers and carriers on the beach that caused the friction. He was forced to employ as many as 60 men. Yamada had no high opinion of many of these workers and he didn’t hesitate to tell them so, usually with a polite smile on his face. Once, when a group of dockers was sitting on piece of equipment that was needed on the ship he yelled from the deck: “Off your backsides and move – please.” Finally he is reputed to have agreed to pay some of them just to sit on the beach and keep out of the way of those who were actually working.

Naturally those involved in the work recall things differently and there was a tremendous amount of ill-feeling aroused whenever the Aussie workers were criticized, which was often. Union delegates have argued that the pay rates were not unreasonable for the work and they have pointed out that the beach work involved 12-hour shifts – increasing to 24 hours when serious pumping began. They never divulged just how much their members were paid, however, simply explaining that it was “a considerable amount”.

It was the manning scale, not the pay, that was bleeding Yamada dry, but pay became an issue when he wanted tugs to take off the refloated sections of the wreck. It’s hard to know just what really happened when Yamada needed tugs at the Sygna.

On all the evidence available it seems likely that Yamada offered to pay a hefty bonus to the tug men. If so, the tug men wouldn’t have had a problem with that, but there is more than a hint of evidence to suggest that the towage companies were worried that this extra money might be seen as a precedent that could affect future work. The unions offered to sign declarations that the Sygna payments would be a one-off, but the signs point to a management “go-slow” on the issue.

Yamada was bled again. As a stop-gap solution he hired the sea-going supply ship Lady Vera for three times its normal charter rate and paid bonus wages to a crew that amounted to twice its normal complement.

The Sygna refloated on September 6 and promptly but not unexpectedly broke in half. The bow section was towed to Port Stephens on September 10, leaving the stern – still holed and leaking badly – to be refloated another day.

When the expensive Lady Vera finished its job and moved off to a waiting contract, Yamada started seeking another tug. Tugs were available, but it seems the two towage companies were frightened of letting the crews be paid the sort of money that was earned by those aboard the Lady Vera. Yamada’s men, believing a deal would be done, kept working to refloat the stern section of the Sygna. But when they got it afloat there was still no tug and, after winching it painstakingly into deeper water, they were forced to let it settle again onto the sand. Suddenly, a tug was available, but weather caused problems. On September 26 big winds whipped up and pushed the half-ship back inshore, almost to the same point it had rested before Yamada’s men got it afloat.

After much more acrimonious and unproductive arguing between Yamada, the tug owners and the unions representing the tug crews, the sea-going tug Warawee was finally sent from Sydney in October. And while the companies always claimed they paid the men no more than award rates it is commonly accepted that Yamada’s hand was in his pocket again. Which was no more or less than he’d expected all along. But now it was too late.

By November the stern section was structurally damaged from all the refloating and re-grounding. The salvage job, already incredibly expensive, had become completely unviable to complete. To November 18 the salvage effort had cost $1.6million, with $600,000 of that paid to firms and workers in Newcastle.

The Norwegian insurer of the ship, Skuld, which had guaranteed a large chunk of the salvage cost, summed up its view of the situation with brutal and perhaps unfair frankness:

Mr Yamada is bleeding to death. He is the loser. The people in Newcastle are the only winners because of the money spent there in the operation. Yet their contribution was very limited. Yamada has smiled and paid. We feel very, very sorry for him. He was very optimistic when he bought the wreck. The Japanese crew were very capable and did good work. It is sad to have seen them work so hard for so little result. The workers from the Australian side worked very little and achieved an enormous amount of money.

Before he went back to Japan, Yamada took the bottle of sake from the Sygna’s mast. He tried to persuade the Norwegians and the Australian Government to finance one more salvage attempt but nobody wanted to get involved.

The 116m bow section of the ship – containing 4000 tonnes of steel – remained at Port Stephens until January 1976, when it was finally towed to Japan. The stern section sat on Stockton Beach, a favourite spot for photographers, fishermen, surfers and four-wheel drivers. Its rusting hulk was starkly and strangely beautiful: a reminder of the tremendous power of the angry elements and of a once-in-a-lifetime storm that left its mark on a generation.