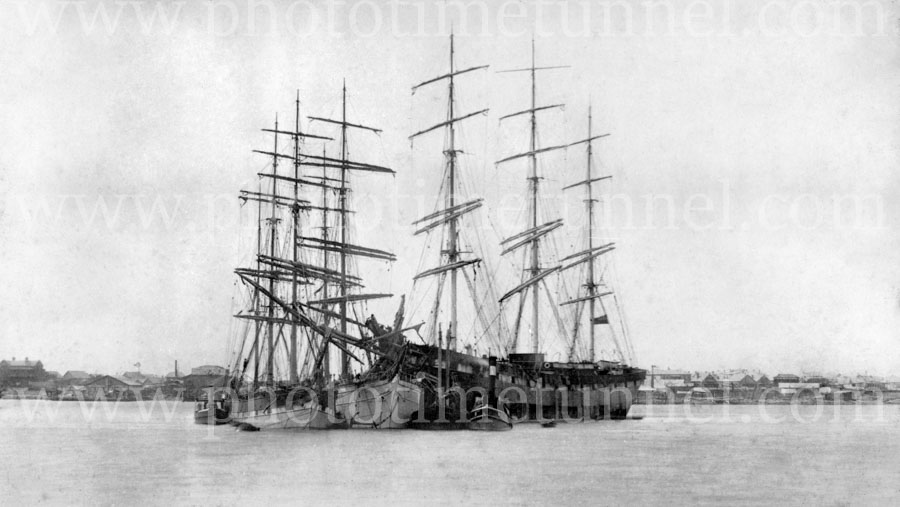 It was just on dark, April 4, 1902; the weather was taking a turn for the worse, and among the fleet of ships that appeared off Newcastle, NSW, hoping to enter harbour, was one of the world’s biggest three-masters, the 311-foot-long (95m) Ditton.

The harbour, apparently, was already reasonably crowded, and there were two fully laden ships – The Port Crawford and the Peeblesshire – tied up at the so-called “farewell buoys” in the channel, ready to leave next day. It was a situation fraught with danger and, unfortunately, the danger was not avoided.

The Ditton and her sister ship Speke had been launched in 1891, towards the end of the sailing ship era. They were said to have been the largest steel-hulled sailing ships ever built, yet despite their great length they carried only three masts. The Speke was wrecked at Phillip Island, Victoria, in 1904. The Ditton lasted until 1921, but its visit to Newcastle in 1902 was perhaps its moment of greatest fame.

When the events of the evening of April 4 were considered at an inquiry later that year, many wondered why only one tug was sent to bring in such a big ship in such squally weather when the harbour was so crowded. The Newcastle Morning Herald reported that, earlier in the day, two other ships had already found themselves in trouble, thanks to the south-westerly gale, and it only due to hard work by harbour tugs that they were safely berthed.

Having just arrived from Melbourne, the Ditton was taken in tow by the J&A Brown tug Champion, with pilot Caskey overseeing the operation. As it happened, once the ship was safely around Nobbys, the tug was almost irrelevant. The towing hawser was slack as the ship was pushed along by the wind. The pilot later insisted he had instructed the ship’s mate to be ready to drop the anchors at a moment’s notice, but when it became apparent that the giant ship was certain to ram the two loaded vessels lying at the Farewell Buoys, it was claimed that the starboard anchor was fouled and could not be dropped. Minutes were wasted and by the time an anchor was let go the momentum was unstoppable.

The long spike boom projecting from the Ditton’s bow smashed through the rigging of the Port Crawford. Spars came tumbling from the Port Crawford’s masts, snapping off the Ditton’s boom. The Port Crawford was cannoned into the nearby Peeblesshire, and the three ships wound up locked together in a spectacular embrace. It was about 6.45pm when the collision occurred. It was pouring rain, and squally, and many expected at least one of the ships to sink. Many of the crew of the Port Crawford abandoned ship, launching a boat and heading to shore. One luckless member of the Ditton’s crew, 23-year-old James Hobbs, had been sent out onto the ship’s jibboom to stow a sail, and after the crash he was nowhere to be found. The light of day revealed his body, crushed under the mess of smashed rigging. He was buried in Sandgate Cemetery.

Things didn’t get better for the Ditton during its stay in Newcastle. Repaired after the collision it had gone to the coal cranes to load. On July 3 it was ready to leave the cranes under the charge of harbor pilot Beale when it swung wildly and hit the nearby ship Anemone, which careered into another ship, the Sardhana, creating another pile-up. At the subsequent inquiry the pilot was held to have been at fault.

The Ditton was later sold to Norwegian interests and kept sailing under the name Nordfarer and then changed hands again to become the Bragdo. In that guise she was wrecked, on November 2, 1921, at Boobjerg, Jutland, Denmark.

The Port Crawford, which started its life in in 1883 as the Turkistan, was later sold to Norwegian interests, renamed Margarita and broken up in 1924. The Peeblesshire, building in 1879 also ended her days under the Norwegian flag with the name Bergliot, and was wrecked in February 1907.