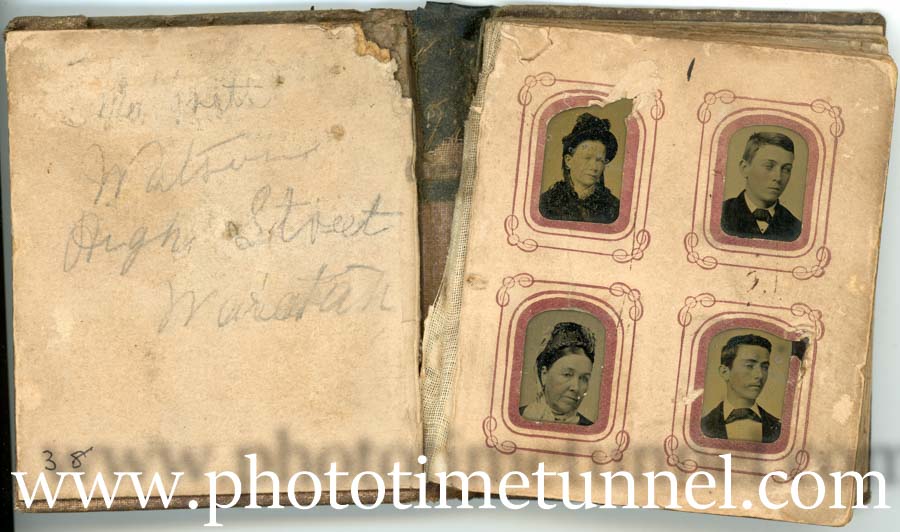 A tiny photo album, with even tinier tintype portraits.

Tintypes reached their peak in the 1870s and were extremely popular with travelling photographers because they could be developed and fixed within minutes.

I’ve collected a small handful of tintypes and, interestingly, most of them date from the 1920s and were created in the Blue Mountains, outside Sydney, Australia, where a photographer named Dan Evans once plied a thriving tourist trade, photographing visitors to the mountains alongside peculiar figures including makeshift versions of Mickey Mouse, Felix the Cat and a curious creature named the “mountain devil” (based on the spiky seedpod of a local wildflower).

It seems relatively little is known about Dan Evans, but his photos are part of the folklore of the Blue Mountains and are keenly sought by some collectors. Some information about Dan Evans can be found here.

I recall having read that Evans was forced to stop using Mickey Mouse and Felix the Cat as props for his photos because of legal threats from the cartoon studios that owned the rights to those famous characters. That may or may not be correct. Nevertheless, I find the photos especially appealing on account of the rather sinister aspect of the props.

Interestingly, in recent years tintype photography has made a comeback amongst artist photographers who are drawn to the dark, moody character of the technique.

Lost islands of the Hunter River