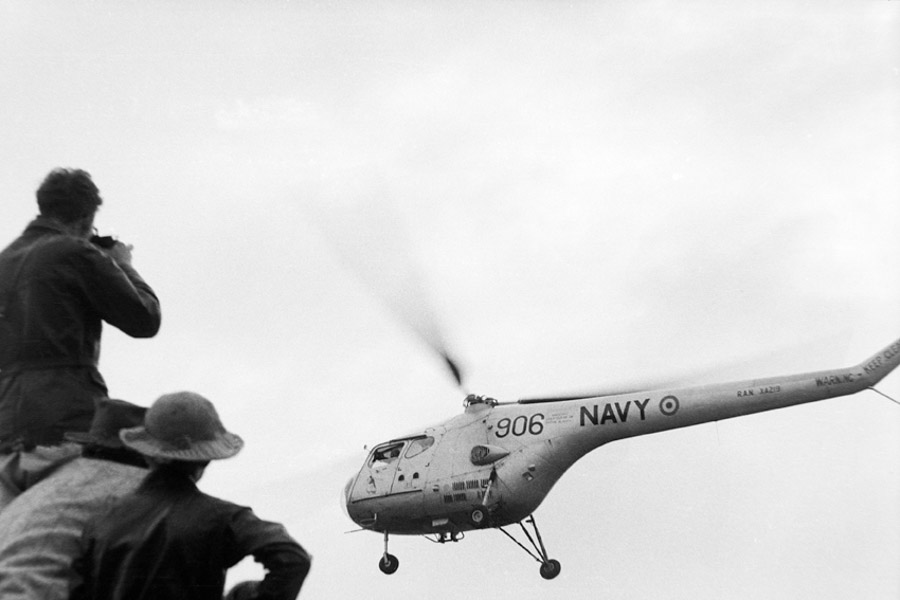 RAN Bristol Sycamore helicopter at Maitland during the 1955 flood. Photo by Jim Lucey

The huge floods that hit NSW in February 1955 presented one of the first opportunities for helicopters to prove their value in civil rescue operations in Australia. Helicopters were still something of a novelty at the time, and rescue techniques were far from established.

Helicopters still a novelty in 1955

Seven helicopters were committed to the operation, with most flying from the naval air base at Nowra and another RAAF machine coming all the way from Woomera in South Australia. One of the choppers was sped through its maintenance program at Nowra (10 days telescoped down to 40 hours). The nearest pilot was aboard HMAS Sydney, en route to Fremantle. He was flown off to Sydney and driven to Nowra where he picked up the chopper and flew it to Williamtown RAAF base, near Newcastle. The Sydney was was turned back to Melbourne and its two helicopters were flown in a series of hops to Williamtown. The choppers did superb work and directly saved at least 110 lives in places as far apart as Maitland, Dubbo and Narrabri.

Almost all the helicopters were Bristol Sycamores, one of the earliest production helicopters in the world. The first on the scene in the Hunter Valley was piloted by Lt Cdr Gordon McPhee, who flew from Nowra to Williamtown and in near-darkness and soupy conditions on Thursday night was talked down by radar in one of the world’s first helicopter ground controlled approaches.

Lt Cdr McPhee, with observer and winchman Lt Bren Hill, was involved in the tragic crash next day that remains one of the focal points in any account of the 1955 flood in Maitland.

The cotton mills at Rutherford had shut on Friday to let workers go home and prepare for possible flooding of their homes. Some of those who lived on the eastern side of town chose to walk home along the railway track. A number of these were caught far from high ground when the Oakhampton levee broke and released a raging wave of water that thundered towards the rail line. Railway signalman Thomas Shand, then 35, had been manning a little signal box that stuck like a sore thumb out of the low-lying expanse of ground. He watched all morning as water steadily accumulated around his elevated structure and he saw the men walking along the tracks in water that lapped around their ankles.

Nobody had any reason to suppose they wouldn’t safely cross the flat expanse, but when the levee broke everything changed in a moment. As water began to swell around the signal box Mr Shand realised he had to leave. He put on his coat and boots and grabbed his bag but by the time he was ready to go he saw a 6m wall of filthy water roaring towards him with a noise like thunder. Knowing he could never make the distance from the box to the station in time, he resigned himself to staying in the box.

Climbed into the signal box

Other men, seeing the water approaching, raced to the box and climbed in with him until there were 14. Among those to join Mr Shand were 57-year-old Vince Hughes, of Morpeth, and cotton mill workers Aub Smith, (35, East Maitland) and Joe O’Brien (Maitland). Brian Vitnell was there too, with his father Arnold. Brian, 16, had been helping his father shift furniture from their home in Odd Street to high ground behind the hospital. “We couldn’t get back across town and somebody suggested we walk along the railway track,” he said. “By the time we got halfway across we saw this great wall of water coming at us and the signalman called us up into his little building. The signal box was getting buffeted around. We knew there was a helicopter and we hoped it would rescue us,” he said.

Two other men, unable to make it to the signal box, clambered up a signal post. When they saw a helicopter nearby they started waving frantically. The helicopter lowered its grappling rope, took one man off, carried him to higher ground and then returned for the second.

It was almost half-past-noon when witnesses near the Maitland railway bridge saw the men in the signal box. Not long after the water hit the box the men inside knew it wouldn’t withstand the force of the flood. They were aware of the presence of the helicopter, and Mr Shand used a block of wood to bash one of the roof sheets off to make access for the aircraft’s grappling rope. Brian Vitnell climbed out onto the roof, but before the helicopter could get to the box the building began to collapse.

Weighed down and swept away

People on the railway  bridge were shouting and pointing with hands and umbrellas, trying to show the pilot where the trapped men were. Mr Shand said he felt the signal box give a few lurches and he realised it wouldn’t last long enough for the aircraft to make a rescue. “We got onto the landing. We knew we’d have to jump for it,” he said.

Joe O’Brien, too panic-stricken to take off his coat and boots, was weighed down and swept away. His body was found a week later in Fishery Creek. Another four of the men were rescued nearly eight hours later by a Caves Beach surfboat among some debris on a small haystack at Louth Park, having careered downstream holding a 10m plank.

Almost at the same time as the men jumped, the signal box collapsed with a sickening sound, spilling shattered timbers into the flood. The helicopter swooped down and hovered over the men as they were sped along in the filthy tide. Hundreds of witnesses shouted with excitement as the chopper dropped its grappling ropes and steadily lowered itself towards the water where Vince Hughes and Aub Smith were thrusting their arms to the sky.

Brian Vitnell said he and his father had surfaced close to Vince Hughes and Aub Smith. Brian’s father steadied the rope for the older men to grip. One grabbed the rope and was steadily raised. The other grabbed his legs and the helicopter rose 30m or so, seeking a safe spot to let them down. Witnesses said they could see the fear on the faces of the dangling men.

Could see the fear on their faces

An account of the accident written years later in the history of the Navy’s Fleet Air Arm blamed the fact two men grabbed the rope for what happened next. The Sycamore was, by all accounts, a difficult aircraft to fly at the best of times but was manageable with one man on the winch cable. When two grabbed hold, however, the aircraft had no reserve power. Add to that the fact that neither man was properly in the “strop” at the end of the cable and the prospect of disaster was high.

Pilot Commander McPhee was trying to land the men on the bridge where the spectators were standing, but at the last moment he seemed to have seen the powerlines were too close together for the manoeuvre he had in mind. He told the later inquest that he was concerned the speed of his descent might have put the onlookers in danger, so circled away to make a slower approach.

As the aircraft shot sideways to make another circuit the men on the rope began to swing and spiral. The man holding the rope seemed to lose strength and let go. Both men plummeted towards the earth, separating as they fell. There was a loud explosion as one of the men hit the high-tension wire and his body arched, engulfed in a flash of blue flame. He bounced, then hit the wires again, setting off another flash and explosion and snapping the wires. His body hit the water and he too was swept away. Some witnesses said the other man hit the water with a splash and was instantly carried away. Others said he shared the horrific fate of his companion. The bodies of the two men were never recovered.

The horror didn’t end there. The helicopter’s grappling rope flicked up and contacted one of the live wires. The aircraft went instantly out of control and spiralled into the raging water. Witnesses saw Cdr McPhee and Lt Hill, wearing yellow lifejackets, break free of the wreck. They were torn away in a moment and vanished in the flood. Luckily for the two men, an amphibious army DUKW working a few kilometres downstream managed to pick them up.

To add still further to the saga of tragedy, the same DUKW, with its crew of five, hit powerlines the next day near the railway station, resulting in the electrocution of  three of the men. Police constable Arnold Garland, of Maitland, Ambulance bearer William Brown of Telarah and Constable Bernard Orrock, of Sydney Water Police were accompanying Sgt William McGrath and signaller Eric Chards, both of Sydney. Some said they were searching for two men who were supposed to be marooned on a haystack at Louth Park, but 2KO radio announcer Ron Hurst said the craft was part of a small convoy sent to inspect the condition of the Long Bridge.

At the time of the accident Constable Orrock was sitting on a spare tyre, holding a rope that was joined to a dinghy the duck was towing. Witnesses said the duck’s radio aerial contacted powerlines. Instantly the entire vehicle was outlined in blue flashes and a man was hurled 6m into the air. Sgt McGrath and Signaller Chards were believed to have been killed instantly. Constable Garland, thrown into the water, felt as if he was paralysed. He was rescued by an air force padre who dived in to save him.

The late Constable Orrock, aged just 25 at the time of his death, was posthumously awarded the Queen’s Police Medal for Gallantry and a Bronze Medal from the Royal
Shipwreck and Humane Society.

Cdr McPhee was awarded an MBE for his efforts. Interestingly, just weeks after his helicopter crash he was sufficiently recovered to pilot another Sycamore in a mock rescue and aerobatic display for the benefit of patrons of Sydney’s Royal Easter Show.

Weeks after the crash, parts of the wrecked aircraft were found by children playing in Fishery Creek. In March 1958 the tail section of the helicopter was pulled out of the creek by a dragline clearing away flood wreckage.

One of the men who had taken refuge in the ill-fated signal box was trotting trainer Dick Osborn. On that Friday morning he had just delivered some horses to the West Maitland saleyards and was walking home along the rail-lines to his East Maitland home. “I was going to catch a train home at Maitland station but the water got so bad that I sought shelter in a railway signal box which was then near Regent St,” he recalled in an interview decades ago. One of his companions noticed the clock had stopped, another pointed out that the box was no longer level and soon all the men could hear the ominous creaks and groans that portended the structure’s collapse. Mr Osborn bailed out, preferring to take his chances in the water, and two other men followed him. From the water they glimpsed the signal box as it fell apart and they saw the two men fall to their deaths from the helicopter. They travelled 5km with the buffeting waters, hanging on to the remains of a haystack, until they were rescued by the Belmont-Swansea lifeboat at Gillieston Heights.

The Jim Lucey collection of photos of the 1955 flood at Maitland is held by the University of Newcastle. The collection can be seen by clicking here.

Santa, a gallery of amateurs