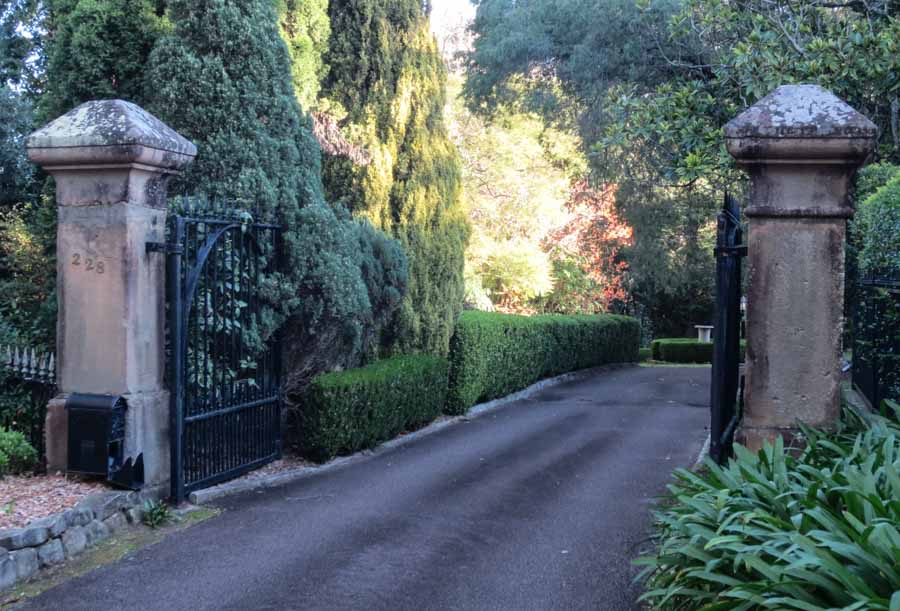 On March 21, 1907, thousands of citizens of Newcastle, NSW, attended the Upper Reserve (nowadays more commonly known as King Edward Park) to witness the grand opening of a special gift to the city.

The donor was businessman Joseph Wood, best remembered for his involvement in the city’s Castlemaine Brewery but active in many other spheres. Mr Wood had donated a pair of splendid ornamental gates to mark his 50th year in Newcastle, and these were officially opened in the evening. Festoons of electric lights were strung from the gates at the top of Watt Street to the rotunda.

This location at the top of Watt Street would be not far from the greens of the former bowling club.

While Mr Wood had spent an estimated £250 on his gift, the council matched his effort by building neat paths and roadways nearby. According to the report in The Newcastle Morning Herald, Mr Wood’s party turned up shortly after 8pm. Unfortunately Mrs Wood had slipped while getting into her carriage at the Victoria Theatre earlier in the day and was unable to attend. Mr Wood gave a speech applauding his own generosity and calling on the council to spend more money beautifying the city, even if it meant raising rates. Then the gates were opened and he was driven through in his carriage.

Newcastle Mayor A.H. James enthused that the event “marked the opening of a new era in the civic life of Newcastle” and urged other wealthy businesspeople to follow Mr Wood’s example. The opening was followed by various musical entertainments and exhibition of limelight pictures, before the hat was passed around to raise money for more park improvements. The amount raised was a disappointing £10 1 shilling and eightpence.

The Mayor also expressed the hope that Mr Wood “would be spared for many years to look upon the gates”. It was not to be. Mr Wood died the following year, on November 23, 1908, at his Church Street home, the famous “Woodlands” – later to become a private hospital. He was 66 years old.

Sadly, the gates don’t appear to have been treated with as much respect as Mr Wood may have hoped would be the case.

An illustrated article in The Newcastle Herald of October 23, 1936, reported that: “Progress in the extensive improvements being carried out near King Edward Park by Newcastle City Council are indicated by the removal of the big gates which guarded the entrance to the park from Ordnance Street”.

By 1947, according to an article written by local historian Wilf Goold, only one gate pillar remained “at the entrance to King Edward Park, at the top of Watt Street” and it seemed “sad and forlorn”. The handsome wrought iron gates and three of the four freestone pillars had disappeared.

On April 28,1950, The Newcastle Sun reported that Newcastle City Council was to remove “two stone pillars, which originally formed portion of the city gates at the old entrance to King Edward Park” because they had become “dangerous”. “When the entrance to King Edward Park was transferred to the west of the bowling green some years ago the gates were removed. The pillars and gates will be stored at the council’s depot at Corlette Street until such time as they can be used in some portion of the park so that their identity with early Newcastle will not be lost,” The Sun reported.

Later that year, on November 22, The Newcastle Herald reported that the RSPCA had asked for the pillars and gates for use at the front of its new dogs home at Myer Park. The city engineer, Mr Baddeley, was reported as replying that: “The old gates referred to did not now exist, and the stone pillars which supported the gates had been removed from King Edward Park and stored at No.2 Sports Ground for use in a park”. The pillars had some historical value, had been donated to the city and it was not thought advisable to donate them for use as an entrance to the animal hospital.

In 1953 The Newcastle Sun suggested that the removal might have been related to the fact that the entrance where the gate was built was potentially hazardous, requiring “a sharp right turn to avoid going over the cliff”. Possibly for that reason, another entrance was made further west. The Sun did not speculate on where the gates might have gone.

Fast-forward to the year 2020 and not even the lone pillar remains on the original site of the gates. The inner pillars had been restored at some point and were standing at the top entrance to the park (The Terrace).

When I visited on July 9, 2020, however, they had disappeared again. I was told they were removed in connection with the Supercar races. In their place were some modern edifices.

I was told by a couple of Newcastle heritage enthusiasts that some elements of the old gates may have managed somehow to migrate to a home in New Lambton Heights.

I followed up information I was given and visited a home in Croudace Street, on the corner of Floralia Close, where I found two pillars which seem identical to the two outer pillars of the gates that once stood at the entrance to King Edward Park. It is clear that the iron gates that now swing from the pillars are not the original iron gates donated by Joseph Wood. When I asked the owner of the property – an old acquaintance of mine, retired Newcastle medico Dr Raj Gandha – what he knew about the gates, he told me he knew they had come from a park, but he wasn’t sure which one. He had bought the property in 1985, he said, and he believed the pillars had been placed there more than 60 years ago by a previous owner, whom he said had worked for many years in a senior role at Newcastle City Council. Oddly enough, perhaps, it seems that owner was the former city engineer, Mr Baddeley, who in 1950 had declined to give the pillars to the RSPCA on the basis that they were intended to be placed in a public park.

I’d be curious to know whatever happened to the iron gates themselves: Perhaps they simply rusted away?

The next mysterious gate migration involves the wrought iron gates from Maitland Town Hall, which were reputedly designed by architect James Scobie and made at the Simms foundry in Morpeth in 1889.

I would be very glad to learn why the gates made their unexplained move to Newcastle, with whose help and at whose expense.

Building the Hexham Bridge over the Hunter River