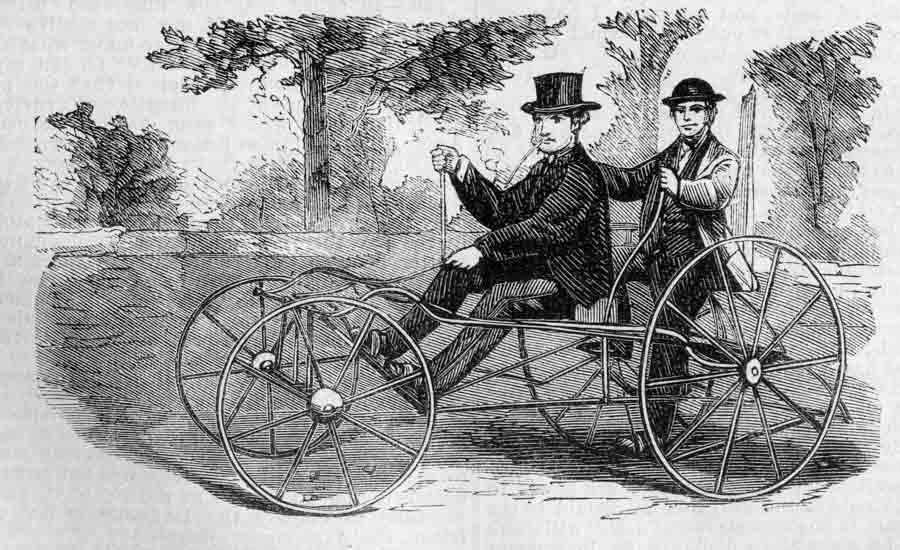 It was 1868, and the pages of the monthly publication The English Mechanic were about to be deluged with correspondence from inventors keen to create a perfect personal transport machine.

The rise of the middle classes, the spread of technical education and the increase in literacy created a large pool of would-be inventors who shared their ideas – good, bad and indifferent – in cheap specialized journals and through “mechanics’ institutes”.

Up until then, horses and horse-drawn vehicles had been the main form of land transport, although the invention of the steam engine and the rise of the railway had laid the groundwork for self-powered motor cars. But horses were expensive to buy and keep. They needed a lot of space, a lot of care and they made a lot of mess. Many people dreamed of some kind of mechanical alternative, and the would-be inventors of the rising skilled middle classes applied their minds to the problem in an astonishing variety of ways. In America, Great Britain and Europe, hundreds of people started building “velocipedes” – a name coined in France, meaning “swift feet”.

Actually, as the editors of The English Mechanic noted more than once while they dealt with the avalanche of velocipede correspondence that was suddenly coming their way, the craze was not exactly new. A German inventor, Baron Karl von Drais, had built what he called a “laufmaschine” (running machine) in 1817. This was a machine that looked much like a modern bicycle, but had no pedals and was propelled by the feet. These contraptions were labelled “Draisine” or “dandy horses”, and according to the English Mechanic (October 23, 1868, page 97):

The ‘velocipede’ which is now attracting attention is simply a new name for the same kind of invention which was in quite general use some 50 years back. It was then called a dandy horse probably from its use being mostly confined to the dandies of the period. At that time the fashionable men might have been seen on any of the popular drives, propelling along with their coat-tails at an angle of 45 degrees, to the infinite satisfaction of themselves and the envy of the non-possessors of the coveted establishment. The vehicle of that time was constructed like those lately introduced, excepting that it lacked the pin on the front wheel by which it could be kept going when once fairly started. It was propelled by the feet up on the ground and after a good speed had been attained the feet were temporarily rested upon a small projection at each end of the front axle until the horse required further propulsion. The dandy horse, however, died out of use about the year 1820, in some measure owing to several serious accidents through their use – chiefly ruptures which the springless nature of the rider’s seat was very apt to produce. But they were in high feather once, and we read in old periodicals that Fox, Sheridan, Pitt and other notables of the period patronised the velocipede extensively in Saint James’s park – taking their constitutional on the dandy horse after a hard night spent in the House of Commons or around the gaming table.

An American correspondent wrote in February 1869 that he had spent some months in Paris in 1855 and had seen there many velocipedes “passing rapidly through the Champs Elysees and along the boulevards without exciting much attention from either man or beast”. In Paris and in the United States, velocipede performances were being held on music hall stages, and a velocipede race in Cincinnati carried prizemoney of $100.

We had but little thought that the velocipede would have attracted so much attention at home and abroad and are still averse to our columns being continually glutted by absurd communications on velocipede construction. It is however our duty to record for the use of such readers as may feel interested in the machine of the period the most recent improvements in its construction so that for their special benefit we annexe a selection from the most recent American machines and must observe that our kinsmen across the Atlantic are more mad on modern hobby-horse riding than our neighbours of France. In England the velocipede is not yet a favourite among costermongers, who still adhere to their barrows, baskets and humble but useful donkey carts.

Mr Hemmings says that his son of 13 years old propels one of these machines of five feet diameter at a pace that keeps up with good roadsters and does not allow them to pass him. The main wheel has a double rim or has two concentric rims, the interface of the inner one having a projecting lip for keeping the friction rollers and the friction driver in place: each of these being correspondingly grooved on their peripheries. The frame on which the rider sits sustains these friction wheels in double parallel arms on the front one of which is mounted a double pulley with belts passing to small pulleys on the axis of the driving wheel. This double wheel is driven, as seen, by cranks turned by the hands. The friction of the lower wheel on the surface of the inner rim of the main wheel is the immediate means of propulsion. A small binding wheel, seen between the rider’s legs, serves to keep the bands or belt tight. The steering is effected either by inclining the body to one side or the other or by the foot impinging on the ground – the stirrups being hung low for this purpose. By throwing the weight on the stirrups the binding wheel maybe brought more powerfully down on the belts. Over the rider’s head is an awning and there is also a shield in front of his body to keep the clothes from being soiled by mud and wet. Quoted from The Scientific American

We reproduce an engraving of an ice velocipede from Harpers Weekly. The frame of this velocipede is built like those which are commonly in use in America. It has but one wheel steered with the bar as in the land machine but armed with sharp points to prevent its slipping. Instead of the two wheels behind are two sharp steel runners like those attached to the ice boats. This velocipede is propelled with astonishing rapidity.

The Topliff and Ely adjustable velocipede.

The accompanying engraving shows a three wheeled or two wheeled contrivance at the will of the rider. It is splendid. See the carelessness of the rider in the perspective engraving, then see the means by which he obtains his carelessness shown in the accompanying diagrams . The axle carrying the rear wheels is of a depressed V form (exaggerated in the diagrams two more forcibly present the idea). When the rider mounts the machine it is as represented in figure 2, the wheels at the outer extremity of the crooked axle. Then it is an ordinary three wheeled velocipede. In this state the rider may run for an indefinite distance but when he has learned he may, by a single movement of the lever seen in the perspective drawing, reverse the position of the axle by a half-revolution and run the wheels together as seen in figure 3. In this case the two wheels where they impinge on the ground are simply one. As these wheels are constructed to run on any portion of this crooked axle no difficulty is experienced in holding them at any intermediate point desired while they are prevented from coming together by a fixed collar or flange on the axle at the point where the two angles meet. In all other respects this velocipede is similar to others now in use. It is manufactured by Topliff and Ely, Elyria Ohio, United States.

It is worked by both hands and feet; the operators sitting face to face and using the same levers. The two 5-inch cranks are placed at quarter circle, which does away with dead points. A pair of self-acting face ratchets are placed at the inside of each nave, allowing the driving wheels to turn corners freely and the levers to be at rest in descending hills. The wheels are of wood – the rim being in one piece. They are two feet six inches in diameter. Spiral steel springs are used; two to each axle. The two gentlemen who have constructed it travelled to business on it daily, three miles each way, on a very hilly road – the rise being about 300 feet in going and 180 feet in returning. The time occupied in going one journey ranges from 20 to 30 minutes according to the state of the roads. The machine weighs 3/4 of a hundredweight. It can be taken to pieces in a few minutes and packed for railway travelling in case of a break in the weather.

A velocipede for invalids

J. Coxwell proposed this design in February 1869 to suit invalids and people with no legs and only one hand. It was to operate by clockwork, with a spring to be wound every mile or so. He had not actually built one: just thought it was a good idea.

The Day Out velocipede, another theoretical model proposed in June 1869, was designed for three gentlemen and a lady, “with the gentlemen all working and the lady of course sitting at her ease.”

WT, of Trindon, proposed a balloon velocipede in July 1869 (left). The balloon’s main function was to stop the machine from falling over, although it was suggested it might also help make going up hills easier. It is fitted with a little oil lamp to keep supplying hot air to the balloon.

William Hodson claimed in October 1869 to have ridden the velocipede pictured below 76 miles in one day, and to have “taken the Sydenham Hills”.

A single wheel, and very tall

A would-be inventor who called himself Conic suggested the design at left to reduce friction. He guessed it would travel at about 25 miles per hour. Many correspondents doubted the value of his suggestions. January 1869.

A hexagonal frame, a couple of 2.4m wheels, shoulder yoke, foot stirrups, hand cranks and brakes you worked by dropping your elbows. Quite a beast. June 1869.

This clever design converted from a tricycle to a bicycle. It was supplied with optional single wheel, and double-wheel on a crank, for use on the front axle. A “patent self-acting crank” enabled the machine to descend hills without the the pedals turning.

Of course, the two-wheeler evolved to win the day, and the refined models now in use would astound the inventors of the 1860s. But I think it would be fun to reconstruct some of these old-style vehicles, just for the comparison.

My heart tells me we should change the date