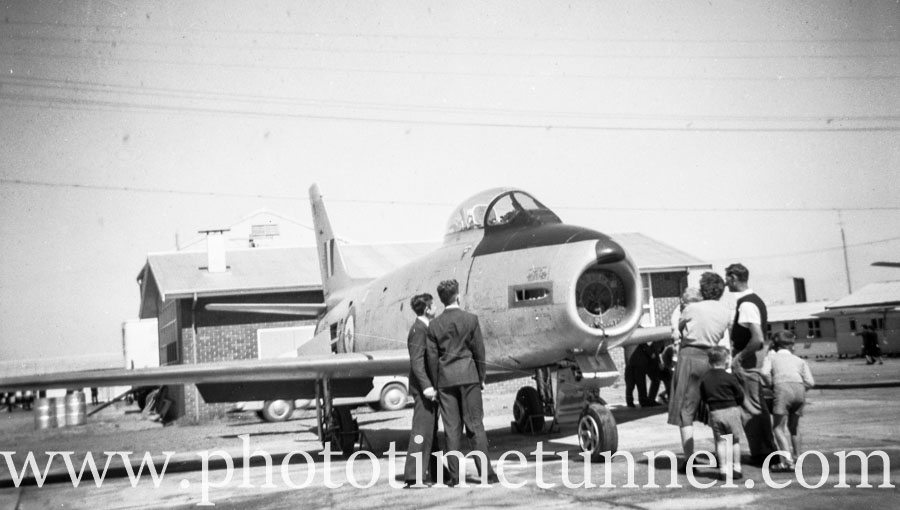 WHILE Newcastle suffered some light damage when it was shelled by a Japanese submarine in 1942, the city has been far more heavily scarred by the accidental impact of “friendly” forces.
During the 1960s two Korean War-era Sabre jets from the Williamtown RAAF base smashed spectacularly into city suburbs. In each case, it was declared a miracle that no civilians were seriously hurt, although – tragically – one air force pilot lost his life.
The first suburb to be hit was Mayfield, on Wednesday, November 12, 1963, when one of eight fighter jets engaged in an exercise off the coast went out of control. Pilot Officer Ronald Slater baled out at 11,000 feet and, as he drifted to earth, he watched his stricken plane plummet into densely populated suburbia.
“When my parachute opened I watched the plane going down but lost sight of it when it got a long way below me. When I was about 1500 feet I could see thick smoke rising and hear sirens. My biggest worry was that someone might have been hurt in the crash,” he said later.
The plane pancaked into the backyard of a house in Sunnyside Street, Mayfield, bursting into flames and destroying a flat next door. Resident Edythe Tillitzki had just left the house.
Pilot Officer Slater wound up with his parachute tangled in powerlines in Crescent Rd, Waratah, and his ejector seat landed on the railway line near Waratah station.
Ronald Slater was later to win a Distinguished Flying Cross in Vietnam.

An interview with Ronald Slater can be heard here, on Newcastle University’s Living Histories website.

The next Sabre smash came three years later, when Pilot Officer Warren Goddard’s fighter exploded over the Newcastle suburb of The Junction in the early evening of Tuesday, August 16, 1966. He had been taking part in night flying exercises and disaster struck as he entered cloud at about 7500 feet.
The doomed fighter was seen diving steeply towards the city, skimming three-storey flat buildings in Darby Street, Cooks Hill, before exploding. Witnesses described the explosion as “like a giant firecracker”. Pieces of aircraft crashed through roofs and walls of houses as residents prepared their dinners. A blazing wing section, with wheel attached, landed near a house in Union Street. A Kenrick Street resident, Mr K. Johnstone, saw part of the jet come down in his backyard, shattering his garage and destroying his 1956 V8 Ford Customline.

A Glebe Road resident, standing in the kitchen of a two-storey house, saw a large section of the Sabre land in the backyard. The resulting fire destroyed the house. Three people were taken to hospital, two with shock and one – 30-year-old Darryl Witenden – suffered a chest injury from a piece of aircraft wreckage that hit him when he walked out of a nearby pub. He felt a blow from “something really hard”, then walked back into the pub and asked for a brandy. “Next thing I knew I was in hospital,” he said at the time.


Pilot Officer Goddard, 30, from Perth, was found dead, hanging in the cords of his parachute in a house at 60 Glebe Road. The occupants of the house had just stepped out for an ice cream in a nearby shop, and the pilot fell directly onto the chair where the house’s owner, Mrs Irene “Mona” Bradley, had been sitting to watch television just minutes before.

Another lucky escape was experienced by 33-year-old waterside worker Keith Johnstone, whose Kenrick Street home backed onto that of Mrs Bradley. He’d not long come home, had parked his car in his garage, gone inside and was going back out again when the jet ploughed into his car just 25m from where he was standing.

The Brickocski family home at 59 Glebe Road was extensively damaged, and numerous other buildings were hit by wreckage and damaged by resulting fires.

On the road in the ’40s, with batteries, steam and gas

Pozieres 1916: hell on earth under shellfire