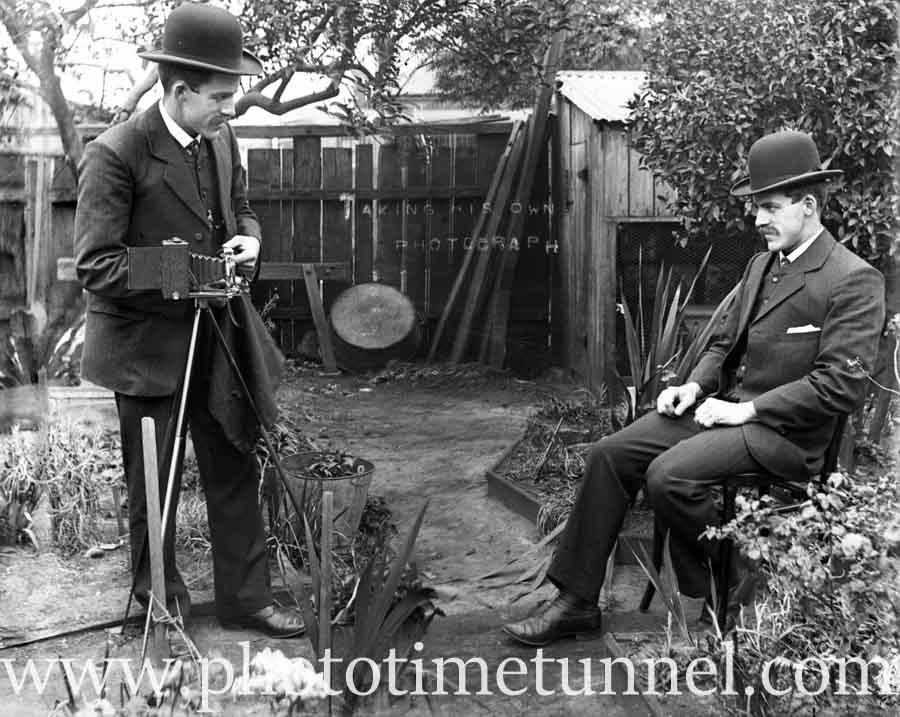 William Fraser in one of his own trick photographs - taking his own picture.

Among the photographers active in Newcastle in the early 20th century, William Fraser deserves a special place. William might be described as a “semi-professional” photographer, since his main job was as a cabinet-maker, working from the Newcastle suburb of Hamilton. The body of work he produced in both spheres was impressive, and numerous examples of his skilled craftsmanship survive.

William’s parents were Charles Fraser (who had come from Scotland when he was seven) and Matilda (nee Pepper). The couple was living and working in Lindsay Street, Hamilton, when sixth child William was born in 1882. William trained as a cabinet-maker with Archibald Hay, and ultimately opened his own business. He married Britannia Randall at St Peters Church in Denison Street, Hamilton, in 1909, and the couple had four children.

As a cabinet-maker William produced all types of work, but made a speciality of ornate furnishings for churches. Examples of his work adorned dozens of churches across the Hunter Region, and much still survives – including in Newcastle’s Christ Church Cathedral.

He also created numerous timber honour boards, including many during and after World War I to commemorate those who served and fell during the conflict.

William was an athlete too. He was a keen cyclist and gymnast.

In the photographic field, William produced a huge body of work, mostly on glass plate negatives. As well as portraits and landscape work in the Hunter area, he created many “trick” photographic images and also stereoscopic views.

After his death in 1958 William left a substantial legacy of negatives were fortunately been lovingly preserved by his now-late grand-daughter Anne Hudson, who provided many images for our book, Images on Glass.