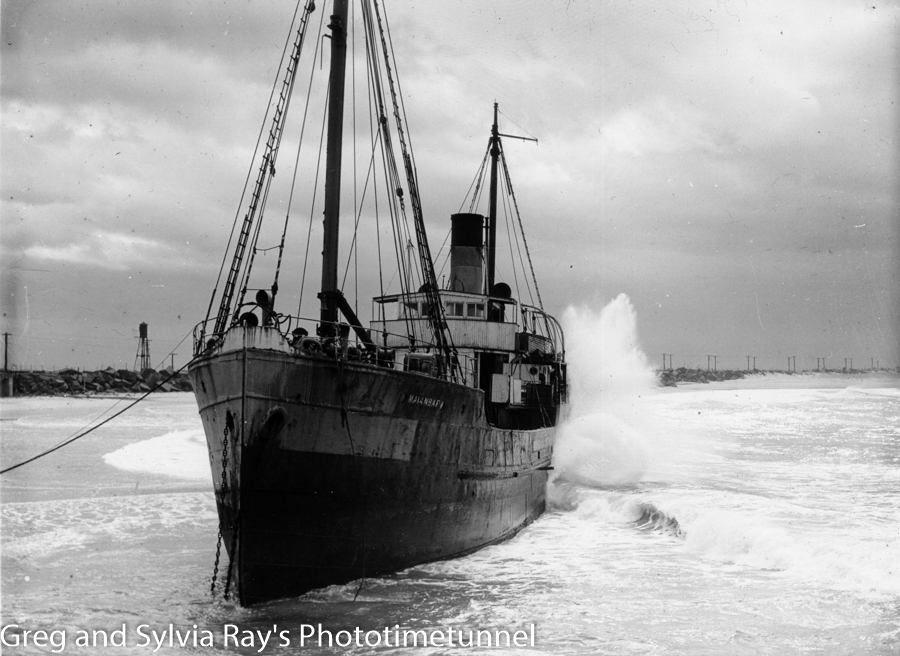 Long before the celebrated grounding of the Pasher Bulker in 2007, Nobbys Beach hosted another unexpected visitor which was, for its time, almost as popular a tourist attraction.

Considering that it was wartime when the unlucky Maianbar washed ashore on Nobbys, and that not as many people had access to cameras as in 2007, the 1940 grounding of this ship is a surprisingly common subject encountered in Novocastrian family photo albums of the era.

The TSS Maianbar had been built in Scotland in 1910 for the NSW northern rivers trade, using the recycled engine and boiler from an earlier wreck, the Minimbah. In 1920 the Maianbar was grounded at the mouth of the Macleay River and languished a month before being refloated and taken to Sydney to be lengthened and put back to work. On May 5, 1940, it was being towed to Sydney by the SS Arakoon when disaster struck. The towline broke and the ship ran aground on Nobbys at about 4pm. Hundreds of sightseers flocked in the rain to see the ship and take photos of the unaccustomed sight.

Efforts to refloat the Maianbar were futile, and as it sat on the beach, big sandbanks built up around it. The ship was auctioned on June 4, 1940, and quickly resold to some local businessmen for £700. Work on stripping out saleable parts was slow, however, and by late 1941 Newcastle Council and the NSW Government were arguing over who was responsible for dealing with the remaining wreck. It was dynamited in 1943, but pieces remained for decades after, presenting hazards to swimmers and surfers.

The Power House museum has an attractive model of the Maianbar which may be viewed at this link:

The end of HMAS Australia

Velocipedia: some ancestors of the bicycle