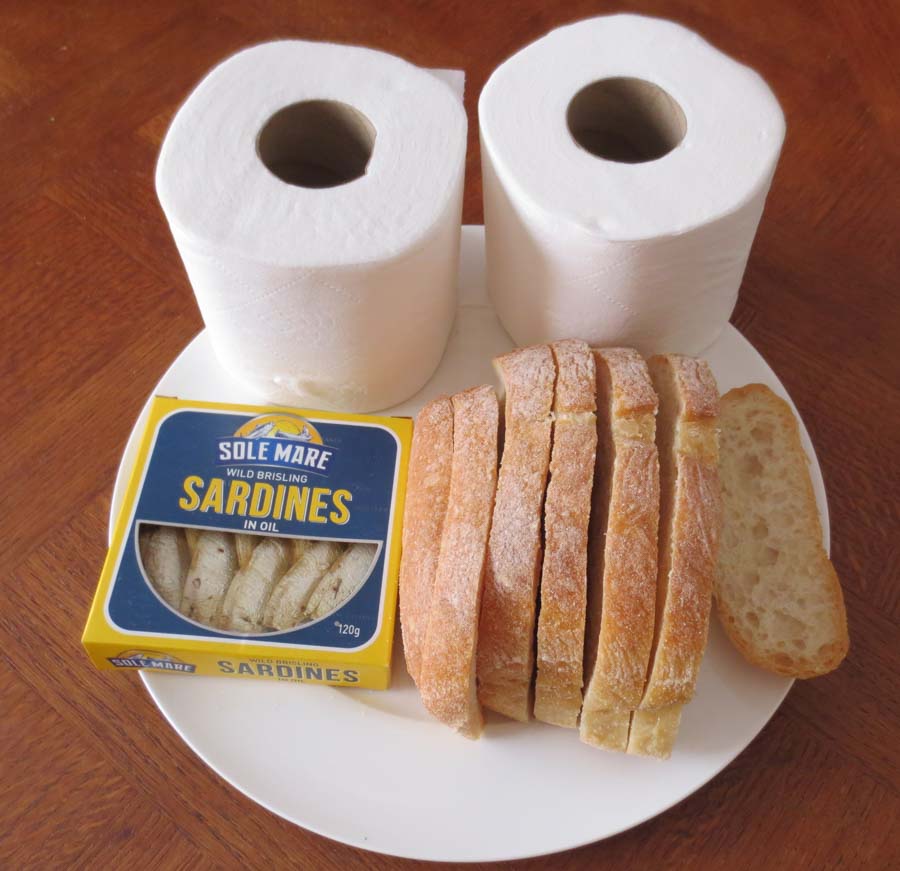 Australia’s ludicrous toilet-paper fiasco makes me think of two things. The first is a South Pacific cruise my family and I once went on. The other is the loaves and fishes story from the Christian New Testament.

As for the cruise, the reason it springs to mind is the behaviour of some of the passengers on the ship. To be honest, I knew how it was going to be before the ship even made it out of Sydney Harbour. The people on the upper deck, enjoying the spectacle of passing beneath the majestic arch of the great bridge, had located bottles and cans of beer and other drinks. Within half-an-hour, the deck was being criss-crossed by empty and not-quite-empty drink containers, rolling back and forth under our feet. It was a marvel of carelessness and lack of consideration that was made more marvellous by the fact that at least several people must have participated in making it happen. I presume it was left to the ship’s staff to clean up the mess. At any rate, the effect on my mood was instantaneous.

Next, I found it embarrassing and uncomfortable to watch the patronising way many passengers chose to treat the staff, almost all of whom came from Indonesia, the Philippines and some Pacific Islands, and all of whom tried hard to be obliging and friendly. Those we spoke to had interesting stories to tell of their lives. They spent long periods at sea, striving to earn the money they needed to support their families back home. They were dignified people, doing their best. But many of the passengers treated them as if they were nothing but servants. They spoke down to them, laughed at them behind their backs and begrudged offering a few dollars in tips to supplement the less-than-generous paypackets the staff were receiving for their labour.

Plenty of food, but hoarders took more than they needed

But the clincher came when we were ferried by small boat to an uninhabited island where we were to spend the day picnicking. It took a few trips to bring out all the passengers who wanted to snorkel in the clear water and sunbake on the sand. The staff provided a very generous supply of cans of soft-drink and salad buns wrapped in plastic film. There was more than enough for everybody. But many of the people who were earliest in line for the food didn’t just take what they needed. They demanded more, in case they got hungry later. The staff looked troubled, but didn’t dare refuse. The result was that the food ran out and those later in the line missed out. Those with stockpiles sat on their towels on the sand and refused to meet the eyes of those they had unnecessarily deprived. It was a very souring experience, made worse by the fact that many of the passengers chose also to leave their used plastic wrappers on the sand where they blew around and created a big job for the staff and for those sympathetic passengers who helped clean up.

I came away from that cruise feeling very depressed about our society and the selfishness, shallowness and lack of consideration I saw exhibited in the microcosm of the ship. But it was the day of the salad buns that affected me the most. Even at such close quarters with their fellows, some passengers were determined that they should have more than their fair share, though that meant others among their immediate neighbours would have nothing. It was the loaves and fishes story in reverse, I thought.

Loaves and fishes, in reverse and re-imagined

The loaves and fishes story has a special meaning to me: one that I know most devout Christians will strongly disapprove of. In the gospel telling, Jesus finds himself with a big audience to feed and he miraculously generates enough bread and fish from the small amount on hand to satisfy the hunger of all present. I’m willing to accept the gospel story. I’m not afraid of miracles. But I’ve imagined another version where Christ instructs his disciples to go among the 5000 people present, asking all of those who have brought food with them to make it available to share with everybody. And I imagine that, when the resources of all are put together, there is ample for all and nobody needs to go hungry. I’m comfortable with both versions of the story, but in my imagining the miracle isn’t solely due to the external agency of godly power. Instead, the power of the miracle comes from the engine of sharing (or of love, as Jesus might have said).

I’m not saying that short-sighted antisocial selfishness is a strictly Australian characteristic. Far from it. I don’t even think it is unique to humans. Feeding dogs, cats or chickens in groups will bring it out. Maybe the fundamental laws of the universe as they apply to energy, matter and life are ultimately responsible. But we can – and often do – transcend selfishness by act of will, and I suspect our future as a race will ultimately depend on our ability to exactly that.

Hoarding toilet paper is ludicrous and contemptible, but as a visible symptom of an underlying malaise that afflicts our society, it points to something worse.

Time to wake up, Australia