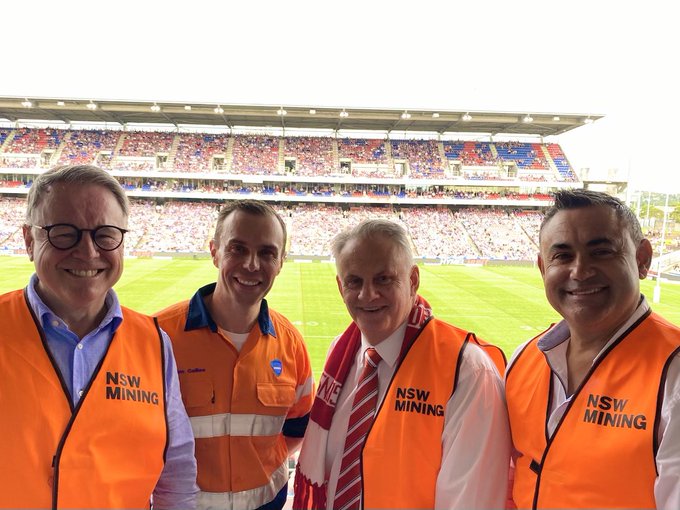 The photo tells you much about the coal industry in NSW. A bunch of political bottom-feeders in uniform for the fading but still wealthy King Coal.

You’ve got old mate Fitzy on the left, still in shock from nearly losing his seat at the most recent election. The nominally Labor Member for the federal seat of Hunter wants to blame everybody but himself, and perhaps figures if he cosies up to King Coal and gets himself on the op-ed writing roster for Mr Murdoch’s media stable he might be able to future-proof his career prospects.

Then there’s the omnipresent CEO of the NSW Minerals Council, the politically well-connected and tireless advocate for King Coal, Stephen Galilee.

Next we have Fitzy’s former close pal and one-time leader of the Federal Labor opposition, Mark Latham. Mr Latham is now NSW leader of Pauline Hanson’s One Nation Party, which recently shocked many of its members by voting in favour of Coalition laws specifically designed to harm contract mine workers and benefit mining corporations. The vote shouldn’t have surprised anybody. One Nation is probably every bit as interested in having rich and powerful friends as are the Coalition and Labor. And in Australia few are as powerful as King Coal. Given the way One Nation can leverage its small voting base to sway national policy on race and immigration, it would be a natural ally for an industry seeking to shore up support for its sunset years. Interestingly, the One Nation candidate who gave Fitzy such a fright, Stuart Bonds, roundly criticised his party for its betrayal of people in favour of big corporations. The party promptly sacked him, evidently because he isn’t willing to suck up to King Coal at the cost of his strongly held personal beliefs.

Finally there’s NSW Nationals leader and deputy premier John Barilaro. Back from a spell of mental health leave late last year, Mr Barilaro has shrugged off controversy surrounding his business activities and a rather mean lampoon video by Friendlyjordies to put on the uniform for King Coal.

Of course, there’s a by-election coming up for the seat of Upper Hunter, recently vacated by the National Party’s Michael Johnsen, who was exposed for sending sexually explicit text messages to a prostitute while attending question time in State Parliament. He has also been accused of raping a prostitute, and voters are waiting to see what becomes of these allegations, which Mr Johnsen has denied. Mr Bonds initially ruled out running in Upper Hunter and one imagines that One Nation and the Nationals – parties with much in common it seems – will be discussing the best approach to tackling the by-election. Now that Mr Bonds has been sacked by King Coal’s One Nation Party it will be interesting to see if he runs as an independent. The best result for NSW would be – in my opinion – for Mr Latham to quit his Legislative Council seat, contest Upper Hunter and lose. I presume King Coal would disagree with that opinion, but then I hardly ever agree with the mighty King on any topic at all.

As for the King himself, he is currently seeking approval for projects totalling the equivalent of 10 Adani-sized pits in the Upper Hunter, with a combined output of 98 million tonnes a year. That’s according to a new report by the Australia Institute. Exactly why he wants these permissions is a bit mysterious, since a number of his existing mines are running well under capacity and the Port of Newcastle hasn’t got enough loading capability to handle the extra tonnage proposed. In an oversupplied market the higher-cost mines go out of business. The higher-cost mines are often those that employ the most people, so that means a net loss of jobs, instead of the bulldust employment bonanza the King and his robot minions are programmed to promise. Think I’m wrong? Why then, is BHP trying to flog off its Mount Arthur mine – currently producing well under capacity – and why has it revised the value of the mine down from $US1.2billion to a lousy $US300million?

But in NSW the King calls the shots, so much so that former Liberal Prime Minister Malcolm Turnbull – who has owned grazing land in the Upper Hunter for years – had to be sacked from his newly announced job as chair of the so-called “Net Zero Emissions and Clean Energy Board” of NSW for stating the commonsense view that a moratorium on new mines in the Hunter would be a good idea. Out comes the King, on cue, claiming again that he cares about jobs and implying he has some kind of social conscience. Which is why he is such a model employer, right? Which is why he does such a great job of looking after the environment and rehabilitating former mine sites?

The fact is, Australia’s export coal industry is run by huge corporations who care about dollars and nothing else. They will be perfectly happy to leave the Hunter with all the dirty holes in the ground, the ruined farmland, the wrecked rivers and aquifers and economies crippled for decades into the post-coal future. Do your own cost-benefit analysis and tell me whether you really think the tremendous and permanent costs to our communities are outweighed by huge profits for tax-dodging multinationals and a relative handful of grudgingly paid wage bills.

But why bother telling these truths? The circle-jerkers have already won. Here come the zombie mines. Thanks for nothing, King Coal.

How to destroy an economy and create a recession: a beginner’s guide

More about midazolam: not a pretty picture