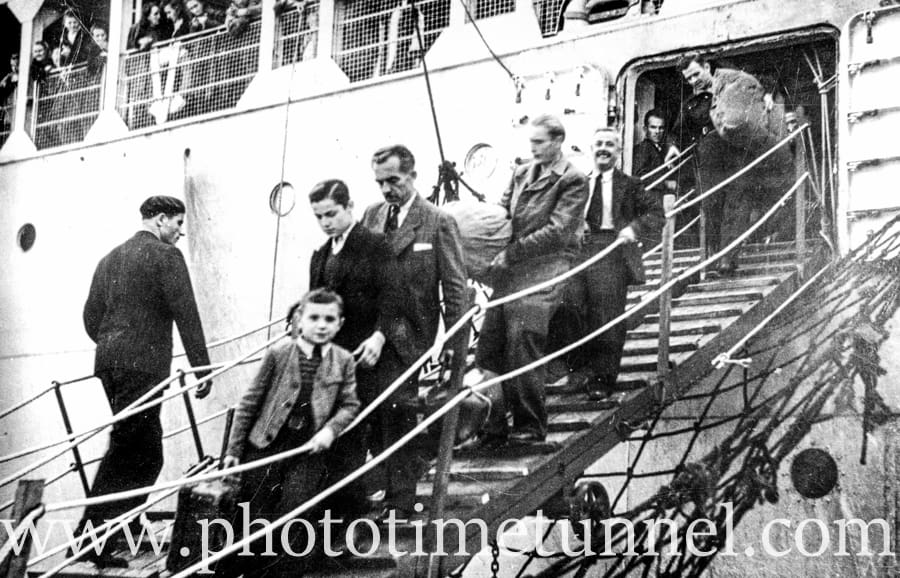 Eastern European migrants arrive in Newcastle NSW on the Fairsea, 1949.

During World War II Australia’s industrial infrastructure received an impressive boost, as the nation fought to make itself defensible against Japan and to become as self-sufficient as it could. Much of this capacity remained after the war, and for some decades Australian industry flourished, creating jobs and putting healthy paypackets into the pockets of the working middle classes.

There was so much work, in fact, that Australia reached out to Europe – much of it still struggling with postwar reconstruction and deep poverty – for more potential workers and citizens. Still unwilling to let go of its White Australia tradition, the nation saw Europeans as a tolerable alternative to the still-preferred Britons.
Newcastle’s heavy industries were keen for these new workers, and the BHP steelworks, in particular, offered life-changing opportunities to people fleeing the poverty and problems of the Old World. From many parts of Europe, in waves over a number of years, came people from many countries, all bringing their own customs, cuisines, languages and cultures.

The liner Fairsea famously brought migrants to Newcastle in 1949. Over the next several years the ship carried several groups to Australia, and was noted in its earlier voyages for the spartan nature of its accommodation. Most passengers were housed in large dormitories with cramped, triple-decked bunks.

One postwar migrant was the late Horst Griep, who has left a fascinating photographic record of his family’s journey from Germany to Australia. Horst was born in East Germany and his first job was at the Agfa camera factory. During World War II he helped operate anti-aircraft guns protecting the factory until the Allied bombers started flying too high for the guns to reach. He was sent to Berlin, where he was when the war ended. After the war’s end he swam the Spree River to surrender to US troops rather than the Russians and he soon got a job doing aerial photography for the British.

In the early 1950s Horst, his wife Ursula and son Jorg, came to Australia on the MS Skaubryn, (link to more information) disembarking at Sydney and travelling by train to Greta. Horst was quick to get a three-year contract job at BHP and after he won a prize in a photographic competition he came to the attention of management who asked him to take many photos around the plant. Horst and his family operated a small poultry farm at Kearsley and Horst did some photographic work for the Cessnock Eagle newspaper.

The journey to a new life in a new country

When Newcastle went with Jayes