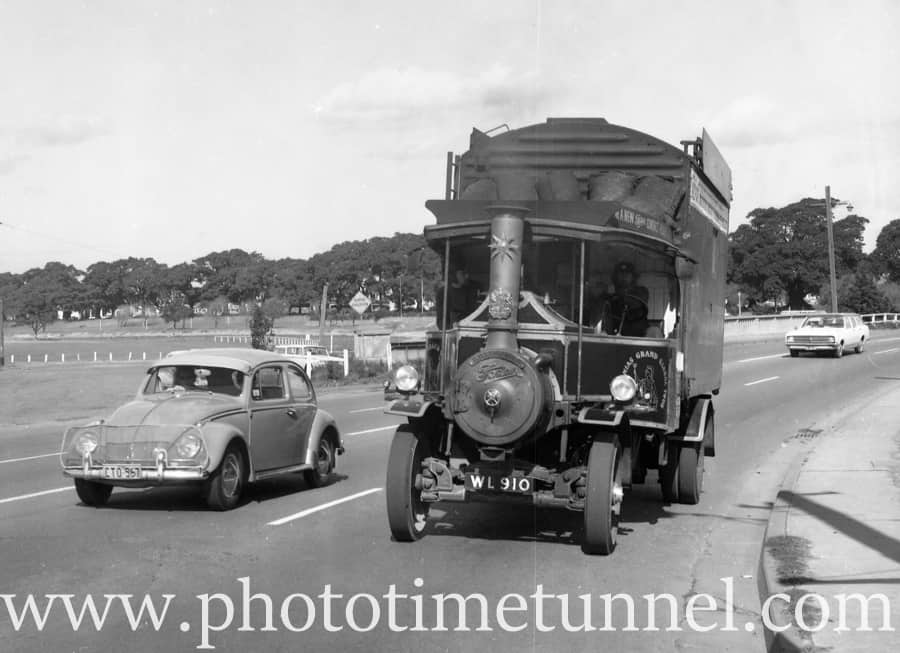 A “trackless train” and a steam lorry made compelling subjects for Australian photographers when they visited the country during world tours at opposite ends of last century.

Among a number of interesting photographs in one collection of glass negatives we were privileged to borrow was this oddity: a strange train-shaped truck outside J.A. Goldthorpe’s garage in Auburn, Sydney. A little research discovered that this was the famous “trackless train” owned by MGM film studios, which came to Australia in 1928 as part of a world tour promoting MGM films.

The vehicle was built by Harry O. McGee of Indianapolis, USA, in 1924, as a promotional device for a new auto painting company. He made a number of examples, one of which was bought by MGM in 1925. It was basically a train-shaped truck that ran on petrol, but produced a smoky steam substitute using a system that dripped oil onto the exhaust manifold.

MGM brought the vehicle to Australia in 1928, not long after the opening of its Ben Hur silent epic. By the time the trackless train arrived in Australia it had already toured North and South America, the British Isles, Russia, Scandinavia and parts of Europe.

In 1971 a different oddity arrived in Australia as part of another world tour. Journalist Michael List Brain brought his restored 1926 Foden steam lorry to Australia, as part of an extensive global itinerary. The trip was sponsored by various commercial interests, and the truck stopped at shopping centres as part of its promotional program.

In Newcastle it was shown at Kotara shopping centre, but many amateur photographers snapped it as it made its smoky way around the suburbs of the city before making its way up the North Coast of NSW. Britannia later suffered a major breakdown in Melbourne, and it was reported that a Newcastle firm was involved in the extensive repair job.

Evidently the vehicle was repaired. It is now on display in the Steam Museum at Preston Court in England.

Click here to see a video of Britannia about to set off on her journey.

Clangers. Some of my printed errors.