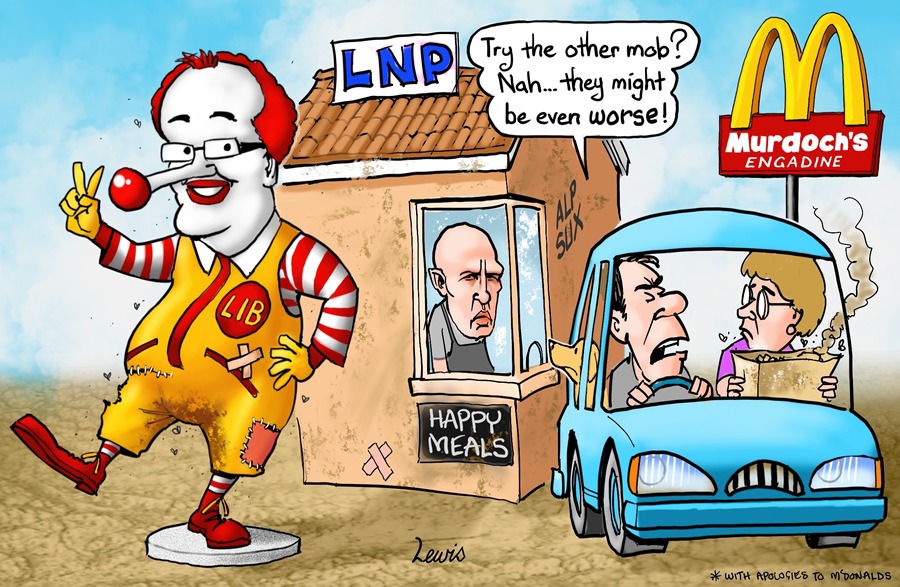 Thanks to Peter Lewis for this hilarious toon. Apologies to Mackas.

The funny part about this Australian federal election is that so many people say they are going to vote for the incumbent Coalition parties even though they agree they have done a bad job for their past two terms in power.

When I ask some of them why, the answer is confusing but seems to be that they are afraid Labor might be even worse.

The other funny part about this election is that so many people – nice, sensible people mostly – tell me they really believe the Coalition has done a good job. They are completely oblivious to the tsunami of scandal, corruption and undermining of democracy that I believe has occurred under the Morrison Government or, alternatively, they think all those scandals are just made-up stories. Perhaps significantly, many of those people also think climate change is fake, Covid is fake and the Murdoch family’s news outlets are honest and fair.

In a perverse kind of way I half-understand the first group – the ones who fear Labor might be even worse. Because it is theoretically possible. Albo might turn out to be worse than a fake-religious lying incompetent dope and his cabinet might turn out to be worse than a toffee-nosed clique of nasties whose whole idea of serving Australia has been to shovel cash at their mates and cronies; to lie, cheat, steal, mislead Parliament at will, strip the public service, flog public assets and treat voters with contempt. I can’t say it isn’t possible. No doubt a Labor government would suffer from some of that. I say that with certainty, looking at some of the line-up on the ALP bench.

Also, Albo might only last a little while before some of his more horrible factional enemies (we know who they are) bring him down with some manipulated “internal polling” and install themselves in power, which is very much a Labor thing.

But realistically, it’s hard for me to imagine Labor could really be worse than the Coalition has been under Morrison’s leadership. Think about it. Think about Christian Porter and his desperately incompetent court shenanigans. Think about Peter Dutton. Barnaby Joyce. Angus Taylor and his wonderful water works. Michaela Cash. Think about Robodebt. The Indue card. The Barrier Reef Authority. The Covid task force of gas industry mates. Ruby Princess. Alan Tudge. Stuart Robert. The rorts. The scams. The lies. The waste of money.

So the question is, should this roomful of sleazy clowns be rewarded with another term at the trough? Should they be invited back for another encore of daylight robbery? On the sole basis that we are afraid Labor might be worse?

I can tell you one thing will be worse under Labor, and that’s the press coverage from Murdoch’s empire of spin, from the broken shells of once-proud newspapers now owned by Peter-Costello-chaired Nine and from the other billionaire playthings we call our mainstream media. Where Scomo got off “Scott-free” again and again with free passes from the corporate media for his constant hopelessness, any Labor leader will be smashed on a daily basis for any misdeed or mistake – real and imaginary – that the wholly-owned hacks of the press can find or dream up. Even if a Labor leader does a total sell-out to corporate interests – as we have sometimes seen them do – that will only buy them temporary and conditional respite from the media bashing.

And yes, this predictable and practically scripted media smashing will be tiring and depressing because the corporate propaganda outlets are so dominant that it’s hard to avoid their ranting and sly insinuations.

Maybe some people take that reality on board when they vote in Australian federal elections. That the relentless daily propaganda becomes such an unpleasant part of the background to our lives that it’s almost better to vote in the Murdoch-approved clown circus again, just to have a quiet life. Where government stuff-ups are ignored or applauded as works of genius and life can go on peacefully with the steady transfer of all our assets and wealth upwards to the billionaires who run the show. We can tell ourselves it’s inevitable, and the media will agree.

And as we go broke and our society breaks down around us we will be able to console ourselves that it might have been worse under Labor.

Stop trying to think outside the square: a presentation for young journalists

Ask no questions, get told no lies