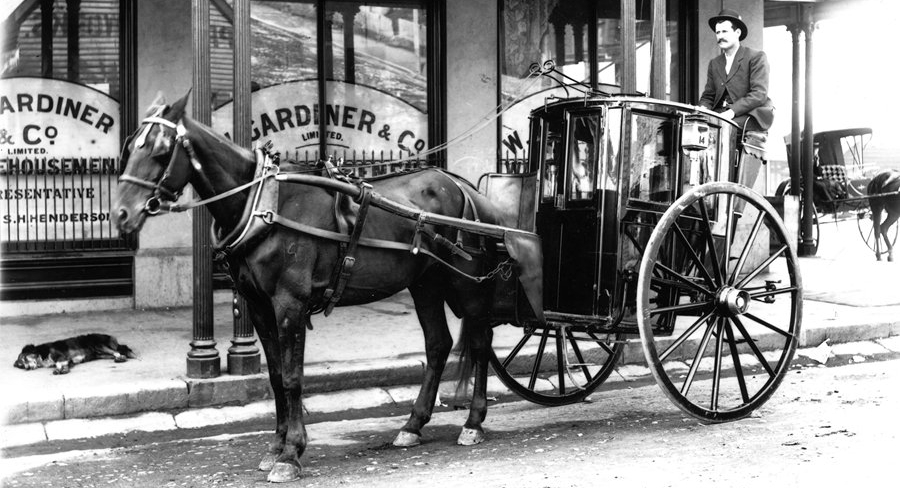 Hansom cab on the corner of King and Perkins Streets, Newcastle. Photo by Ralph Snowball.

At first hearing, in the 21st Century, you might imagine that “hansom cab” is a name for a pleasant-looking taxi. In fact, hansom cabs were the horse-drawn forerunners of more modern motorised taxis, and in the mid to late 1800s and early 1900s, the presence of hansom cabs in your city or town was a good sign of civilisation.

Where did the name come from? Well, “cab” just meant “cabrioloet”, which was a type of carriage designed to be pulled by a single horse. It usually had a retractable roof, making it a convertible. Some modern car makes have brought back the term “cabriolet” for the convertibles in their ranges. The “hansom” part came from its designer, Joseph Hansom of York. Hansom’s design became very popular in crowded pre-motor car cities on account of its relative safety, speed and manoeuvrability. A hansom cab could squeeze through narrow spaces and get you places bigger vehicles couldn’t when traffic was heavy – which it could be. That made them perfect urban hire vehicles, and “cabbies” soon became a feature of many busy cities and towns. In a hansom, you could fit two passengers under cover, while the driver perched up behind, exposed to the weather. You could talk to him, and pay him, through a little hatch door. Later models became much more enclosed, with glass windows and greater protection from the elements for passengers.

According to transport enthusiast, the late Ken Magor, Newcastle is believed to have got its first hansom cabs in 1868, courtesy of Mr Joseph Hollinshead who operated two cabs in Hunter Street. In November 1968 the first hansom was built in the northern part of the state as the Newcastle Chronicle observed:

“We have had the pleasure of inspecting this very creditable piece of workmanship at the establishment of Mr George Cordy, coachbuilder and wheelwright, of Hunter Street. It was made to the order of  Mr John Robinson. The vehicle appears equal in every respect to similar vehicles made in larger Sydney establishments. It is elegantly finished and presents a very smart and dashing appearance. The hood – technically termed a ‘social hood’ – is a very pretty shape, surpassing in that respect any of the cabs now running in Newcastle. The vehicle was thrown open for public inspection and the cost was stated to be from £90 to £100.”

Hansom cabs operated in Newcastle well after cars and motor taxicabs appeared, and the last one was said to have been retired in June 1932 when cabbie Dick Probert exchanged Teddy, his horse-partner of 17 years, for a motor car.

Some reminiscences of hansom cab days appeared in an article by Leo Butler in The Newcastle Herald of March 5, 1960. Former cabbie Walter Scott recollected waiting at the cab rank outside Newcastle Post Office:

“You’d sit on the cab at the back, with the rain pelting down over you, over the cab and over the horse. The gas lamps would glow on the wet road. It was lonely, miserable and unprofitable. We used to get a shilling from the railway station right up to The Hill. You’d be dressed in oilskins, with the water pouring about you, just sitting there without moving, like a monkey. There was no talking. There was no-one to talk to except the horse.” “We used to drive all sorts of people. For example I picked up a skipper once who had his ship at the Dyke. There were sailormen all around Newcastle in those days and we were busy with the ships. This skipper, of course, was pretty full. I took him out to the ship at Carrington bridge where there had been a big storm which had blown down the telegraph wires. the old skipper had to crawl through those wires to get back on to his ship to get some more money to spend in the pubs. Anyhow, he gets stuck in the middle of those wires, couldn’t get in or out. I had to go and help him through back to his ship where his money was, back through the wires and back to his pub. Laugh!”

Mr Scott said his father, Edward Scott, used to hire horses as well as cabs, and many skippers used to take horses for a day in the country. The livery stables were in Watt Street, “opposite Reid’s”. He said he had driven hansom cabs since he was 14 – as soon as he could get permission.

“In those days you couldn’t get up to the top of Hunter Street as you can now. Watt Street was the farthest you could go because the rest was a sand paddock. I’ve sat on my cab at that stand at Newcastle Post Office for many a year. There was a barber shop opposite as I remember, and in this barber shop there used to be a parrot. This parrot used to sing out just like somebody hailing a cab – ‘Hi Cabby!’ – and many a time I myself have rushed over, horse and cab, to people on Hunter Street corner because they hailed me. And all the time it was the dashed parrot.”