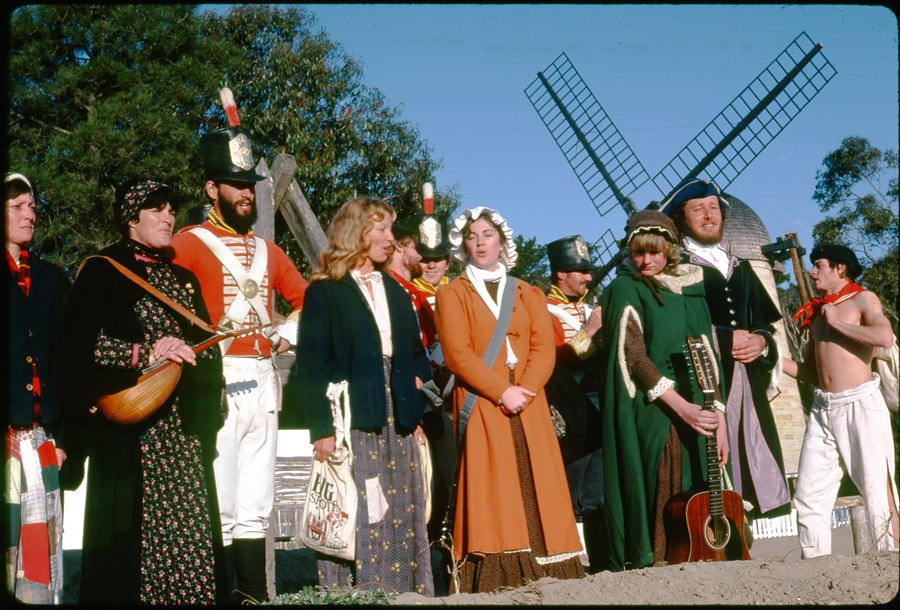 During almost 30 years of operation, the historical theme park Old Sydney Town, near Gosford on the NSW Central Coast, attracted millions of visitors. Intended as a reconstruction of the Sydney in the very early 1800s, it was a remarkably faithful replica with many authentic touches. The park was the brainchild of architect Frank Fox, who bought the 110ha site because of its apparent resemblance to the landforms of early Sydney Cove. Set out along the lines of James Meehan’s 1803 map, the park boasted more than 30 buildings, painstakingly built using colonial methods.

The attention to historical detail at Old Sydney Town was surprising. This recording of a talk given by the park’s research director, Bob Irvine, some time before the project began gives some inkling of its roots.

Old Sydney Town was opened by then Prime Minister Gough Whitlam on Australia Day 1975 and closed in 2003. While open it supported a large cast of staff and offered a variety of themed activities reflecting the early days of the convict settlement. It lost money – heavily – but was supported by initial federal government funding until this was withdrawn by the conservative government of Malcolm Fraser.

Its popularity can be gauged by how often snapshots of the park turn up in collections of family photos.

I visited Old Sydney Town once, and have no photos of my own. My memories are of the period-costumed actors who staffed the park, playing the parts of soldiers, convicts, priests, schoolmasters and artisans. I recall a disturbing song, sung by a wandering female convict, about a baby being stabbed with a pen-knife. My only souvenirs are the rude notes that the “schoolmaster” handed out, in his peculiar way, to my wife and I. When he wasn’t holding a class – insulting his pupils with names like “Little Johnny No-Brain” and suchlike – the schoolmaster was wandering around the park. From time to time he would walk up to visitors and hand them little folded slips of paper, as pictured below. He was certainly a character.

In recent years there has been some talk of re-opening Old Sydney Town, albeit as part of a major tourist-residential development. It is by no means certain, however, that this would result in the park resuming in anything like its former guise.

Newcastle’s Obelisk and “the social evil”