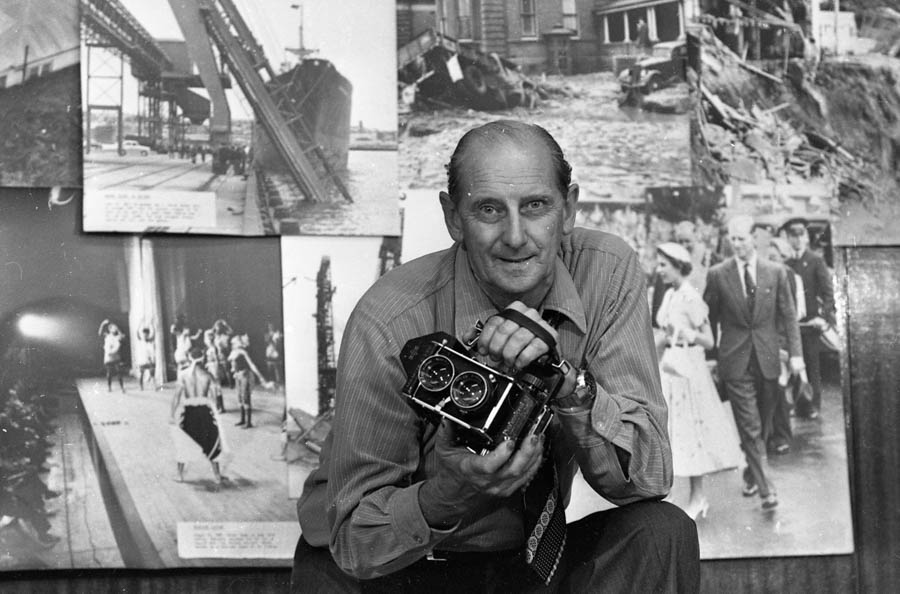 Among numerous fine photographers to be employed over many decades by the Herald and Sun daily newspapers in Newcastle, NSW, the name of Milton Merrilees stands out among the best. An extremely dedicated newsman and a passionate photographer, Merrilees was popular with workmates and the public alike, establishing a reputation as a gentlemanly but tenacious photo-journalist.

He began working as a cadet photographer in 1937 and was pictorial editor for the Herald and the Sun when he retired in 1979. With a career that spanned the years of World War 2 he saw tremendous changes in Australian and Hunter Region life and society and produced an immense body of work punctuated by some wonderful gems of press photography.

He was also an extremely keen collector of vintage cameras and, after his death in 1982, his children donated this important collection of 128 cameras to Newcastle City Council, which passed it on to the city’s regional museum when this was established. For some time a portion of the collection was incorporated in a display at the museum, when it was located in the old brewery building in Hunter Street West.

Milton Jack Merrilees was born in Carrington in 1916 to a devout Methodist family. He remained attached to Methodism and Christianity all his life. He originally trained as a marine engineer and was a qualified fitter and turner. According to family tradition a friend asked 21-year-old Merrilees to accompany him to an interview for a job as a press photographer. The friend was aware of Merrilees’ great interest in photography and thought his knowledge would be helpful in the interview. The story goes that the friend failed to get the job, but Merrilees was called back and offered a start as a cadet.

When he started his cadetship in 1937, the effects of The Great Depression were still painfully evident. Most newspapers were not especially pictorial, and the state-of-the-art camera gear at that time was big, heavy and cumbersome. The Newcastle Sun (afternoon) and Newcastle Morning Herald (morning) had united under one ownership umbrella, but still operated as competitors in many respects. In the early 1930s (up to about 1934) the newspaper photographers were still shooting on glass negatives of quarter plate size, and the switch to film involved the same sized negatives, exposed in the same cameras but with different backs.

Photographers in those days had to travel to news jobs by pushbike or public transport. Few people had cars, and travelling to news jobs in the suburbs could be a major exercise. Film was expensive too, and the newspaper management directed photographers to economise, expecting them to produce high-quality shots from just one or two exposed negatives. Bylines for published work were unheard of, so distinguishing one photographer’s work from that of another is difficult and often impossible. In 1945 Merrilees became head photographer at The Newcastle Sun, and he “moonlighted” as a semi-official police photographer too, taking photos of crime scenes for police as well as for press purposes. In 1971 he was appointed pictorial editor for the Herald and Sun.

With a deep interest in optics, Merrilees experimented with lenses, with microscopy, and with unusual photographic techniques. In 1967 he and some colleagues created a huge print by aiming an enlarger down a lift shaft at the Herald building, creating a celebrated outsize aerial image of the city of Newcastle. He also taught aspects of photography at local colleges and was a frequent speaker at public and church events, usually presenting interesting slideshows of images from his newspaper work.

Bushland find a missing link for a vintage car project