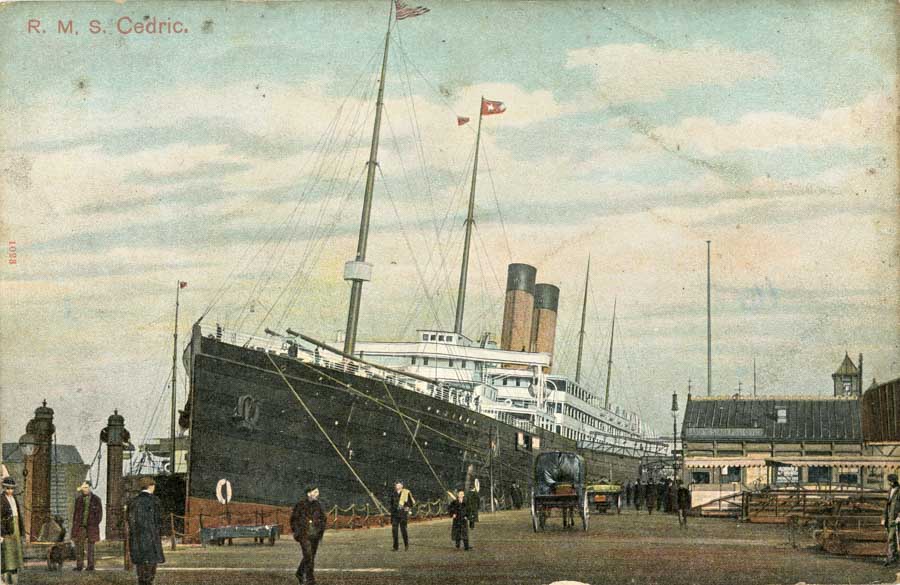 Back in the early years of the 20th Century, in the golden age of postcards, untold thousands of cards criss-crossed the world, carrying necessarily brief greetings between friends and loved ones. They were cheap to send, easily available, and keenly collected – especially by youngsters. Today these old cards still hold some fascination. Sometimes they are interesting because of the illustrations on the front, other times for the inscriptions on the back, and sometimes for both.

This card is a “real photo” card, produced by Charleston Studios in Newcastle. Real photo cards are simply photographic prints on postcard blanks, and people often ordered their own postcards from their photographers. This example shows a proud country mother with her triplets.

XXXXXXXXXXXXXXXX for the children. Dear Louie, Just a card to let you know that we are all well, hoping you are the same. Ellen and Nora have got their new dresses & tub hats for the winter. This is the triplets & their photos are all the same. Yours sincerely, Wally XXXXXXXXXXXXXX

This couple has been snapped aboard the Wilcannia, which did some trips between Adelaide and London, via the Cape, between 1910 and 1912.

Dear Sis, Pleased to say we are only one day from London. We are well in the English Channel now. We have had a glorious trip over; not one bad day yet & we have been three-and-a-half weeks coming from Africa and oh my, how glad we shall be to get off and get a decent meal. I shall write and let you know how we like London. We will have been over a month there by the time you get this. We were a big success in Africa; liked it very much. Hope to do a return there some day. Hope you are all well. Fond love to the children & to all at home. Love from Ida and Harry.

I’ve no idea what the writer of this postcard had in mind. Shocking!!

This card has been written to an artillery officer in Sydney from a friend who appears to be part of a garrison on one of the islands north of Australia. I think it’s Thursday Island.

Dear Jack, Things are fair up here at present. Half the garrison is down with fever. The hospital is crowded; no more room. Swads [?] are taking their own beds and clothing when they go to hospital. I hope you like the little girls on the other side. Write and let me know all the latest news. F.A. Lillibridge.

Here’s another card with a Pacific flavour, from a flustered mother in Suva, Fiji.

Dear Mr Warner, It is my turn, I know, but baby has been very ill for 3 months and I am wheeling him while I write this. I cannot leave him for a minute. He has had not got over dengue fever but has had his head covered with fearful boils and now on his body. It is a horrible time. I was very sorry to hear your baby had been ill. I do hope you are much stronger. We hope to be home in the early part of August. Best love to Beryl and yourself. Your loving friend, M. Homer.

This card is from a young man to his father, describing a recent flood in Tamworth, NSW.

Dear Father, I am sending you this PC of the flood. All the photos were taken when the flood was nearly down. It does not look much here: if they could have taken them about 4 o’clock in the morning they would have shown something like it so people could realise what it was like. Uncle and I have good sport up here, fishing and shooting. Well Dad, this is all the news this time, from your ever-loving son Walter.

This card’s message is a little mysterious. Lovers? Friends? The card itself is a typical mass-produced German picture-card of the time. The Germans had printing down to a fine art, and their cards were often very attractive.

M. Quite forgot till I had gone. Now don’t forget will you: there’s a dear. I want to know every particular. I am looking forward to a letter from you tomorrow. Have quite made up my mind to come over. Goodbye, Love from Ada.

When people sang together