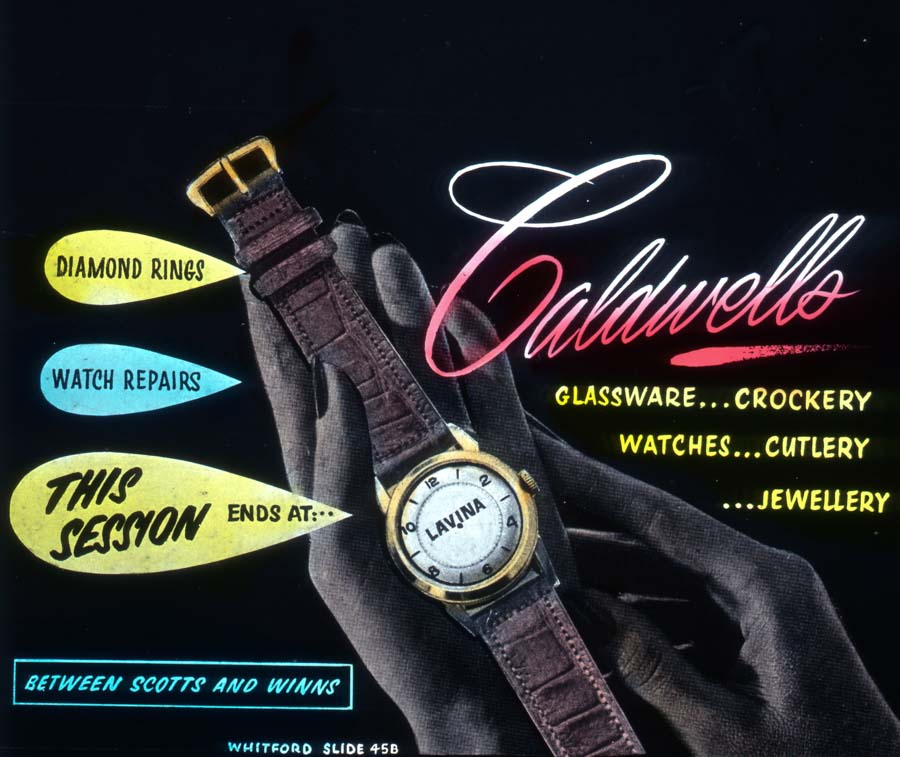 WHEN Geoff Caldwell left Newcastle Boys High School in the 1930s, he told his father he wanted to be an engineer. His father laughed at the idea. “Dad told me I should just join the family business and help him run the jewellery store,” Geoff laughed. He took his father’s advice. The fledgling Caldwells jewellery business was launched at the end of the Great Depression years, survived World War II and went on to enjoy an extraordinary period of prosperity during the era when a prime location on thriving Hunter Street, Newcastle, was money in the bank. “We used to sell 300 diamond rings a year,” Geoff told me in 2012, shortly after his 90th birthday. “And that was in the days before the market was flooded with poorer quality diamonds.”

Caldwells was a name that ranked with the best in Australia for turnover and Geoff Caldwell  came to be feted by some of the great companies of the time. He was flown around the world by Omega and Seiko, celebrated at lavish dinners in Swiss mansions, received stunning gifts of pearl jewellery from grateful Japanese bosses at Mikimoto and was given hand-signed china pieces from Lord Wedgewood himself.

Thinking back to the day his father laughed off the idea of a career in engineering, Geoff mused: “My father made my life that day.” Caldwell’s father, George, got his own start in the jewellery business at the age of 14 with the Raysmiths firm. In 1919 George Caldwell became a manager for well-known Jewish Novocastrian businessman Jack Israel, who shared his knowledge with great kindness and generosity.

In 1935 Caldwell senior bought out Israel and started his own jewellers shop at the same address, later buying out competitor Green Brothers. A black marble mantle clock from Green Brothers stock was Geoff Caldwell’s first sale. “It was £185, heavily discounted, and I was so proud of selling that clock, all by myself,” he said.

As war clouds gathered the young would-be jeweller found himself in the militia, allegedly preparing to be a field engineer. “Early in the piece at Rutherford camp the senior officer was watching me trying to dig a trench and he asked me if I’d ever held a pick or shovel. I told him I hadn’t so he took the shovel off me and dug the trench himself.” A job was found for Geoff as transport corporal and soon he was promoted to quartermaster. Ironic, as he’d enlisted to be an engineer and ended up keeping an army store.

On active service in New Guinea as a sombre Christmas approached, Goeff was asked by his commanding officer whether the quartermaster could ask his jeweller father to supply some trinkets for the men in his unit to give their wives and sweethearts. “I wrote home and asked, but it was wartime and there wasn’t much stock,” he recalled. As a matter of fact, his father – having nursed his new business into its first year in the black – had suffered a breakdown when the government introduced an emergency tax that took 18 shillings and sixpence from every pound of profit. Still, his father put together a tray of pretty samples: compacts, pendants and the like. “When they arrived I was the most popular bloke in the unit,” Geoff said. He sent the orders home to Newcastle, along with the names and addresses of their recipients and laboriously written messages from the men. Many of them, country boys from north-western NSW, couldn’t read or write. As things turned out, one of the young ladies – sent a pendant by one of the other men in the unit – ended up becoming Mrs Marienne Caldwell when the war was over.

Geoff wiped away a tear when he remembered the homecoming to the family’s Hunter Street shop. “It was so emotional. Everybody was so worried in those days about their loved ones at war. It was a beautiful day.”

After the war it took some time for the country, and for Newcastle, to get back on its feet. But Caldwells had survived and was ready to rebuild on a firm footing. As money flowed back into the community, Hunter Street bounced back and was soon humming with as much vigour and energy as ever. There followed a period of Novocastrian prosperity and a time during which Hunter Street was the unrivalled monarch of regional retailing. In 1955 the Caldwells bought the big building on the corner of Hunter and Wolfe Streets with which the firm came to be identified for so many years. “We got Stronachs to remodel the shop, with angled display windows and lots of Mudgee marble. “Those were the days. It was the heyday of Hunter Street. The footpaths were packed so you could hardly move for people.”

In the 1970s Caldwells was selling its 300 diamond rings a year and topping that with about 500 high-quality watches. The biggest sale the firm ever made was during those years: a $78,000 four-carat diamond. It was a nail-biting transaction because at that time many buyers were starting to favour size over quality. “You could buy a lesser stone of 10 carats for the same money and, since we had a hard job to locate the high-quality four-carat stone in Antwerp, our importer was worried in case the sale didn’t complete.” It did. “In those days we would hardly sell anything less than an H-graded stone, but the demand for bigger gems led to many retailers dropping down the scale to Js and Ls. It’s a real pity but it seems to be what people want.”

Geoff’s mother, Margaret, was a Novocastrian legend who maintained her imposing presence in the shop until 1986, the year she turned 91. “She was a bit of a tartar, some people thought. If a man came into the shop in stubby shorts she’d tell him not to come back unless he was properly dressed.”

Caldwells earned a name that was respected across the globe. More than once its window displays were featured on the covers of international trade journals. Geoff recalled many highlights. He dined in a Swiss castle as an invited guest, celebrating the anniversary of the great watchmaking firm, Omega. He was driven in a luxury bus around Japan, visiting the rising factories of a country that would change the face of watchmaking forever. He warned Rolex to move to quartz movements; was told that would never happen, then watched it take place barely a year later. He helped Mikimoto get a foothold in the Australian market and benefited from the pearl company’s gratitude. He set up his own wholesaling firm so he could buy gold direct from the factories and warehouses of Europe.

In 1987 Caldwells sold their Hunter Street store to David Jones and also opened a franchise in Garden City, but by then the tide had turned and things were on the decline. Geoff and Marienne’s son David took over the reins but circumstances had altered for good and the firm couldn’t maintain its momentum. Today the name of the store is a memory, but for many Hunter people who trusted Caldwells to supply their heirlooms and treasures, it’s a beautiful memory.