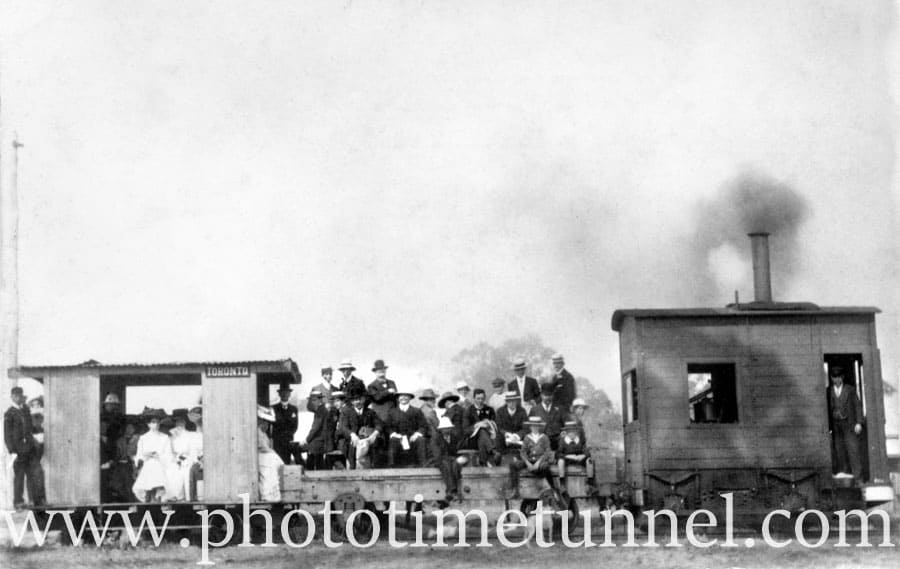 The Coffee Pot at Toronto.

It looked a lot like an old-fashioned outdoor toilet with wheels, with its weatherboard cladding and hopelessly unstreamlined shape. But the “Coffee Pot” was a remarkably serviceable little steam tram motor that functioned from 1899 to 1909 as a weekend picnic conveyance at Toronto and later as a coal-hauling engine at Howley’s Colliery at Merewether.

The Coffee Pot was built in Sydney by Hudson Brothers. It was originally owned by Thomas Saywell, owner of coal interests on the NSW South Coast. It was used on the Rockdale Tramway before being brought to Lake Macquarie by the Excelsior Land Company. It ran for a number of years largely as a weekend picnic service between Fassifern and Toronto. Excelsior had previously operated two heavier engines on the line, but these proved unsuitable and the company bought the Coffee Pot and another lighter engine called the Pigmy from Saywell.

Thomas Saywell was a fascinating character. He was born in Nottinghamshire, England, in 1837, and moved to Australia in 1948. In the 1860s he was a prosperous tobbacconist in Sydney, after which he branched out into coal and land investments. He developed the Zig-Zag company at Lithgow and also the South Bulli Colliery where in 1887 he built the Bellambi Jetty. Other South Coast mines he developed included Clfton and South Clifton.

Saywell invested in real estate south of Sydney and was granted a 30-year franchise to operate a tramway from Lady Robinsons Beach to Rockdale Railway Station. He named the new suburb Brighton-le-Sands. He was a director of the Wickham and Bullock Island Coal Company in the Hunter Region and in the copper mining industry at Cobar. He died at Mosman in 1928.

In 1910 the Coffee Pot was sold to Howley’s colliery at Merewether, and the motor was modified (the cabin was tapered at the top) to fit through the mine’s oceanfront tunnels.

The Coffee Pot wound up a derelict landmark at The Junction. The photograph below shows the wreck in 1947.

These photos were published in our book Travelling Through Time.

A nice potted history of the Coffee Pot and the service it was part of, written by Ken McCarthy, can be found by clicking here.