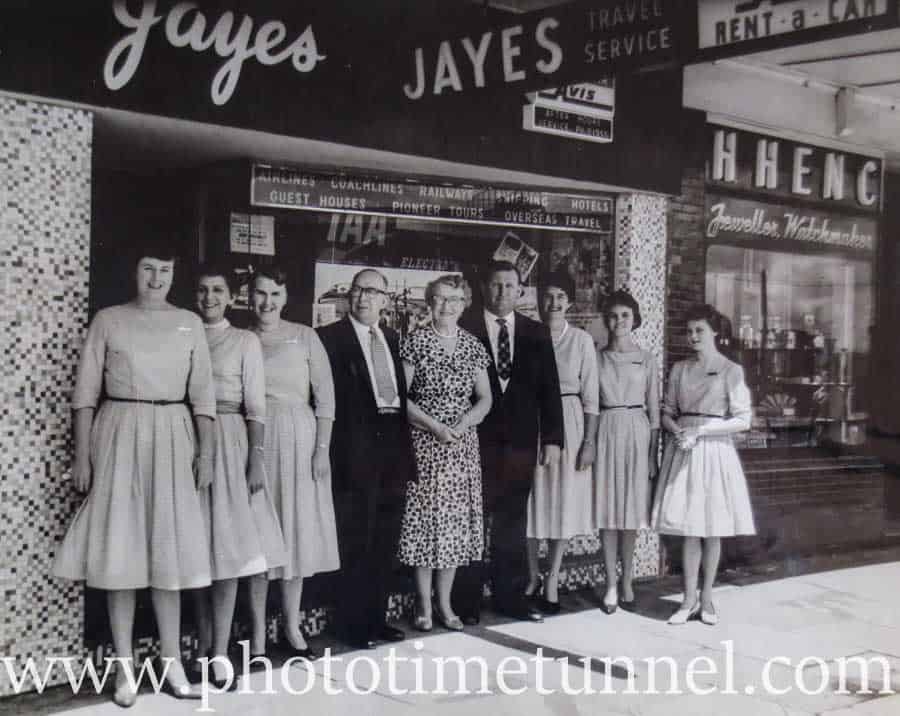 Jayes Travel Service was an iconic Newcastle business through a large part of the 20th century. The founders, John and Lottie Jenkins (pictured below), came to Newcastle in 1928, having emigrated from Scotland in 1920. Their first business in Newcastle was in accountancy and collections.

The Depression made business hard to come by, and Lottie started helping Katoomba guest houses find staff to run their operations, trading as Jayes Employment Agency.
John Jenkins had served in World War 1, but signed up again to fight in World War II. Lottie kept the business going while her husband was away, and when one of her Katoomba guest house clients suggested opening an accommodation booking office (many Hunter people had wartime weddings and rushed honeymoons in the Blue Mountains) the famous travel brand was born.

The first booking Lottie made was for a guest house at Port Macquarie. Early in 1942, she combined home and office by moving to 69 King Street (between Bolton and Newcomen Streets), and ran the business single-handed from the front of the house. Her main source of business was the honeymoon holiday for soldiers on leave, who wanted a quick marriage before returning to war. Holidays were very limited during these grim war days and no one was allowed to travel interstate. Katoomba was a favourite destination.

After the war the family built the fledgling firm, with son Jim joining (after being released from the Navy in 1946) and later taking ownership – with wife Beryl – in 1956.

The postwar era saw a big demand for coach tours because of the wartime restrictions that had limited travel and very few people owned cars. Jim saw the need for tours from Newcastle, but a lack of capital prevented the purchase of any coaches, so an agreement was made with Amos Fogg of Fogg’s Motor Service in 1947 for Jayes to organise tours and Foggs to provide the buses. However, Foggs was unable to get a Tourist Vehicle Licence, because ex-servicemen were given preference. Jim Jenkins successfully applied for a licence and sold it to Amos Fogg for one pound. This joint arrangement worked very successfully until the mid 50s when Amos died and the bus company was split up. Foggs sold the licence to the Entrance Red Bus Company. Following discussions between Jayes and the bus company in 1959 they started operating coach tours out of Newcastle and sent Roy Earl to Newcastle to organise them in conjunction with Jayes under the name of “Central Coast Coaches”.

So began a very long and successful relationship between Jim and Roy that would see many innovative ideas over the years. Eventually Jayes purchased the licence and tourist vehicle plates and changed the name to Jayes Coach Tours.

In the 1950s overseas travel was extremely expensive and out of reach of most Australians. In 1957 Jim and Beryl embarked on an “around the world tour” to discover what global tourism had to offer and also to make contacts with hoteliers and tour operators in overseas destinations. They departed for 70 days on a Super Constellation (prop aircraft) for Colombo on the first leg of a 30,000 mile journey visiting 17 different countries. The Newcastle Herald wrote in an article: “To keep within the luggage limit Mrs Jenkins is taking nylon frocks and interchangeable skirts and blouses. She is including one suite and a basic hat for all occasions”. This was truly a “big deal” at the time, and Jim and Beryl received a lot of publicity. Jim “wired” home a weekly update of his travels and discoveries. This was placed in the Newcastle Herald and Newcastle Sun as a paid advert under “Jayes Jottings”, which ran weekly for some 25 years.

This world tour set up Jayes as an innovative and progressive travel agency . Jim had made personal contacts all over the world, and was able to set up “personal itineraries” for those Novocastrians who now could afford the “once in a lifetime “overseas travel. His new travel contacts would personally meet and greet the Jayes customers, take them to their accommodation and take them on a local sightseeing tour. This was revolutionary for the time.

In the 1950s and early 60’s most overseas travel was by ship. P&O, Chandris, Sitmar Lines ruled the waves. The vast majority of these travellers were visiting the “old country”, being mainly Britain. Before Jayes could sell a ticket on either a cruise ship or airline it had to gain “accreditation” from the shipping company or airline. This was still a time of much formality and “stuffiness” in business. The shipping companies in particular were very powerful and were controlled by older businessmen in Europe. Jim spent many fruitless visits to Sydney knocking on doors trying to get someone in authority to speak to him about gaining accreditation.

After much persuasion some companies allowed Jayes to sell their products, but with no commission payment (the only income source for a travel agent), until it could be proven that Jayes was a credible business. With little choice Jayes sold shipping tickets all over the world without receiving one penny of income. This went on for some time before Jayes gained “accreditation” allowing it to sell tickets and receive commission for doing so.

The domestic or Australian Department was a frenetic hive of activity. Bus tickets by the hundreds were sold each day. Communication even to Sydney was very limited and very expensive. A call to a Sydney meant booking a “trunk” call with the PMG (Post Master Generals Dept.) and waiting until a line became available. For a busy booking office like Jayes, this was simply unworkable. Pioneer Bus Company linked all of Australia by bus routes, really the only economical way to travel. Air travel was still only a dream for the majority of Australians.

Jim organised with Pioneer a “free sale” booking system whereby Jayes could take bookings all day without contacting Pioneer. This was very revolutionary; as no control was in place for overselling a service, however Jim was very persuasive and of course he went on to prove that the system could work.

I can remember the 3 o’clock phone booking to Pioneer where one of the Jayes girls would then pass on all of the days bookings in one go, allowing Pioneer to update their booking sheets.Jayes soon went on to become the largest seller of Pioneer bus tickets in Australia. The Australian Travel Dept. on a Saturday morning was a sight to behold. Customers would queue at the front door before opening time and rush the front counter when the doors were opened at 9 o’clock. It was not uncommon for up to 50 customers being three-deep waiting to be served at the counter while the phone calls kept piling up at the switchboard. Jayes was always in the top 10 selling agents for Qantas, Ansett Airlines P&O, and many other travel companies. As Jayes was always competing against multinational companies and companies with outlets all over Australia, it was not a bad record for a privately owned Newcastle company.

In 1965 Jayes became a company and in 1966 it moved from its longtime Scott Street home to new premises in Hunter Street. Newcastle television station NBN bought 50 per cent of Jayes in 1973 and another 25 per cent in 1979. Jim Jenkins retired as general manager in 1985, with his son John Jnr taking over. While the company operated, its name was synonymous with travel in Newcastle.

A Jayes Travel still operates in Newcastle, but this is an unrelated business.

No girls, people with disabilities or sons of miners need apply: bad old days of banking in NSW