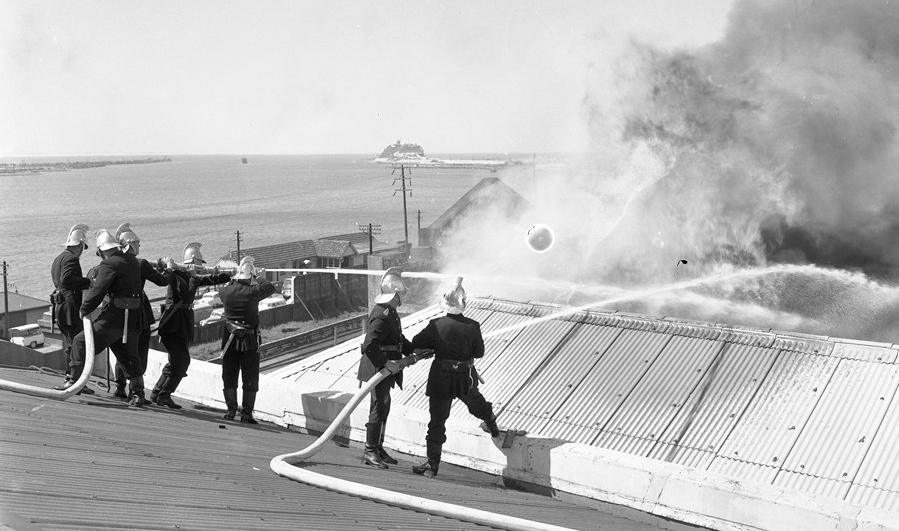 Goldsmith’s shoe store had been a landmark business in Newcastle, NSW, for decades before a fatal fire in September 1961 dreadfully seared the name into local consciousness. The fire cost three lives – a woman and two of her children. At the time of the fire Ron Morrison was operating his photo agency in Newcastle, and his series of images captures the drama of the firefighting effort.

Goldsmith’s traced its beginnings in Newcastle to December 13, 1897, when Bristol-born Frank Goldsmith first set up a shoe store in Hunter Street. The business thrived, and in 1915 the firm invested in a major redevelopment of its site at 146 Hunter Street. The redeveloped store had large frontages to both Hunter and Scott Street.

Mr Goldsmith died in England in January 1942, aged 76. He spent 60 years of his life in Australia, though he travelled widely. I know little of him, other than the small details in this obituary, indicating that he enjoyed rowing and rock fishing.

The weather in Newcastle on September 25, 1961, was extremely hot. The newspaper said the previous day had been the hottest September day for eight years.

Mrs Challis Audrey Scully, 31, had gone to meet her husband, who worked as a manufacturer’s agent with her father in a showroom-office in one of the two floors above the shoe store. Her husband had left a key at the shoe store for her to collect so she could let herself into his office and wait for him. She was accompanied by two of the couple’s four children – Mary Margaret, aged four, and Louise, aged two. Their other daughter, six-year-old Catherine, was already at school and nine-month-old William was with relatives. According to press reports, the plan had been for Mr Scully to drive his wife and daughters home to Lambton. Fate, however, intervened tragically.

When Mr Scully and his father-in-law, David Gavin, turned up at about midday, the store was ablaze. Firemen were fighting to contain the inferno, crowds of onlookers were gathered around and ambulances were taking injured people to hospital. Several people had escaped from the upper-storey offices by breaking windows and jumping onto the awning that overhung Hunter Street. These people accounted for most of the injuries. The two men approached authorities and were told that everybody had been evacuated. But when their search for the woman and two little girls among the crowd on the street was unsuccessful, they told the police their fears. Another search was ordered when it was safe to make the attempt. To the horror of all, the bodies were found.

Fire brigades from Newcastle, Hamilton, Tighes Hill, Waratah, Carrington and Merewether attended the blaze, attacking from both Scott and Hunter Streets. According to fire brigade records: “On arrival at the scene firefighters discovered that the building’s three floors were well alight. Smoke belched from the entrance to Goldsmith’s on the ground floor, and, a combination of flames and smoke issued from the windows on the first and second floors. Newcastle’s motor was put to work in Scott Street, while the salvage was sent to Hunter Street to get a hydrant to work pending the arrival of Hamilton Brigade. Two lines of hoses were quickly operating from Newcastle’s motor, the first through a doorway that lead up a flight of stairs, and, the second through the window of the first floor. When Hamilton Station arrived, additional lines of hose were directed into the first floor of the building. At the same time No. 7 ladders were brought into action”.

Fire brigade records continue: “For those inside the building, the conventional means of escape had been cut off by the rapidity and fierceness of the fire, so people jumped from the windows in order to save their lives. On arrival at the fire scene Inspector Lucas was informed that a number of people had escaped the burning building by climbing through the first floor window onto the awning, and that several others had jumped from the second floor to the same awning, at a distance of 15 feet (4.5 meters). Nine of these people suffered burns to their face and bodies. Tragically, a mother and her two children, who were inside the first floor office at the time the fire started, were unable to escape in time”.

Hampered by the heat of the day and by 50km/h winds, the firefighters had a hazardous task – graphically illustrated in Ron Morrison’s photographs, some of which much have themselves been obtained under risky circumstances.

Wartime fears of a seaman’s daughter