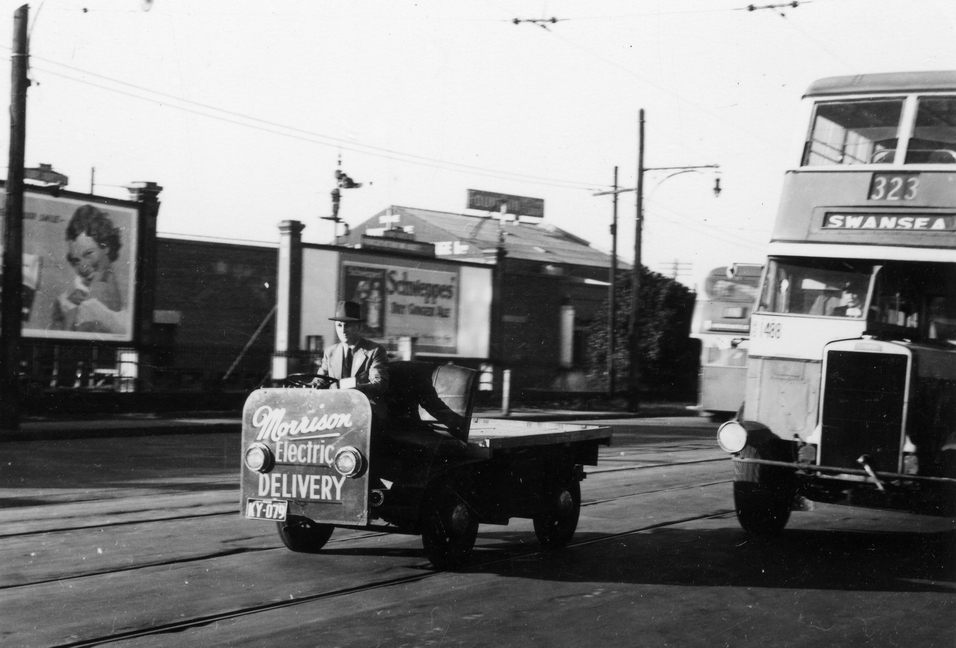 Scanning through some old photos of Newcastle, NSW, in the 1940s, I was surprised to discover an image of an electric delivery truck heading west on Hunter Street, alongside a hefty double-decker bus. The odd little vehicle was fitted with a table top back and it seems the truck wasn’t expected to travel fast enough to require a windscreen. Indeed, this example of a Morrison electric delivery vehicle was evidently a strictly fine weather proposition. The photo, collected by the late Ken Magor, was speculatively dated 1945, though I wonder if it might not have been taken a few years later than that, since the buses in the photo are no longer wearing their wartime camouflage livery. The presence of overhead power lines for trams dates the image no later than 1951, which is when the last electric tram ran in Newcastle.

It may be that the vehicle is being demonstrated as a sales promotion, given that its only signage identifies the manufacturer: the British firm Morrison-Electricar. The firm had its origin in the 1890s as a small engineering company, expanding into electric vehicles in 1933 after a chance discussion between the son of the firm’s founder and a baker during a game of golf. The prototype was a success and plenty of orders followed with six chassis types available by the mid-1930s. World War 2 drastically curtailed production and demand, neither of which recovered. The company changed hands and went through several mergers before finally disappearing in 1983, according to this Wikipedia article.

According to this 1948 article in The Cootamundra Herald – announcing the use of two of the vehicles to carry ice and meat – the vehicles were powered by five 12 volt batteries, had a top speed of about 18mph (less than 30km/h) and a range of 40 miles (about 65km). There are other references to these vehicles being used in Australia as early as 1934. This illustrated article in The Sydney Morning Herald shows a fully enclosed van version.

During World War 2 Australian authorities imposed tight controls on petrol, introducing rationing that lasted well after the war. Resourceful individuals and organisations that operated motorised transport found a variety of ways to stay on the road. Horse-drawn vehicles were still relatively common, and many of these were pressed back into service.

Other wartime emergency options included vintage steam trucks, rescued from the scrap yard and put back to work, and gas producer conversions, in which standard vehicles were modified to run on gas, which was carried in large bags on the roofs of the cars and trucks.