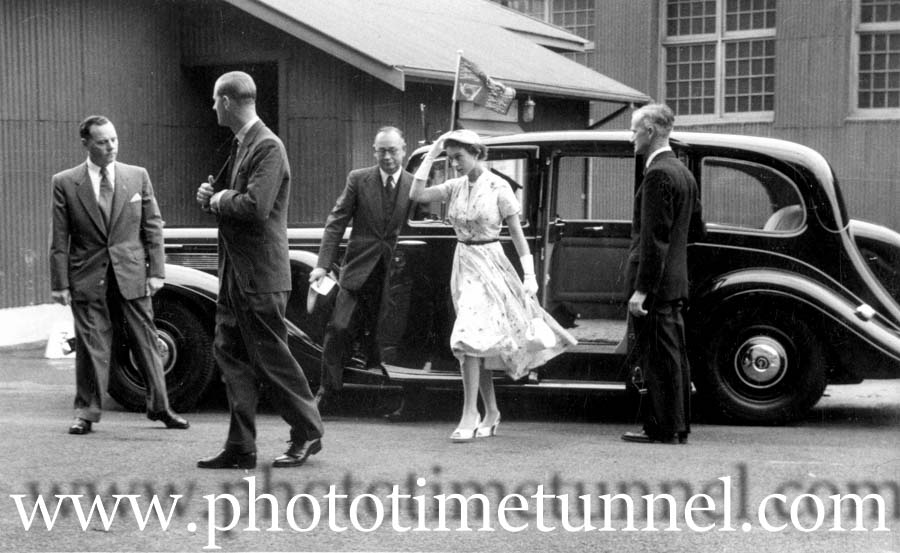 On Tuesday, February 9, 1954, the newly crowned Queen Elizabeth II visited Newcastle with her husband, Prince Philip. It was part of a nationwide tour – the first visit to Australia by a reigning monarch. The visit was characterised by an extraordinary outpouring of loyalty and enthusiasm by the Australian public. The royal couple arrived by train at Newcastle Railway Station at about 1pm, receiving a thunderous cheer as they passed through the red-carpeted station entrance to the royal car that waited on Scott Street. They travelled by motorcade to City Hall for a formal welcome and then to No. 1 Sports Ground and Newcastle Showground, enjoying the adulation of the crowds. About 35,000 schoolchildren formed a tableau at the showground.

According to newspaper reports at the time, more than 150,000 Novocastrians turned out to welcome the young queen, despite periods of sometimes heavy rain. One report observed that the Queen, with one eye on the rain and the other on the huge excited crowd, had her car’s top opened, prompting an appreciative roar from the spectators. In the afternoon the royal couple went to the BHP steelworks for an inspection before leaving by boat to Stockton. After that it was a trip by road to Williamtown for a 4.45pm departure to Evans Head and Lismore.

The RAAF VIP Dakota aircraft in which the royal party travelled was flown by Newcastle-born Squadron Leader John (Jack) Cornish (later Air Vice Marshal). A flight of four planes accompanied the party on a tightly timetabled and carefully rehearsed schedule. Jack Cornish was a highly experienced pilot, having flown during World War 2 and during the Berlin Airlift. Jack also had an administrative and security background, so was always guarded about comments on his time flying the Royal Family. He did, however, describe in an interview how Prince Philip – who was learning to fly – would appear in the cockpit and want to take a turn. He would then insist on occupying the co-pilot’s seat. Jack went so far as to mention that the Prince once made a mistake during a landing.

In Newcastle’s enthusiastic desire to make the most of the royal visit, the city attracted criticism from British correspondents travelling with the entourage. During the short stop in the city, Queen Elizabeth was required to “attend a civic reception where 80 citizens were presented, make two speeches, attend a gathering of ex-servicemen, see thousands of schoolchildren and visit a steelworks”. It was “undignified” and “sheer madness”, one correspondent wrote.

The BHP visit was photographed by Col Walker – then working for Joe Freeman and Bernard Snaps – as official photographer for BHP. During the royal visit to the steelworks, Col said, he was allowed freedom of movement while other photographers had to remain in designated boxes and be content with the pictures they could take from those limited angles.