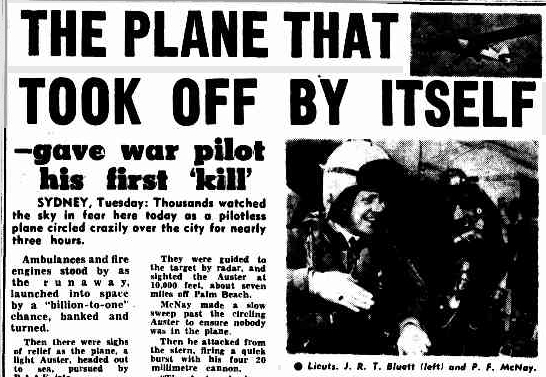 August 1955 was an eventful and tragic month at Sydney’s Bankstown Airport. On August 12 an Auster monoplane (VH-AAL) and a Tiger Moth biplane (VH- APF) collided about 100m from the ground as they came in to land at the airport, killing three men and injuring another. As they struck, the two light planes locked together and fell into thick scrub about 100m from Milperra Road. The Auster belonged to the Kingsford Smith Aviation Flying School and was piloted by 26-year-old instructor Jaroslav Kosner. He and his passenger, student pilot Edward Cowley, 45, were killed, as was the 35-year-old instructor in the Royal NSW Aero Club’s Tiger Moth, Eric Marsh. Amazingly, Marsh’s student in the Moth, David Lloyd Jones, 24, escaped with only minor injuries.

The second major incident happened on August 30. Another Auster (J/4 Archer VH-AET) – also belonging to the Kingsford Smith Aviation Flying School – was being flown by 30-year-old trainee pilot Anthony Thrower when it apparently had some engine trouble. Thrower landed the plane safely, then climbed out of the cockpit to restart the engine by spinning the propeller. To his horror, as the engine started the plane began to taxi along the runway and his efforts to grab a wing-strut were useless. He ran in the opposite direction to warn the control tower, but was again amazed when the plane turned and began to taxi after him. With a low weight, plenty of fuel and its wings trimmed to climb, the Auster actually took off.

Horrified observers saw the plane climb steadily in slow circles over the airport before it headed towards the centre of Sydney. According to press reports of the time, fire and emergency crews tried to follow the plane on the ground, in case it crashed into a populated area. A rumour also quickly caught hold that there may have been a child aboard. Radio announcers warned the public, and hundreds of people rushed into the streets to watch the drama.

What happened next was an amazing chase that involved a number of military aircraft trying to shoot down the errant Auster. First to follow was another Auster, operated by the Royal Australian Navy from its Nowra base, and piloted by Commander J. Groves. Groves shadowed the runaway for about an hour before his fuel ran low and he had to return to base. He may also have decided it might have been unwise to be in an Auster over Sydney when he heard the description being given to the RAAF pilots called to shoot the runaway down.

The first to attack was a veteran Wirraway fighter from Richmond air base, piloted by Wing Commander D. Beattie with Squadron Leader T. Janes in the back seat. Their plan was to shoot down the Auster – which by now was conveniently over the sea – using a Bren gun firing from an open cockpit. The attackers were instructed to wait until the target was further over the sea and by the time they were cleared to fire the Auster had climbed to about 3000m and the gunner’s hands were freezing to the gun. The few bursts he was able to fire had no noticeable effect. When the Wirraway’s fuel ran low it too had to break off the engagement, reportedly leaving a couple of unarmed Sabre jets to keep an eye on the runaway.

The next into the attack were two Meteor jet fighters from Williamtown RAAF base near Newcastle, piloted by Squadron Leaders M. Holdsworth and J. H. Flemming. One of the jets was armed, while the other had only cameras and was present as an observer. Again, the RAAF was frustrated, this time by the slowness of the target, which was flying slower than the stall speed of the jets. When the lead Meteor’s guns jammed the jets had to give up.

The Auster was still climbing and moving slowly north east. Next to attack were two naval aircraft, propeller-driven Hawker Sea Furies from Nowra, flown by British Royal Navy pilots Peter McNay and Bob Bluett. This time the attack was successful, with both pilots firing cannon shells into the Auster, which caught fire and fell into the sea off Broken Bay. It was 11.42am, and the runaway had been at large for more than three hours. The incident caused acute embarrassment for the RAAF and also for the Defence Minister, who had to explain why it had been so hard to shoot down an unarmed, slow, unmanned plane.

Ground crew back at Nowra painted yellow profiles of the Auster on the fuselages of the Sea Furies when they returned to base. It was a very bad month indeed for the Kingsford Smith Flying Service and its father-and-son founding directors, John T. Brown OBE and Peter Brown DFC. The two disastrous incidents must have a bad impact on their business.

A plastic scale model of the Sea Fury that shot down the Auster was made and sold.

Watch some interviews about the incident here.

An article about RAN aviation can be found on the navy website here.