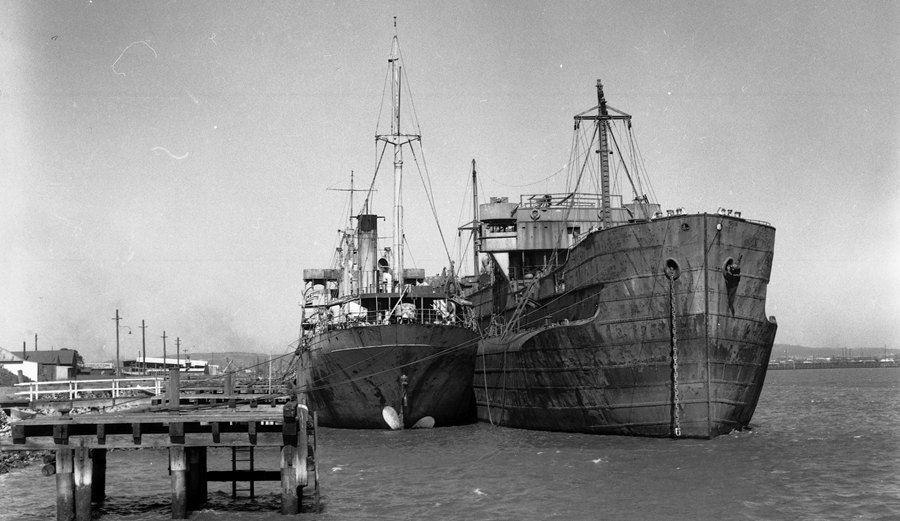 For some years after the end of World War II an ungainly hulk of a ship lay moored at Stockton, Newcastle, NSW. It was a battered old rustbucket that ended up in Newcastle as part of the postwar flotsam that drifted around the Pacific in the conflict’s confusing aftermath.

I’d seen photos of the ship lying there, and was often curious about its extremely odd shape. It’s hull was unlike other ships, with a huge bulging section down low, and I wondered what the reason was this peculiar form. In time I learned the ship’s name was Mokatam, and that it was a “turret deck ship”. Such ships have an interesting history. One of the key reasons they came into existence was that the operators of the Suez Canal used to charge fees based on deck area. A small deck sitting on top of a fat, bulging hull made the turret ships cost-effective when it came to canal fees and gave them an economic advantage over more conventional freighters. About 200 were built, almost all of them by one builder: William Doxford and Sons.

The Mokatam of Stockton fame was built by Doxfords in 1906 and was originally named Drumcondra. Just before World War I its Liverpool owners sold it to German buyers who renamed it Lubeck. After the war it was seized by the British and renamed S.E. Calvert. In the early 1920s it passed into Italian ownership, becoming the Aquitania and then the Mar Glauco. Under that name the ship sought refuge in the USA in December 1941 – with World War II underway. The Americans put the ship under the Panamanian flag, renamed it Mokatam and sent it off to the South West Pacific to carry war supplies.

Some reference to its war work is contained in the diary of merchant seaman Walter Rignold Marshall, who served aboard the Mokatam in 1943-44. Part of this diary can be found online, thanks to Walter’s daughter, Sue Simmonds. Walter describes signing in 1943 – when he was aged 42 – to work for the Americans, who were:

. . . marshaling anything that would float to carry supplies. Ships that had been laid up in Rotten Row for years were requisitioned. The Americans were in need of ex merchant seamen and advertised for them. I went to Millers Point and offered my services. I signed a contract as a civilian employee of the United States Army Transportation Corps and was soon on my way to Milne Bay via Townsville.

The morning we arrived in Milne Bay all hell broke loose. The Japanese were to make their last air raid on the Bay and, there being a lot of shipping there, they sent, some say, one hundred bombers. I did not stop to count them as we were too busy with the fifty calibre machine guns.

After numerous adventures Walter and his friend Roy Sherringham were offered berths on the Mokatam, which was lying in Milne Bay, deeply laden with war materials.

She was a very old turret ship of about 8000 tons, and, on her voyage from San Francisco her engine had broken down hopelessly. She had been towed into Milne Bay, and lay at anchor waiting to be towed to wherever her cargo was required. It seemed I was never to get away from towing or being towed. However, in the days of steam it was good experience.

I had a comfortable cabin, bed linen, the services of a steward and cabin boy, and ate like a human being as the food was excellent. I also had a full crew of reasonably good seamen and a large ship and gun crew (army), a sandbagged bridge which bristled with 50 calibre machine guns, plus 75mm anti-submarine guns on the poop. I had so little to do that at times I actually became bored, but I always remembered that old saying “never look a gift horse in the mouth”.

At last a powerful deep water tug, the Arkansas Falls, came to tow us to Oro Bay, where we expected to join a convoy for Finchshaven. Arriving at Oro Bay we anchored for the night and on arising at 7am there were ships everywhere. We hove our anchor, had our towline aboard, and as the various ships took their place in the convoy we, being a towed ship, were led into place at the end. There were some twenty vessels in the convoy of all shapes and sizes. The destroyers, corvettes, and MTBs took their places in front, astern, and both flanks.

Daylight revealed two ships missing from the convoy. They had slipped out at either Salamaua or Lae during the night. At 8.30 am we left the convoy, entered Dreger Harbour, and anchored in the lee of an island to wait further orders, “Ducks” alongside us began to unload some of our war materials. The Dutch hospital ship Maetsuyker, registered in Curacao, came in from the north and unloaded casualties, and Karoola came from the south loaded with Australian troops and headed north. We were now about nine miles south of Finschaven, where our troops had only just landed and heavy fighting was going on, particularly at Mt Sattel, which is directly behind Finschaven.

We were informed we were to go over to Cape Gloucester with the rest of our cargo, as the gasoline (in 44 gallon drums) was urgently needed there. Cape Gloucester is on the western end of New Britain, whilst Rabaul (with the Japanese in occupation) is on the north eastern end. Cape Gloucester was bombarded by American and Australian naval ships (about a week before we arrived), and softened up, and the American army was then in possession. It was from there they began a drive to re-take Rabaul. We went from Dreger Harbour to Cape Gloucester under cover of darkness, anchored in Dampier Strait, and started unloading feverishly into “ducks”. Never did I see winches and falls take such a thrashing as they did from the soldier longshoremen.

We finished unloading and loaded a few thousand forty four gallon drums. We had been there twenty four days when loading ceased and a tug arrived to tow us back to Milne Bay. On arrival I saw the personnel officer and asked to be paid off, as it was now seven months I had been in the combat area and I needed a break. Request was granted and I was paid off by mutual consent. I lived in a tent onshore until my travel orders came through. It was then October 1944.

According to one account, Mokatam “eventually turned up as a storeship at the Allied base of Morotai in the North Moluccas. There damaged by Japanese bombing, she was towed to Sydney, where her refitting as a storeship was completed just in time for the end of WWII. Pending ideas for her disposal, in January 1946 she was taken to Newcastle and laid up alongside the Omaha. Observing that further commercial service was unlikely, the local firm of Messrs R. Cunningham and H. Sutherland entered negotiations with the United States government to buy the ship for scrapping. The initiative was stymied when ownership was transferred back to the Italian Government. However, once an Italian Consulate had opened in Newcastle in the latter half of 1949, negotiations were resumed and quickly concluded”.

The same account continues: “Demolition began in December 1949 when a gang of four men set to cutting up, piling the dismantled sections into the hull. On 30 March 1950, the hulk was towed around to BHP’s No. 5 Berth where about a thousand tons of scrap were lifted out. A press photo shows her as a very strange sight with most of the turret cut away down to the main body of the hull, leaving just the foremast, a stovepipe funnel and a few ragged sections of superstructure. It was thought that the remains would be scuttled off Newcastle in the ship’s graveyard, but her fate was to be less conventional. Early in 1950 BHP had arranged a land swap, exchanging 317 acres of hilly bushland at Shortland, now the campus of the University of Newcastle, for 248 acres of Platts Channel, the remains of an old river arm that had been closed off when the steelworks had been built. The intention was to close the entrance of the channel in line with the South Arm of the Hunter River and then gradually backfill with steelworks waste. Someone had the bright idea that the hulk of the Mokatam could be sunk as a blockship. After being cut down to the tank tops, in mid-August she was moved to a bridge where magnets were positioned to lift out the balance of several hundred tons of scrap. On 16 August, the hulk was handed over lightship to the BHP and Public Works Department tugs towed her from the BHP berth to the entrance to Platts Channel, where two locomotive cranes dragged her onto the mudbank. When the channel had been filled right out, the hulk was further cut down and the bottom plates buried behind the former John Lysaght rolling mill”.

A gallery of Christmas postcards