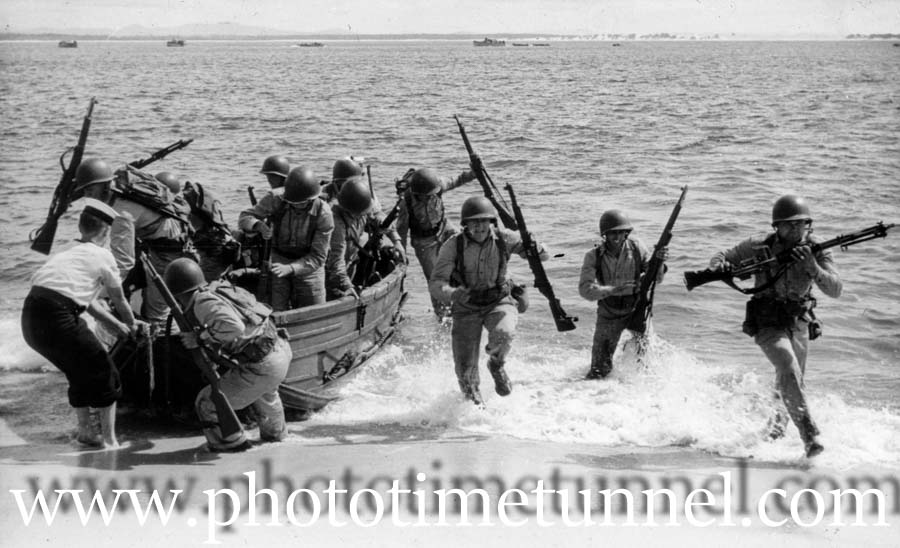 At the peak of the Allied Pacific campaign in World War 2, more than 14,000 American and British troops were based in the Shoal Bay area of Port Stephens. Shoal Bay’s famous country club was requisitioned to become a headquarters for part of the amphibious warfare training area known as JOOTS (Joint Overseas Operations Training Services).
The Royal Australian Navy called its training establishment HMAS Assault, and the ships HMAS Westralia, HMAS Manoora, HMAS Kanimbla and USS Henry T. Allen were frequently in the port, along with more than 130 other vessels of varying sizes. The Westralia (a commandeered civilian vessel) was used as temporary accommodation until shore facilities were built. After that the ship ferried troops north to advanced bases from which they set out on their combat assignments.

While it took some time to create the training infrastructure, with shore camps dotted all around the bay, it wasn’t long before the Allied command decided it made more sense to move most of the training closer to the fighting action.
It has been estimated that about 2,000 allied troops a month passed through the training centre until it closed in October 1943. The troops learned the skills they would need to mount landings from amphibious craft. They made actual landings at such peaceful places as Zenith, Wreck and Box beaches.

It was necessary to fortify the area in case of attack, and by the end of 1942 Fort Tomaree boasted a pair of six-inch guns, torpedo tubes and various other armaments as part of this effort.

Today Tomaree Headland still contains the remains of numerous fortifications, buildings and other remnants of the period. The military invasion hastened the development of Port Stephens, bringing as it did sealed roads, electric power and a proper water supply. These remained to benefit the area long after the war ended.

From our book, Recovered Memories.

A Wikipedia article about some of the fortifications at Port Stephens can be read here: