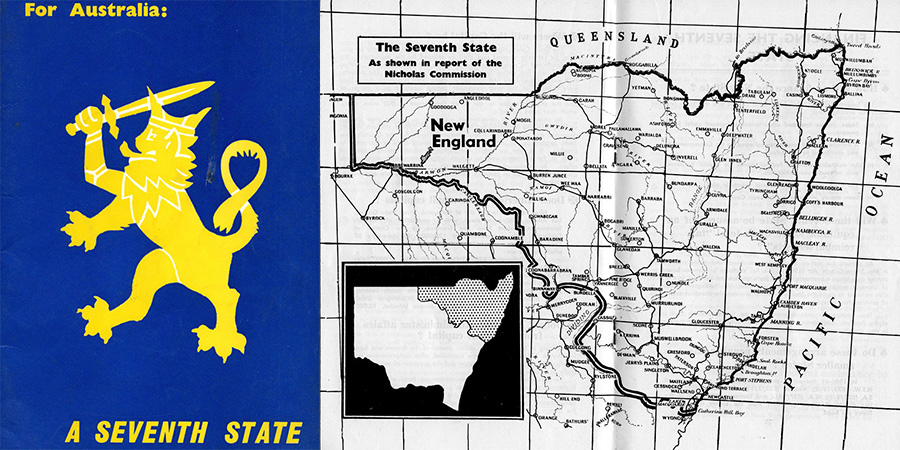 The biggest mistake Newcastle ever made was in 1967 when its voters helped kill the idea of Northern NSW seceding from the Sydney-dominated south.

After decades of agitation and a huge push, the so-called “Northern Separation Movement” had managed to force a formal referendum on the issue. People in the north of the state had brought the issue up repeatedly from the time that Queensland split from NSW. Their complaint was and has always been the same: that the Sydney-based government extracts far more from regional areas than it puts back, that government expenditure across all portfolios in regional areas falls massively short of a fair per capita allocation and people in regional areas have almost no say in the running of NSW.

Unfortunately for anybody living north of the Hawkesbury River, the enormous effort involved in getting the question of a new state put to a referendum in 1967 came to zero, mostly because of Newcastle.

According to my admittedly limited reading on the subject, Liberal Premier Robert Askin was genuinely frightened that the proposal would succeed. If Northern NSW had split from Sydney’s control the southern capital would have lost a large amount of income. Big capital cities all over the world tend to be vampiric in that they draw people and wealth from surrounding regions, concentrating political power in relatively small geographic centres. This leads to disproportionate efforts by governments to curry favour with voters in those centres, which often implies the disenfranchisement and pauperisation of those who live in outlying areas.

Newcastle in 1967 was prey to intense propaganda aimed at defeating the new state referendum. With its own concentrated population centre (much smaller than Sydney but big enough to tip the scales against the rest of the north) it was ripe for a scare campaign by both the major political parties. Newcastle would be better off with the devil it knew, was the thrust of the argument and sadly that argument won the day. Labor and Liberal alike strove to persuade Newcastle to vote against its own interests. The referendum was lost, with 54 per cent voting against secession.

During my time working as a journalist in Newcastle from 1984 to 2015 I often wished that the dead and hard-taxing hand of the Sydney-based government could somehow be removed. Again and again the appalling injustice of the system was brought home to me. In editorials and columns I didn’t argue for secession – although I think it would be ideal. Instead I tried to promote the idea of a charter of budget equity, under which governments would be obliged to spend money fairly across the entire state, based at least partly on population.

At one point the Newcastle Chamber of Commerce was brave and independent enough to commission a study of government spending in its area of operation. In a region with about 10 per cent of the state’s population, the proportion of spending across every government portfolio was typically only a few per cent of the state total, often less. That’s police, education, health and hospitals, arts and everything else. When it came to finding ways to rip off regions and funnel funds into the capital, the state government was endlessly creative and determined.

When I started work as a journalist the Hunter Region had its own independent and locally run electricity supply authorities. They were very well run by locally accountable boards of management, employed hundreds of people, maintained high-quality and reliable services and gave great value for money – especially considering the pay-packets of the employees were spent in the local area. The same was true of the water supply authority. Hundreds of jobs building and maintaining high-quality assets, local accountability, transparent decision-making and all the other benefits I outlined above.

The state government raided these once-great local public authorities, privatising and “corporatizing”, forcing the payment of absurd dividends and tax-equivalent payments to the sole vampire shareholder in the southern capital. Jobs destroyed and money ripped out of the region – funnelled towards buying votes in the metropolitan electorates that mattered to the politicians. It’s tens of millions of dollars, basically stolen in my opinion.

They have smashed local autonomy wherever it was to be found. Hospital boards were wrecked and replaced by bureaucrats on contracts directly answerable to Sydney, with gags tied tightly around their mouths. Same with transport, education and everything else they’ve been able to centralise and silence.

In the Hunter successive state governments of both colours have been on asset selling rampages, flogging off land, buildings and anything that wasn’t bolted down. In Newcastle the government created a special board to facilitate the development of former state land, bypassing normal local government planning controls and minimising local input. This authority has to sell to survive, and sell it does.

Local government in regional areas gets a raw deal. Not only does the Sydney-based department of local government actively suppress the level of rates that councils can charge. It also finds ways to shift responsibility for former state functions onto those same councils, with little or no funding to support these shrugged off jobs.

The state government flatly refuses in many cases to fund services in regional areas that it lavishly supports in the capital. The arts portfolio is a glaring example. Regional art galleries and museums get practically none of the hundreds of millions of dollars reserved each year in state budgets to support such facilities. Almost every cent is spent in Sydney.

Anything Newcastle gets from the government comes with strings attached. Want a new hospital? No problem. It will be underdone, under-funded and inadequate. In return for providing this, we will flog off the prime real estate the old hospital stood on and pocket the cash.

When it wanted to flog off the Port of Newcastle it was worried it had no social licence for something so extreme so it promised to spend a fraction of the sale proceeds in Newcastle. That sounds like an amazing concession by usual standards, but wait, there’s more. Much of the money went to build a short piece of light rail, from Wickham to the East End, which is of course run by a private operator. Building this piece of light rail enabled the Government to do what it had wanted to do for many years: close the heavy rail line and sell the land it was built on for development. The rail corridor, you see, is one of the few bits of land in inner Newcastle that isn’t undermined by historical coal shafts, so it’s especially desirable from a development point of view.

The government lies, blatantly, directly and without remorse, especially when it is committing robbery. It lied repeatedly about having no intention to sell the heavy rail corridor or to have development occur on it. Total and proven lie. It lied when it claimed that the contracts to sell the ports of NSW didn’t have secret clauses that would penalise the buyers of the Port of Newcastle if they attempted to seriously compete with the buyers of Sydney and Port Kembla. Lies, lies, lies and not the slightest trace of shame when they were eventually proven to have lied over and over and over again.

They lied when they said the privatised bus service would work better than it had in public ownership. What a laugh. The buses weren’t great before, after years of de-funding, but they are shocking now.

The Government scams Newcastle all the time when it creates pools of project funding for which local councils may apply. A pool of funds may be labelled “metropolitan” and if Newcastle applies it’s “Sorry, but for the purposes of these funds Newcastle is defined as regional”. But when a pool of funds is set up for “regional” councils then guess what? Newcastle is defined as metropolitan. Only Western Sydney routinely fits whatever category is required because . . . votes.

Two recent stories in The Newcastle Herald are what have set me off on this rant. One of them relates to a typical piece of state theft known as the “waste levy”. Allegedly designed to reduce the amount of waste going to landfill, this levy of $151.60 per tonne of landfill waste (Haha, Newcastle has to pay the metropolitan rate which is nearly double the regional rate) goes straight to Sydney where the Government promises it will be spent on worthy things. According to the article Newcastle’s annual payment to Sydney for the privilege of burying waste in landfill is currently $37million. The generous thieves in Macquarie Street have sent back a princely $175,000 of that levy to support resource recovery projects in the local government area.

The next story to set me off was a complaint by the chairman of Newcastle’s show committee, Peter Evans, that the Government is trying to score brownie points by promising to redevelop the showground, while playing down the reality that it wants to fund this by flogging off chunks of the land for residential development. Here we go again. We will give you a redeveloped showground with some kind of whizz-bang entertainment facility, but you have to pay for it by giving up public land for the benefit of developers.

I might add that I was also triggered by a column in the same paper by Western Sydney academic Phil O’Neill warning that the latest plans for high-speed rail between Sydney and Brisbane are rapidly turning into another vote-buying circus for Western Sydney. Reports are being suppressed and it looks like the whole thing is turning into an episode of Utopia.

Reminds me of when the Rudd Federal Government, during the global financial crisis, was looking for “shovel-ready” projects to stimulate the economy. NSW had the Hunter Expressway project ready to go, but the Sydney government practically begged for the Feds to hand over the money for pie-in-the-sky vote-buying projects in Sydney that were nothing more than scribbles on the back of an envelope. Luckily Rudd wasn’t led astray, but it wasn’t because the State Government didn’t try.

Bring on another referendum, please. Based on recent performance, I doubt whether today even Liberal and Labor combined would persuade a majority in the north of the state to stay in an abusive relationship with NSW.

Giving somebody else’s money to your best friend.

All those jobs I couldn’t cope with