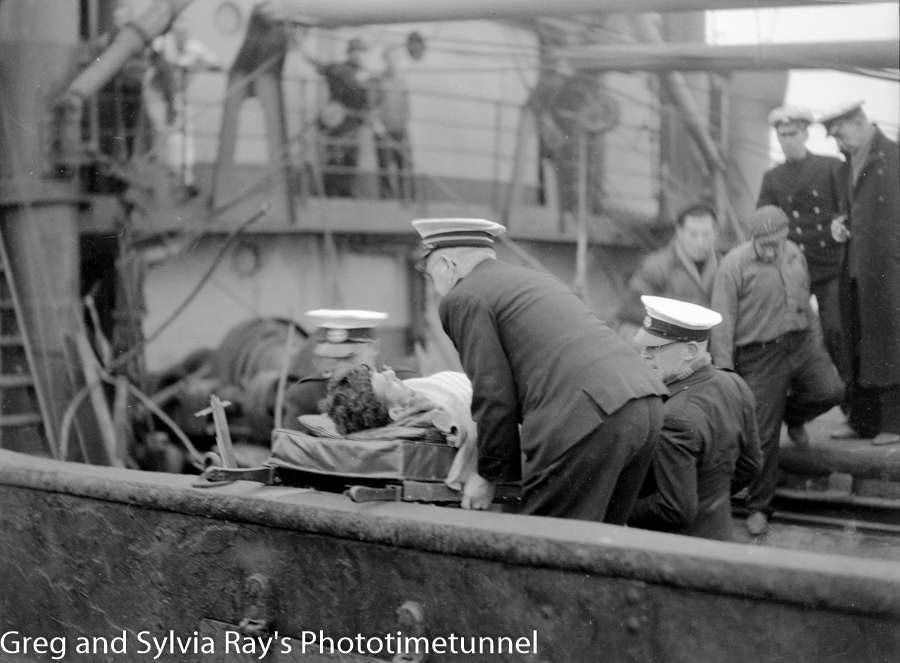 Wounded seaman being carried from the damaged freighter Allara in Newcastle, 1942

FOR young Daphne Roper the most important thing about any ship entering Newcastle Harbour in the difficult years of World War II was its funnel. Daphne’s father Alexander McMorran was a chief engineer with the “iron ships” of BHP, and she knew the company’s ore-carrying vessels bore two blue bands on the top half of their funnels. Seeing a ship with the two blue bands make its way around Nobbys was an exciting sight for Daphne, her mother Anne and her little sister Annie.

“During those years, with Japanese submarines haunting Australia’s east coast, each goodbye was bittersweet, leaving us all wondering whether it might be the last,” Daphne wrote.

“Newcastle’s shipping families were an insular lot. Censorship was our first lesson: ‘Don’t tell anyone when Daddy is coming home or sailing away’. We seemed always to be the first to hear the news when another ship went down – but not which one.”
In the early morning of June 3, 1942, BHP’s Iron Chieftain was sunk with the loss of 12 lives. The next day Scott Fell’s Iron Crown followed, with 38 lives lost. On February 8, 1943, BHP’s Iron Knight was torpedoed off Bermagui, with the loss of 36 crew members.
“I well remember feeling a strange envy for my friends whose fathers were in other services because they only had to face one goodbye. Dad did survive but he lost many friends to torpedo attacks.

The Allara’s lucky escape from a Japanese submarine

“Dad always insisted on air raid practice using the shelter he had built in our backyard. He was such a pedantic Scot engineer, holding the stopwatch after blowing a whistle to see how long it took Mum and we two daughters to reach the shelter – usually at night, of course.
“The ships could only berth on high tide in those days and he wanted to come home even if that meant a midnight berthing. So Mum would wake us and we would climb into our old 1927 Ford, driving over the treacherous wooden bridge across the industrial train lines at Tighes Hill and down to the BHP wharf where this darkened hull would glide into the berth with no more than a swishing sound.”

Daphne was at at Newcastle Girls High School, which had air raid drills and slit trenches in the schoolground.
“We needed to have identity tags – most of the girls had locket-like name tags on chains. Ours were ghastly BHP metal disks about 8 cms across and were the laughing-stock of my friends. Dad had them made as a foreign order of course. We also carried raid satchels containing a pannikin, soup cube, chocolate block, ear plugs and the rest now forgotten.”
When the war ended in August 1945, Daphne remembers school closing for the day and recalls feeling overwhelmed by the news.

The war is over, August 1945: Newcastle celebrates.

“I was crying as I walked down National Park Street. Other children were cheering and celebrating, but I was just in tears.”

From our book, Travelling Through Time.