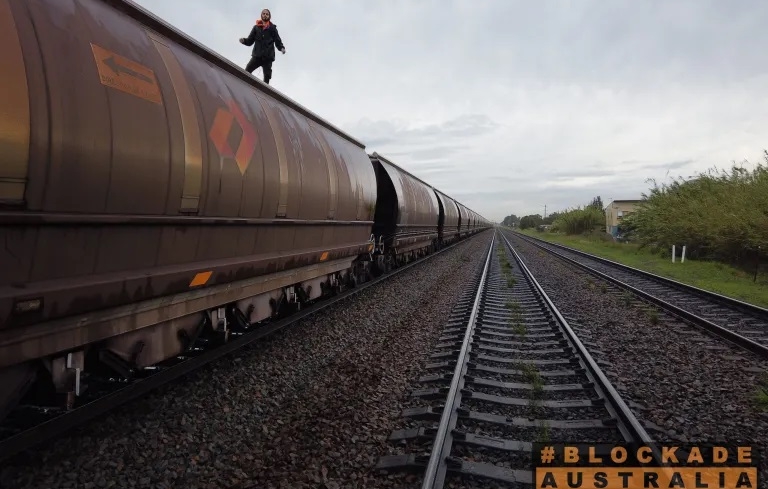 The 12-month jail sentence handed down last month to coal protester Eric Serge Herbert sent a chill of fear through activist circles. As it was intended to do.

The sentencing magistrate, Janine Lacy, imposed the severe sentence after Herbert delayed a coal train in Newcastle for a few hours. His action was part of a campaign by Blockade Australia, a protest group to which he belongs. While Blockade Australia sponsored 20 anti-coal protests aimed at the major coal port over a period of 11 days, the state’s police and court system responded with equal or greater intensity. Police arrested more than 20 people, issued many charges – some of them carrying potentially severe sentences – and raided the offices of an apparently unrelated environmental group.

Hunter Community Environment Centre was raided by police who confiscated banners and sign-making material. Anecdotally, some people claimed to have been pulled over by aggressive police officers and questioned about their activities on the basis of pro-environment or anti-coal bumper stickers on their cars.

This was, of course, against the backdrop of Australia’s controversial role in spearheading a rearguard action on behalf of rich and powerful mining and fossil fuel interests at the recent Glasgow Climate Summit. In 2015 author and activist Naomi Klein said of Australia that she couldn’t tell where the coal industry ended and the government began. Indeed, the seamless connection between the two is well-documented.

None of this is new. Mining companies have long had immense power in “Quarry Australia”. The problem is, though, that as time passes and the corporations get more anxious about their future profits, they put more pressure on the client/captive governments to give them more of what they want. To secure their finances they want access to resources which they can dig up and sell, and they don’t want environmental or cultural factors to stand in their way. A coral reef? So what? Ancient cave paintings? Kaboom. A lovely valley lined with scarce arable land? Kiss it goodbye. They want laws and approval systems that give them overwhelming clout to knock aside all objections to their plans and for the most part they have what they want. They want labour laws to help them get the cheapest costs of production they can achieve. They want hefty public subsidies to pay for the port, road and rail facilities they need to get the cheap resources to market. And generally, in Australia, they get all that. But as far as they are concerned it’s not enough.

There is already only the tiniest prospect of anybody stopping a well-connected mining corporation from getting anything it wants in Australia. With the planning laws stacked, the parliamentary benches loaded with cronies and the opportunities for legal challenge drastically limited, is it remarkable that people with concerns about mining projects feel obliged to turn to protest as the only remaining avenue that has not yet been closed off? Which is why, all over the world, the big corporations are pressing their captive governments to pass anti-protest laws and to turn the supposed shield of the “justice” system into another sword they can wield against anybody who tries to stand in the way of their profits.

Like in France, where water miner Nestle is attacking farmer and protester Didier Thouvenin through the courts.

Like in the USA, where lawyer Steven Donziger has been outrageously jailed through the machinations of oil company Exxon, whose actions he dared to expose.

And let’s not forget the actions of Indian miner Adani against its Australian critic Ben Pennings, who has faced an enormous and horrifically expensive struggle against the aggressive and very well-connected multinational.

These cases are just the tip of the iceberg, and it’s worth remembering that in many countries anti-mining activists simply disappear or are unfortunately killed, which tends to stop others following in their brave and dangerous footsteps.

While you may well disapprove of “radical greenies” stopping coal trains in Newcastle, you might stop to consider the bigger picture. Some of the world’s most powerful and rich corporations, which do pretty much whatever they want thanks to their money and power, have left very little room for their opponents to have their voices heard – much less influence real-world outcomes. Using their money and power to stack the system in their favour, they leave only protest as an avenue, and now that door is closing too. Meanwhile when the corporations pollute the environment, ignore the consent conditions they solemnly agreed to and get caught out lying, cheating and misbehaving in all sorts of ways, all they get is a slap on the wrist and a fine that they can pay from petty cash.

Do you think this is fair? I don’t.