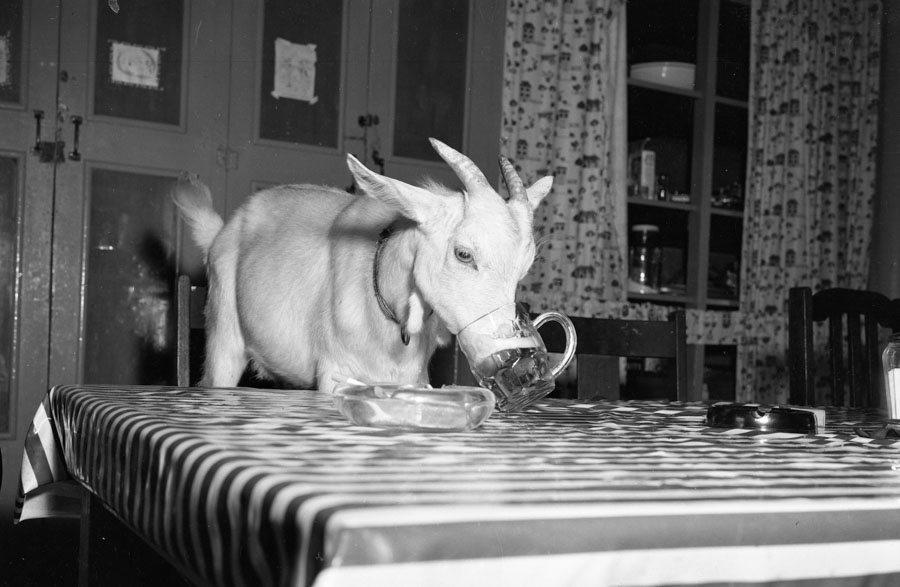 During his career as a press photographer, Ron Morrison took a lot of photographs of animals in many situations. Here are just a few.

In April 1961, the Oberland family of Tanilba Bay made news with their six-month-old pet goat, Maverick, who not only liked to drink beer, but also loved cigarettes. According to the article written at the time in the Sunday Mirror, Maverick used to steal any unguarded packets of cigarettes, rip them open and eat the smokes, one by one. He also ate any butts discarded at parties. His interest in beer began at a party when he drained half a dozen glasses while their owners weren’t watching. The drunk goat promptly fell off the table and had to find a bed to sleep off his intoxication. He also drank wine and black coffee, but wouldn’t touch soft-drinks. Apart from drinks and smokes, he also liked to watch TV, listen to the radio and play with the family Dalmations.

Topsy the wonder horse was a well-known travelling entertainer in the 1950s and early 1960s. A cross between a Shetland pony and a Timor pony, the diminutive Topsy mystified and delighted people by answering all sorts of questions with taps of her hoof and with nods and shakes of her head.

In 1954 Topsy performed for the visiting Queen Elizabeth and Prince Philip, as a special guest of the wife of the Queensland Governor, Lady Lavarack.

Trainer Tom Dennis was one of a big family born on the Clarence River. He suffered polio as a boy and was left with a crippled leg as a result. Tom’s father worked with horses and the youngster grew up with them, claiming that he could “make any horse follow me without touching it”. He was clearly a consummate trainer, and Topsy was an extremely intelligent horse.

Iris and John Walsh had a caravan business in the Newcastle suburb of Mayfield in the 1950s and 1960s. For a few months each year they used to leave their business in the hands of trusted managers and travel to Queensland. On one of their trips they were presented with a baby saltwater crocodile by a character named Bill Milne (aka Crocodile Bill) who caught her in the Herbert River, near Innisfail.

Iris used to travel on trains with Daisy in a shoebox, but when at home in Mayfield the little croc lived in a bath containing sand and water. Iris’s niece, Ardel Prout, told me how she used to have to sweep Daisy aside with a broom when she wanted to walk past her. One day, when Daisy had grown to about a metre in length, she so terrified a meter reader that the police were called. Daisy was handed over to reptile expert Eric Worrell, whose reptile park at Gosford was an important tourist attraction.

Fettler Allan Delaney lived for at least a few years in an elaborate tent near Thornton, NSW. He took great pride in the tent and its surrounds and often won prizes in the annual railway garden competitions. The snake in the photo was a regular traveller on local trains when Allan took it to Newcastle to show it off. He also had a cockatoo, which he had trained to alert him to the presence of visitors by calling out: “Allan, some bastard is coming!”. (Information courtesy of Allan’s workmate Fred Goode.)