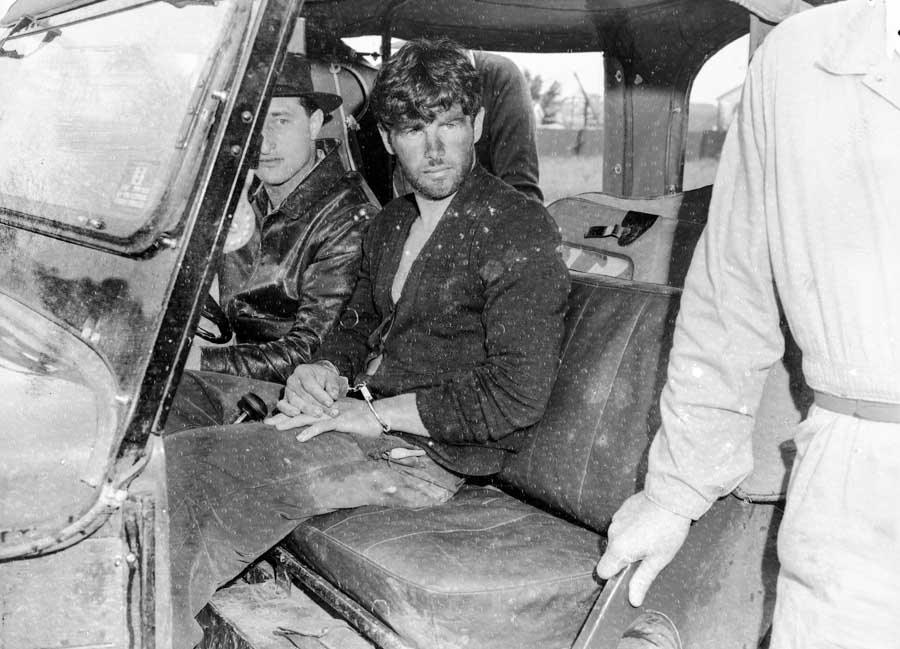 When Kevin John Simmonds and prison cellmate Leslie Alan Newcombe escaped from Sydney’s Long Bay jail on October 9, 1959, the manhunt that followed was the biggest in Australian history. Their killing of a prison guard at Emu Plains Prison Farm – where the pair had gone to steal supplies – guaranteed the full resources of the state would be put behind their recapture. Newcombe was picked up relatively quickly, about a fortnight after the escape, but Simmonds led the police a long chase, becoming in the process something of a celebrity.

When the manhunt moved into the Hunter Region of NSW, Newcastle press photographer Ron Morrison was on the job, and he captured some memorable images of the late stages of the hunt, and of Simmonds in police custody just after his dramatic arrest. All the photos in this post were taken by Ron.

Simmonds, born in Sydney in 1935, was raised and schooled in Griffith where he fell in his teenage years into the habit of criminality. He was in trouble for stealing from age 14, and by 18 he was sentenced to two years at the Mount Penang training school for similar offences. He became a habitual criminal, specialising in all kinds of thievery – sometimes armed – and was in and out of jail until he copped a 15-year sentence in August 1959.

The book Jailbreak, by Wendy Lewis, tells the story of how Simmonds spotted a potential escape route through a ventilator in an old chapel where prisoners were watching a movie, and how he and Newcombe squeezed through the ventilator to freedom, only to be seen trying to hotwire the prison superintendent’s car. Forced to run away, they hijacked a passing car and ended up hiding in Botany cemetery overnight and in Moore Park showground the next.

The pair stole another car and went to Emu Plains, familiar ground to ex-inmate Newcombe, where they overpowered prison guard Cecil Mills and beat him to death before stealing his gun. They planned to go and camp at Ku-ring-gai Chase, but got separated while stealing supplies. Newcombe went back to Moore Park to wait for Simmonds, who didn’t show. When he made a move to leave Sydney in a stolen car Newcombe was quickly caught, leaving Simmonds to head to the bush alone.

A couple of rangers spotted the fugitive digging a hole into which he planned to tow and bury a caravan and, when they investigated, Simmonds tied them up at gunpoint and stole their ute. Next day Simmonds evaded a roadblock at Wyong and warded off a pursuing policeman with his stolen pistol.

By now – a month after the escape – hundreds of heavily armed police, backed by dogs and helicopters – were on his trail. The police were frustrated and irritated at critics who panned their lack of success, but Simmonds was weakening from exposure and life on the run. He spent time at Morisset, then went to the small village of Mulbring in search of supplies. Spotted by farmers he took off, but soon two tracker dogs were on his trail and to evade them he was forced to jump into flooded Wallis Creek which carried him downstream. Next morning, November 15, a witness saw him steal a car in the foggy early dawn near Kurri Kurri. His time was up. Not long afterwards police cornered Simmonds near a clump of trees close to the railway line.

Simmonds was taken into custody by the famous (to some perhaps infamous) Detective Sergeant Ray Kelly, nicknamed “Gunner” for his record of killing suspects. Kelly – who had served on the bodyguard of Queen Elizabeth II during her 1954 visit to Australia – was later awarded an MBE.

In court on March 18, 1960, the two escapees were found guilty of manslaughter and given life sentences. Newcombe’s sentence was reduced on appeal and he was freed in 1970 but Simmonds didn’t live that long. Depressed and apparently worn down by jail life – particularly his treatment by fellow-prisoners – he hanged himself on November 3, 1966 and was buried in South Grafton cemetery.