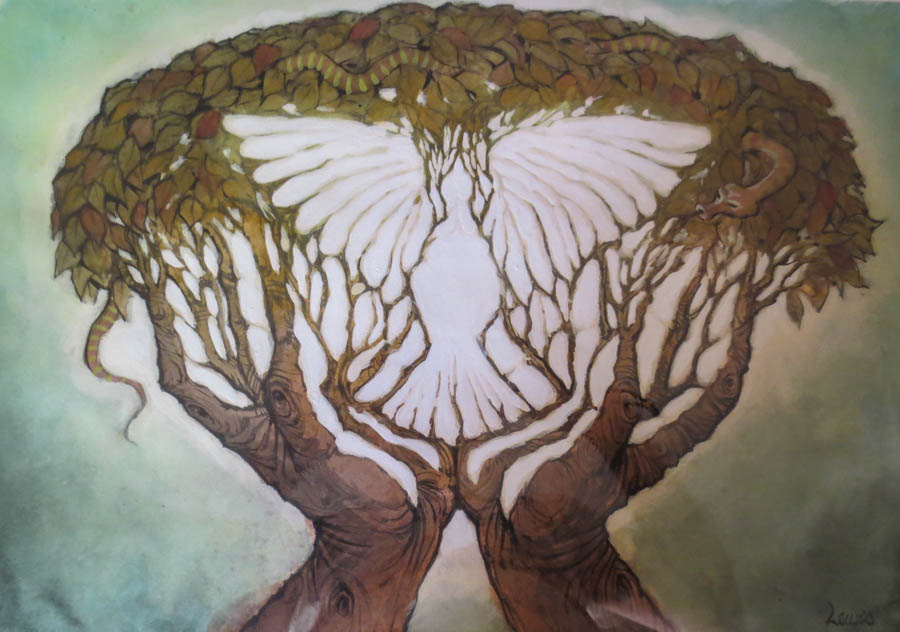 OF the many ancient myths and legends I have read and been told over my lifetime, the story of the Garden of Eden is perhaps the one I find most compelling.

As I child it was one of many Old Testament stories I was told in Sunday school, and it always felt troublesome, as though it was a story that needed to be revisited, re-examined and studied for some extra clues as to what went wrong at the very beginning of the human race.

The story as told in Sunday school was quite simple, on the face of it. The creator of the world made a man (Adam) and put him in a lovely garden where he had everything he needed. The creator would walk with Adam in this beautiful garden and at some point he also made Eve, a female human, from one of Adam’s ribs, apparently because Adam seemed a bit lonesome.

Among the numerous fruit trees in this great garden were the two really important ones: the tree of life, from which it was permitted to eat, and the tree of knowledge of good and evil, which was strictly banned.

Of course, Satan, the bad angel, the jealous powerful angel who always wants to muck everything up, sneaked into the garden disguised as a snake, persuaded Eve that the creator was unfairly withholding a great treasure from the humans by forbidding them to eat the fruit of the tree of knowledge. She nagged Adam about it and they ate the fruit. For some reason this made them suddenly ashamed of being naked and they made some rudimentary clothes from fig leaves. The creator turned up, saw the fig leaves and knew what had happened. Adam and Eve got tipped out of the beautiful garden and had to take their chances in the wide world, always guilty about that monumental act of disobedience which would have such consequences for their descendants for all time.

It’s a super-powerful story with a lot to unpack.

For a start it’s very clear on putting the blame with Eve. She doesn’t have equal status with Adam in the story – having been a latecomer on the scene. She is the one portrayed as being susceptible to the temptations of Satan and then being dangerously persuasive in getting Adam to break the ban on the fruit of the tree of knowledge. Pretty early in my youthful considerations of this story I consciously put these elements of the tale to one side. I sensed they were the work of male priests and storytellers with a vested interest in reinforcing their own ideas of a suitable relationship between men and women. In other words, it suited them to promote a story that put extra guilt on women and left men as the characters who would have been fine if only Adam hadn’t succumbed to Eve’s feminine wiles. And it isn’t surprising that even today a society with patriarchal roots puts almost all the emphasis of this big myth on the woman-as-tempter element.

But also not surprisingly, since this is a very ancient story with roots that intertwine through Islam, Christianity and Judaism – not to mention tales of the civilisations of antiquity before those three related religions were born – not every version puts Eve in the frame. For me, the blame-Eve narrative is a sideshow.

Which brings us to the basic element of the story: the fall. Humans disobey the strict instructions of their creator, they fall from grace and from then on, all their descendants who get taught this dark story at the knees of their grandparents carry the sense of guilt. We absorb the lesson that humans are damaged goods because of this original sin, and the fatal flaw can never be fixed until the end of time. That’s a terrible thing, when you think about it. And I feel like many of us raised from birth in the Judaeo-Christian tradition really have absorbed it: that it’s right at the core of our actual culture. But then I ask myself, is this dark foundational tale a cause of a cultural mindset, or was it a mythic explanation – in the very deep past – as to “why we can’t have nice things”?

Did some great primeval storyteller get asked how come people couldn’t just cooperate and be nice to each other? And why did every clever idea that looked like helpful progress seem to end up making more problems? Why couldn’t people just look around at this beautiful world and decide to enjoy it, instead of making war with each other and mucking things up?

Even today when people ask these questions – which they naturally do, very often – a standard answer seems to be that “it’s human nature”. That we are genetically predisposed to be a troublesome ape, capable of inspired and wonderful deeds and thoughts but ultimately doomed by the fatal flaw that we feel in ourselves but can’t quite precisely define.

If I were to say that the creator actually made it all perfect, but then this bad fallen angel got into the ears of humans and tempted them to rise above their proper station and that all the bad stuff follows from that, it might seem quite a useful explanation. And an all-encompassing one, since it covers everything that can go wrong with the species until the end of time.

Just a sidetrack here, but a potentially fascinating one. In his 1998 book, The Cosmic Serpent, anthropologist Jeremy Narby describes an intriguing personal epiphany and its creative and intellectual consequences. While visiting an Amazon tribe he ingests a plant-based drug and believes he sees coloured serpents which he later equates with DNA, the spiral structure at the heart of life as we know it. He is told that shamans can communicate with the serpents who can impart special knowledge about life and the world. It’s a very interesting book, even if you are only interested in the symbology.

Headlong out of Eden

Back to the “fatal flaw” – which in the biblical story might be summed up as the desire for more (more knowledge, more status – which the serpent promises can be had by eating the forbidden fruit). Plenty of people these days can easily accept that the “human nature” explanation goes beyond humans. It is easy to point out that most species follow much the same pattern, thanks to behaviours and needs that are wired into their genetic blueprint. Animals and plants, needing to take in a surplus of energy from their surroundings, behave “selfishly”. So cruelty was always a part of nature’s garden. We believe we differ from other beings in our corner of creation in being able to perceive that cruelty and put a label on it. So it’s not so much about good and evil, as it is about believing we can perceive them. The knowledge of good and evil, in other words. As in, the tree of knowledge of good and evil. Believing we having that knowledge, then, is the root of guilt and shame – hence the fig leaves, and hence the “fall”. What do we do about it? Well, I guess that’s what all the laws and commandments have always been about. Agreeing on right and wrong, so we can get on with our lives and minimise arguments. And how is that working out? We could jump from there to the forgiveness message in Christianity, but that’s a conversation for another day, perhaps.

As a child I found a couple of things upsetting about the story of the fall from grace. First, I was upset that the creator put the tree where Adam could get to it. I figured it could have been put out of reach. Next, and much more profoundly, I was upset at the apparent irreversibility of the damage. And the longer I lived, the more I pondered on the story of the fall and the more timeless I found its message. And I mean timeless in a literal sense. I’ve come to see it as a story about contemporary choices as much as it is a tale of an episode in a distant mythic past. To my mind we are still in the garden of the creator, still chewing through the fruit of the tree of knowledge and, heartbreakingly – collectively rushing headlong out of Eden.