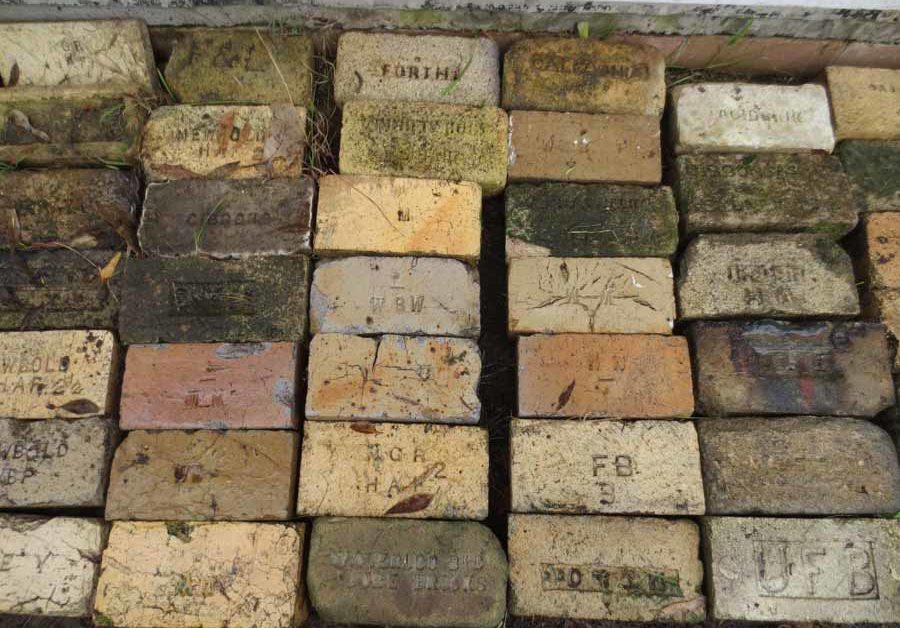 Some of Ian Sherman's collection of refractory bricks from Newcastle industries.

It all started in 1971 when Ian Sherman bought a house that had a lot of concrete all around it. Ian hated concrete.

So he hit on the idea of gradually replacing the despised concrete with bricks, and as he rode around on his motorbike he’d pick them up in ones and twos from demolition sites.

Already a bottle collector, Ian was predisposed to find something collectible about bricks and sure enough, when he noticed that many of them sported imprinted designs of various kinds his marvellous obsession began. Ian now has 6000 bricks in his suburban backyard in Newcastle, NSW – not to mention clay pipes and pavers, roof tiles and other brickyard memorabilia including wheelbarrows.

He has collaborated on six books about bricks since 1986, and is working on another one, with co-author Val Anderson, about the brickyards of the Newcastle suburb of Waratah.

Rewind to 1971 and, intrigued by the imprints on the various bricks he was bringing home, Ian started researching them, spending countless hours in the local library piecing together the stories about the bricks, the yards where they were made, the people who made them and the buildings that were made from them.

By now he was loading his motorbike with 10 bricks at a time, usually lumped into an old hessian sugar bag, and by now he was communicating regularly with the other six or seven collectors – mostly in Sydney – who would get together for regular swaps of interesting specimens gathered in their brick-hunting expeditions.

“There used to be several places around Newcastle where bricks were made. Now they’ve all gone,” Ian lamented. Particular concentrations of the industry were at Waratah, Merewether and The Junction and Cooks Hill. Some of the brickmakers who lived at Waratah used to travel to Minmi to work at another kiln there, walking out on Sunday night, camping all week and coming home again on Friday night.

The makers left their marks on the bricks, and these evolved from old arrow-shaped impressions on the early convict-made bricks to more involved designs pressed into the clay before firing. Ian is very proud that he managed, after some effort, to collect bricks with each of the four playing card suits. “I went to Bathurst for the spade, Singleton for the club and Grafton for a diamond with a club inside,” he said. He has raised some eyebrows at railway stations and airports because of his weighty luggage, and was prevented from taking bricks out of England and the United States. “They didn’t want their bricks leaving their country,” he said, ruefully.

Ian collects some bricks that other collectors ignore, notably refractory bricks used in high-temperature applications in the furnaces of Newcastle’s industries. Newbolds refractories is the name most famous for these products. That firms started in Lithgow but moved to Newcastle in 1918 after the BHP steelworks started up. Before Newbolds came to Newcastle, Ian said, the steelworks imported all its refractories from Scotland, and he has made a special collection of all these. “I’ve got more examples here than they have in Scotland itself,” he boasted.

The Newbolds house still stands on the corner of Croudace Street and Russell Road, New Lambton, and Ian wistfully dreams of knocking on the door and asking to be allowed to inspect the brickwork. “The tradition is that Mr Newbold handpicked every single brick that went into that house,” he said.

Some of Ian’s most treasured bricks were stamped with the names of the clients they were made for. For example, he has a single brick stamped with the name “Ruttley’s”, which came from Mount Pleasant, the demolished home at Adamstown once owned by noted Newcastle colliery owner James Ruttley. “Most of the bricks from Mount Pleasant went to Sydney to be recycled into another building,” Ian said.

Another favourite brick is stamped “RXH”, signifying Rhondda Exchange Hotel – the old pub at Teralba that served the miners from Rhondda Colliery. Again, almost all the bricks vanished when the building was demolished, but Ian found a lone sample embedded face-down in the former grounds of the hotel, used as part of a pathway to the clothesline.

Ian, who is president of Newcastle and Hunter District Historical Society, is often asked to be guest speaker at various groups, and he confidently states that he can talk for half-an-hour about any brick in his collection.

Interestingly, Ian worked for two years in the late 1960s with Newcastle City Council, at a the time when the council was clearing the cemetery of the old Christ Church Cathedral. According to Ian, he was assigned to take pieces of sandstone from the cemetery and reshape them for various landscaping jobs around the city.

“I was working with an Italian bloke who was supposed to be teaching me about stonemasonry,” Ian said. “The cemetery was a mess at that time. Vandals had been in and really scattered bits and pieces all around. You could just pick up bits of sandstone anywhere, and we were sent up to get pieces. I was cutting them into squares and we were using them as stepping stones near the war memorial and around the fountain in Civic Park, in King Street outside the Workers Club – anywhere they needed stone.”

Some macabre stories inevitably emerged. “They had to fix the wall in front of the cemetery and I had to cut and split stones for that,” he said. “They dug out a fair bit of earth on the cemetery side of the wall so they could straighten it and put some extra strengthening behind it. They took the soil over to a park near the Alder Park Bowling Club, but in a day or two people were complaining that their dogs were bringing home bones. Leg bones, arm bones, feet, hands. So it had to come back and get put back where it came from,” he said.

“Lots of pieces of headstones were taken to Blackbutt Reserve. We took them there. Go to the top pond and look at the rock walls around the edge. They are the headstones we brought over from Christ Church Cathedral cemetery.”

Some Newcastle businesses in 1891

Les Lumsdon, a life in cartoons